Children in the U.S. are being plied with powerful drugs to treat mental health concerns, but the medications don’t get to the root of the problem and often create new problems of their own — symptoms that are then treated with more medications. 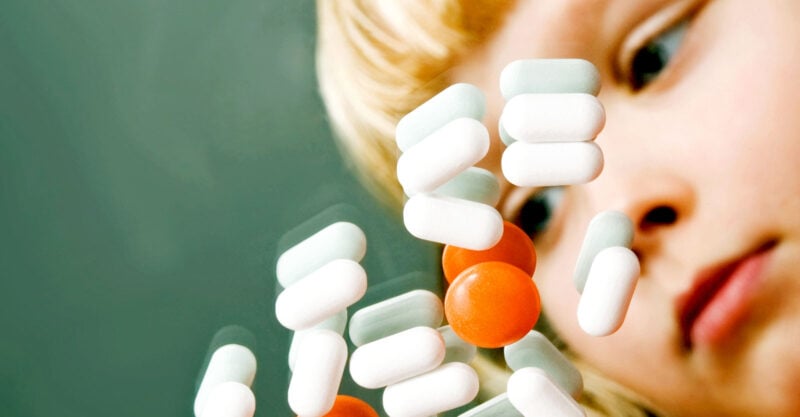 Children in the U.S. are being plied with powerful drugs to treat mental health concerns.

The medications, however, don’t get to the root of the problem and often create new problems of their own — symptoms that are then treated with more medications.

Note that this was prior to the pandemic, during which social isolation and other fears may have pushed some children with mental health issues “over the edge.”

Significantly higher rates of suicide-related behaviors, including suicide ideation and suicide attempts, also corresponded to times of increased COVID-19-related concerns, the end result being that even more children have likely been prescribed psychotropic drugs compared to in 2019, before the pandemic.

It’s hard to imagine a reason to prescribe nearly a dozen psychotropic medications to a healthy teenager.

In Renae Smith’s case, the reasoning stems not from a clear-cut medical need but from disjointed care and overprescribing physicians who seemingly had no other options for care than doling out drugs.

Smith, who was prescribed 10 psychotropic medications while she was still in high school, was profiled by The New York Times, which detailed her hefty regimen:

“In 2021, the year she graduated, New Horizon [Counseling Center on Long Island] was prescribing her seven: Focalin; Trintellix; alprazolam, an anti-anxiety drug known to be addictive; Lamictal and Topamax, a combination of seizure and migraine medication that can be used to stabilize mood;

“Rexulti, an “add-on” drug for adults who have major depressive disorder; and olanzapine, a drug used mainly for bipolar disorder and schizophrenia. (Ms. Smith said she was told that olanzapine would dull the side effects of the other medications and help her sleep.)”

Smith, however, did not have bipolar disorder or schizophrenia, nor seizures or migraines.

What she did have was feelings of depression and anxiety, along with some suicidal ideation, and a diagnosis of ADHD, which she received in fourth grade.

Dr. David Lohr, a child psychiatrist at the University of Louisville, told The New York Times that ADHD is the “foundation of polypharmacy,” a term used to describe the use of multiple medications at one time.

Other mental health conditions, including autism, also have high rates of psychotropic polypharmacy.

One systematic review found that up to 87% of children and youth with autism are prescribed two or more medications simultaneously.

The researchers urged “further research to determine appropriate practices related to the monitoring of adverse side effects and the long-term impact of polypharmacy among autistic youth.”

In another example of the rampant overprescribing, The New York Times reported:

“Instances of polypharmacy do not always begin with a diagnosis of A.D.H.D. Last summer, Jean, 22, who is being identified by her middle name to protect her privacy, grew increasingly agitated and depressed before her senior year in college.

“By April of this year, she was taking seven psychiatric medicines. They included lamotrigine, an anti-epileptic drug used for mood; hydroxyzine, gabapentin and propranolol for anxiety; escitalopram, an antidepressant; mirtazapine to treat major depressive disorder; and lithium carbonate, for general mood disorders, although it is also used to treat bipolar disorder, which Jean has not been diagnosed with.”

Writing in Frontiers in Psychiatry, a team of researchers called for “safer” use of Abilify and Risperdal (risperidone) in children and adolescents after recording a range of adverse drug reactions related to their use.

Ironically, they noted, “Psychiatric disorders were the main related adverse events for aripiprazole (20.2%) and among these, suicidal behavior was one of the most reported (14.9%).”

Other reactions, including weight gain disorders, reproductive system disorders and metabolism disorders, were also reported, with 90% of them being serious.

One drug prescription turns into two, and more

Using drugs to cover up the symptoms of mental health conditions in children is a slippery slope that often leads to overprescribing.

A study published in the journal Pediatrics in 2020 revealed that not only is the use of ADHD medication increasing but so is psychotherapeutic polypharmacy.

From 2006 to 2015, prescriptions for ADHD medications among patients aged 2 to 24 years increased from 4.8% to 8.4%, while the percentage of those who were prescribed a drug for ADHD as well as at least one other medication rose from 26% to 40.7%.

Most often, stimulants and α-2 agonists were prescribed together to treat ADHD, while the most common psychotropic agents prescribed in addition were selective serotonin reuptake inhibitors, or SSRIs and second-generation antipsychotics, or SGAs.

“Surprisingly,” the researchers noted, “SGAs were co-prescribed with ADHD medications most frequently at visits in the youngest patients (2–5 years of age)” — possibly in an attempt to treat sleep difficulties.

“[T]he high use of multiclass drug combinations in children and adolescents is concerning, given their vulnerability to adverse effects and the unknown impact of long-term neurologically altering substances on the development of an immature brain and nervous system.”

“Overprescribing pills is ultimately setting up children for a downward spiral of increasing side effects and worsening health. Indeed, for all of the risks of adverse effects, “the meds don’t work all that well,” Dr. Robert Hilt, a psychiatrist at the University of Washington, told The New York Times.

A separate review published in the Journal of Child and Adolescent Psychopharmacology found “minimal evidence of benefit for mood or anxiety comorbidities” when SSRIs were added to other ADHD treatments, while adding Strattera (atomoxetine) also led to “mixed reports of benefit, including the only small RCT [randomized controlled trial] showing no benefit.”

It should be noted that it’s not only psychotropic medications that are often prescribed simultaneously.

Pain medications, including highly addictive opioids, may also be prescribed in potent polypharmacy cocktails to children.

According to a retrospective cohort study published in the journal Pain Medicine, out of 25,321 children between the ages of 2 and 17 who suffered from chronic musculoskeletal pain, 26% were prescribed two to four medications at once.

Even among the very youngest children, polypharmacy is a problem. Data released in 2014 from the Citizens Commission on Human Rights showed hundreds of thousands of toddlers were prescribed psychiatric drugs and more than 274,000 children from birth to 1 year old were included in that mix.

According to their figures, the numbers of children aged birth to 1 year old on these medications were:

Children in foster care at risk of polypharmacy

Children in the foster care system are at particularly high risk of being prescribed multiple drugs, regardless of also receiving psychotherapy.

Those from low-income families are also unfairly affected, and both populations — children from low-income households and those in foster care — are at risk of what’s known as high-level psychotropic polypharmacy, which describes the use of multiple drugs with:

As noted by researchers in BMC Psychiatry:

“Children in foster care are at great risk for behavioral and mental health problems due to trauma, stress and exposure to numerous adverse childhood events. In complex cases, psychotropic polypharmacy may be needed and appropriate.

They pointed out the many known side effects of psychotropic medications, including increases in:

Metabolic dysfunction is another known risk, which requires close monitoring while medications are taken.

However, the researchers found that rates of metabolic screening in foster care children are low:

“The concern for metabolic dysfunction is even greater for children in the foster care system and those suffering from other traumas and toxic stress as these factors may compound the damaging effects of the medications on metabolic systems. Caution is warranted for all psychotropic medication use, especially HLPP and antipsychotics.”

A holistic approach is needed

The BMC Psychiatry study found that, among children in foster care, “disruptive and impulsive behaviors predicts HLPP use.”

Other children may be set on the polypharmacy cycle due to inattentiveness, hyperactivity or other behavioral issues, conditions that can often be resolved with therapy and lifestyle changes.

Toward this end, addressing both exercise and diet is essential.

Executive control is the ability to maintain focus, working memory and cognitive flexibility (or switching between tasks), and is often impaired in children with ADHD.

Exercise appears to benefit cognitive, behavioral and socio-emotional functions in children and adults with ADHD.

As for diet, the evidence suggesting that gluten sensitivity may be at the root of a number of neurological and psychiatric conditions, including ADHD, is quite compelling.

One study went so far as to suggest celiac disease should be added to the ADHD symptom checklist.

Exposure to food additives, an imbalanced gut microbiome and a deficiency in omega-3 fats are other essential pieces to mental health.

If your child is struggling with ADHD or ADHD-like symptoms, or other behavioral or mental health conditions, I recommend consulting with a holistic physician who is experienced in treating these conditions using natural methods.

A holistic approach is needed, one that addresses the key tenets of good health and creates real wellness instead of attempting to cover up symptoms with more pills.

If you live in the U.S. and are having thoughts of suicide, dial 988 for the Suicide & Crisis Lifeline. If you are in danger of acting on suicidal thoughts, call 911 for immediate assistance.