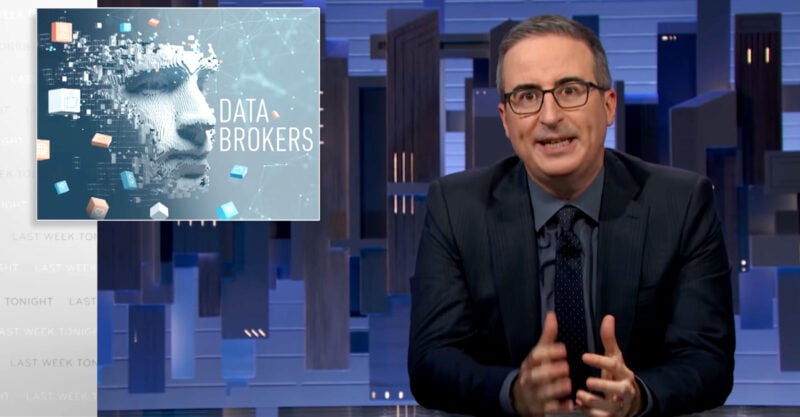 On Sunday’s episode of HBO’s “Last Week Tonight With John Oliver,” Oliver exposed how data brokers get our personal information — and what they do with it.

“This isn’t just about the convenience and/or irritation of targeted ads,” Oliver said. “Data brokers operate in a sprawling unregulated ecosystem which can get very creepy very fast.”

Data brokering is the multimillion-dollar industry of collecting personal information and then reselling or sharing it with marketers and others.

As one expert puts it, data brokers are “the middlemen of surveillance capitalism,” Oliver said.

Oliver shared an instance of a man receiving a mailing from OfficeMax that had the words “daughter killed in car crash” in the address line.

Oliver cautioned, “Basically every time you interact with society, you are leaving little breadcrumbs that can be gathered together and sold, and much of this happens online.”

Data collection happens through the use of cookies, Oliver explained, which in the early days of the internet were simply a way for websites to remember their visitors.

But cookies now involve third-party companies planting a piece of code in your browser that allows them to track your activity on the internet.

“I don’t know about you,” Oliver said, “but I don’t want a whole crowd of strangers watching what I search for on the internet. Not because it’s gross — because it’s private. Private doesn’t have to mean gross.”

Companies can compile lists of people with certain medical conditions or sexual preferences within certain zip codes and sell the lists to marketers, he explained.

While medical information you tell your doctor is protected by law, searches you perform online are not. “It’s a system that seems ripe for abuse,” he said.

Although data brokers often claim to “de-identify” data before selling it, it is very easy to find out who is behind a number or a code, he said.

A 2019 study published in Nature found 99% of Americans could be correctly re-identified in any data set using just 15 demographic attributes, among them age, sex and marital status.

A 2020 article in Vice found the app Muslim Pro, which reminds Muslims to pray, had been selling user location data to a broker that supplied information to the U.S. government.

To throw data brokers off your trail, Oliver suggested:

Although private settings should be the default, maintaining privacy is the user’s responsibility, Oliver said.

The U.S. needs a comprehensive federal privacy law, he said, but we shouldn’t expect it any time soon, thanks to data brokers’ lobbying efforts — and politicians who use the data for their campaigns.