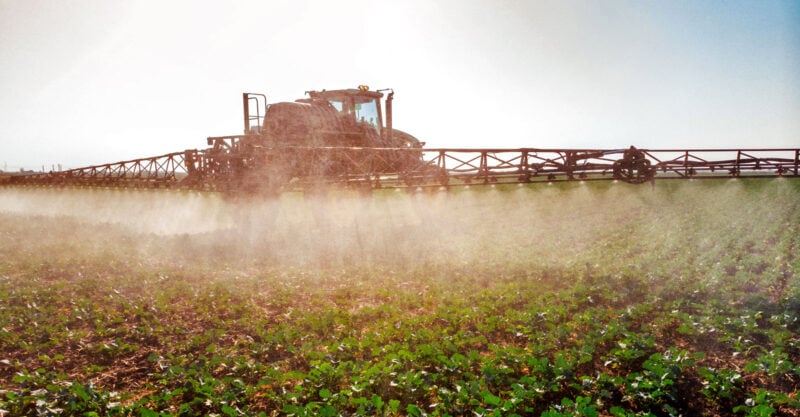 Rural populations in the U.S., a new study finds, are particularly at risk for agriculture-related exposures associated with respiratory diseases and other kinds of airway inflammation.

The exposures include those to pesticides, livestock facilities, smoke from biomass burning, agricultural dust and endotoxin.

Beyond Pesticides has regularly covered the relationships between pesticide exposures and asthma (including the outsized risks for children), chronic obstructive pulmonary disease (COPD) and other respiratory anomalies.

Published in Immunology and Allergy Clinics of North America, and authored by a team from the Division of Allergy and Immunology at the University of Nebraska Medical Center in Omaha, the study used data from the past five years plus literature reviews of research on asthma and respiratory issues in rural populations.

The team notes that multiple studies have suggested that “farming-related exposures as an adult increase the risk of asthma or asthma-like symptoms development,” adding that agricultural workers are exposed to “a complex working environment with associated disease outcomes dependent on the interplay of many factors, including genetics, gender, history of atopy [predisposition to immune response against a variety of antigens and allergens], duration of exposures, livestock diet and pesticide exposures.”

Beyond Pesticides has reviewed the particular exposure risks farmworkers endure and health outcomes; for example, agricultural (and other) workers exposed to pesticides and other contaminants are at increased risk of developing a lung condition known as idiopathic pulmonary fibrosis.

The study researchers assert that, “When compared with those who live in metropolitan counties, dwellers of rural areas . . . have increased percentages of preventable deaths from the five leading causes of death (i.e., cancer, heart disease, unintentional injury, chronic lower respiratory disease and stroke), with the largest disparity demonstrated from chronic respiratory disease.”

They add, “Despite significant progress in farming technology, modern farming is still associated with many hazardous exposures, and is consistently identified as one of the most dangerous industries in which to work, from a health and safety perspective.”

The paper also notes that rural community members often have less access to appropriate health care and worse health outcomes than their urban cohorts, and points to barriers such as transportation problems, costs, concerns about immigration status and language access.

A 2021 study cited in the subject paper concluded that asthma mortality rates are significantly higher across all ages groups in areas with populations lower than 10,000 (with an average incidence rate of 13.4 per million residents) than in large metropolitan areas (at an average rate of 8.8 per million).

This study and one from 2015 challenge the common perception that urban asthma rates are “off the charts” compared with rates in other areas.

According to the researchers, there is increasing evidence that pesticide exposures contribute to both allergic and nonallergic asthma and “wheeze.”

The U.S. National Institutes of Health defines “wheeze” or “wheezing” as “the symptomatic manifestation of any disease process that causes airway obstruction.

Wheezing is commonly experienced by people who have asthma but can also be present in individuals with airway foreign bodies, congestive heart failure, airway malignancy, or any lesion that causes narrowing of the airways.”

In babies and young children, wheeze often is a clinical sign of lower respiratory problems, the “lower respiratory” tract comprising the lungs, bronchi, trachea and larynx.

Farmworkers can be exposed to pesticides through direct inhalation or via contaminated dust during handling, mixing or spraying (or other kinds of application).

Of the herbicides reviewed, nearly 42% were associated with a wheeze outcome; 36% of insecticides showed this relationship.

Several other studies reviewed by the University of Nebraska team show significant effects of pesticide exposures on the respiratory health of participants.

The mechanisms that underlie these associational relationships are not well understood, say the authors.

They point to the need for research on these dynamics; what is obvious is that both allergic responses and non-allergic responses share some form of immunological inflammatory reaction to pesticide (and other exacerbating) exposures.

The research team looked at impacts of exposures to livestock and any relationships to respiratory issues. Farmworker exposure to livestock and their environs appears to bump up the risk of developing asthma and COPD, as well as worsening existing asthma.

Unclear are the origins of causal or exacerbating exposures; the authors ask, is it exposure to the animals themselves, or exposure to some organic materials (e.g., hay, straw, dust, animal feed) in the farm environs that contribute to the heightened risk?

The researchers do point to the noxious exposures that can come with working on concentrated animal feeding operations (CAFOs) — which sector Beyond Pesticides has repeatedly taken to task — such as gases (not least among which is the methane from animal waste), organic dusts, fungal spores, particulate matter and whatever pathogens are “available” via the vast quantities of waste such facilities produce.

Again, the paper cites several studies showing that incidence of asthma is higher not only for farmworkers, but for populations that live less than three miles from CAFOs, as compared with those who live farther away.

Another research project, with more than 22,000 farmer subjects, found that raising livestock on medium-to-large scale operations was positively associated with symptoms of chronic bronchitis.

Next up on the list of problematic exposures of agricultural workers and rural populations is chronic inhalation of agriculture-related dust, which — in addition to the particulates it may contain from grains, feed, soils and biological aerosols from plant and animal matter — may harbor synthetic pesticide and fertilizer residues.

Ongoing inhalation of this dust is associated with increased incidence of airway inflammatory diseases, including asthma, chronic bronchitis and COPD.

The particulates in dust play a part in development of disease, but so, too, do the various microbiota that may be part of a dusty agricultural environment.

A disruption of the homeostasis of the human microbiome (known as dysbiosis) has been associated with asthma and other respiratory diseases.

In addition, pesticide exposures can alter the gut microbiome, which mediates a significant portion of human immune response. Currently, there is no treatment that can reverse respiratory diseases that arise from chronic agricultural dust exposures.

The researchers also conclude that endotoxin — primarily a lipopolysaccharide found in the outer membrane of Gram-negative bacteria — is found at higher levels in the indoor/household dust in rural farming communities, as compared with urban or rural non-farming areas. (An endotoxin is a toxin present inside a bacterial cell that is released when the cell disintegrates, and can be responsible for characteristic symptoms of a disease.)

The common endotoxin, lipopolysaccharide, is known to interact with the human immune system, and to have an impact on asthma — amplifying its symptoms and those of COPD.

One of the particularly interesting studies the team reviewed show that, although other research has shown increased risk of asthma in adults with endotoxin exposures, children may experience some protection from asthma due to childhood endotoxin exposures.

The 2016 study looks at children in two different farming communities — an Amish enclave in Indiana and a Hutterite community in South Dakota. The populations have similar ways of living, especially related to factors that might influence asthma, but exhibit a large difference in the prevalence of asthma.

The notable difference between the two communities is that the Amish live on single-family farms and use traditional farming practices, while the Hutterites live on large, communal farms and use industrialized agricultural practices.

Last on the “risk list” in this study are the respiratory impacts of the burning of biomass in agricultural areas.

This burning can be the combustion of wood, crop residue, and/or animal waste as fuel, or the burning of crop residue in the field (sometimes called “stubble burning”) to clear it for the next round of planting.

Both are associated with the airway inflammation of asthma and COPD.

A study based in rural Arkansas compares emergency room visits for asthma and COPD between Craighead County, which burns roughly half of its production acreage post-harvest, and Sebastian County, which does not use any crop burning.

ER visits for Craighead were 21% higher for asthma and 17% higher for COPD, compared with Sebastian.

Unsurprisingly, particulate matter levels were significantly elevated in Craighead — but only during the fall season.

As for potentially protective nutritional impacts on chronic lung disease: the research team reviewed several studies from which it concludes that consumption of dietary DHA may help reduce airway inflammatory disease in those exposed to agricultural dusts.

It also evaluated a study that suggests that consumption of raw milk early in life translates to better pulmonary function in adulthood, though the mechanisms for either of these effects is not yet understood.

The subject study identifies multiple factors that appear to exacerbate or contribute to development of chronic respiratory issues — asthma (both allergic and non-allergic), chronic bronchitis and COPD chief among them — in both farmworkers and residents of rural communities.