My husband, Alejandro, died from lung cancer in 2010. He was just 50 years old. For years, one of my husband's jobs was to tend to the lettuce fields where we worked in Greenfield. 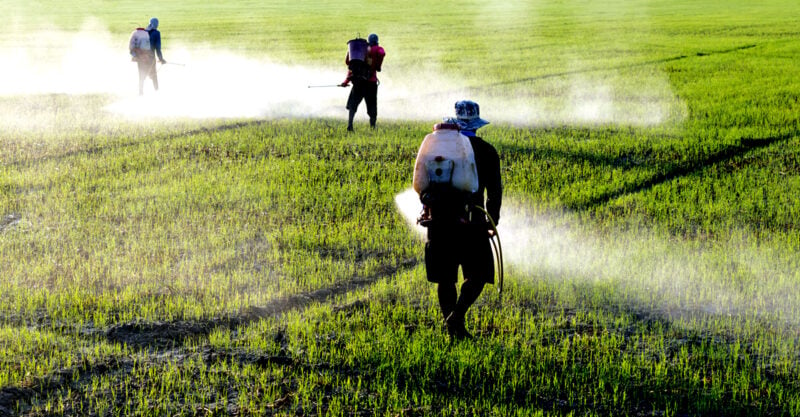 My husband, Alejandro, died from lung cancer in 2010. He was just 50 years old. For years, one of my husband’s jobs was to tend to the lettuce fields where we worked in Greenfield, California.

Right after spraying pesticides and weed killers, he would go into the fields, working up the soil with a short-handled hoe so that the lettuce could grow.

He would get really close to the ground, breathing in the dust and also the chemical residue that was there.

A few years before he died, Alejandro developed a severe respiratory condition. He couldn’t lie down because when he did, it felt like he was drowning.

A doctor told us that he needed a lung transplant.

We waited, but no donors were found.

His breathing worsened to the point that he needed to be hospitalized and put on a ventilator. One day, as the nurses were getting him ready for his walk, he suffered a stroke.

I rushed to his side. He died there in my arms, saying “mis hijos, mis hijos” [My kids, my kids].

This is my family’s story, but it’s like too many others. Each year as many as 20,000 farmworkers are poisoned and an estimated 11,000 fatalities occur worldwide.

Consider: In a country where the average life expectancy is 78 years, the people who work in the fields tend to live to be just 42.

The families left behind have few resources to turn to.

When Alejandro passed away, a doctor who knew that he was a farmworker told me that the cause of his death was most likely the result of regular exposure to pesticides at work.

Then a lawyer who heard about what happened told us that we could sue the company that manufactured the chemicals that Alejandro had been exposed to.

One problem was a lack of direct evidence. Another issue was that my husband’s employer never told him or the workers the names of the chemicals that were used on the farm.

I felt depressed, helpless, and alone when Alejandro passed away. He was too young. We were confident we knew why he died, but we couldn’t do anything about it.

As for myself: working thirteen years in grape vineyards and also with chemicals has left me with asthma and psoriasis.

I was seriously injured specifically after I fell while tying grape vines in one orchard, which has required multiple surgeries and regular medical attention.

I had to leave work completely.

What has helped me turn all this pain into positive action was in 2013 getting involved in the California-based group, Lideres Campesinas.

Connecting with other women who run the group, I have learned that what happened to my husband is all too common.

Our country’s approximately three million farmworkers daily risk their lives when they work with hazardous chemicals so that the rest of us can eat.

Pesticides have been linked to causing birth defects, neurodevelopmental delays and cognitive impairment among pregnant farmworkers.

These facts of farmworker life are not simply tragedies. They are the result of policy decisions the U.S. government can change right now.

The problem is that many farmworker women report that their employers too often receive advance notice before inspectors arrive.

The EPA also needs to reverse recent decisions that have drawn lawsuits from Alianza Nacional de Campesinas, along with other advocacy and community health groups.

The first is the agency’s 2020 decision to weaken safeguards — namely a rule saying that pesticides can’t be applied when anyone is within 100 feet of the site — that prevented farmworkers and rural residents from being accidentally sprayed with toxins.

The other problematic decision is the EPA’s 2021 approval of the continued use of the deadly pesticide paraquat for 15 more years, even though this chemical is currently banned in 32 countries and has been linked to Parkinson’s Disease.

The safeguards should be restored, and paraquat banned from use.

U.S. lawmakers have a role to play too.

The Protect America’s Children from Toxic Pesticides Act, introduced last year by Senator Cory Booker (D-NJ), aims to remove dangerous pesticides within our farm system by updating the 1972 Fungicide and Rodenticide Act to ban the most damaging pesticides that have been scientifically proven to harm the safety of people and our environment.

Improved oversight and new laws will not bring my husband back.

Yet in working together, I hope that in Alejandro’s memory we can make changes that would help heal those of us who have been harmed by working in our country’s food system and prevent more senseless deaths.

Audelia Garcia was a farmworker for over 13 years before becoming the board president of the California-based organization, Lideres Campesinas. She is also a board member of the nationwide farmworker women organization, Alianza Nacional de Campesinas.