As a hunger strike protesting Greece's COVID-19 vaccine mandates for healthcare workers entered its 17th day, one suspended healthcare worker yesterday told a crowd of protesters in Athens, “we don’t need vaccine passports to be free.” 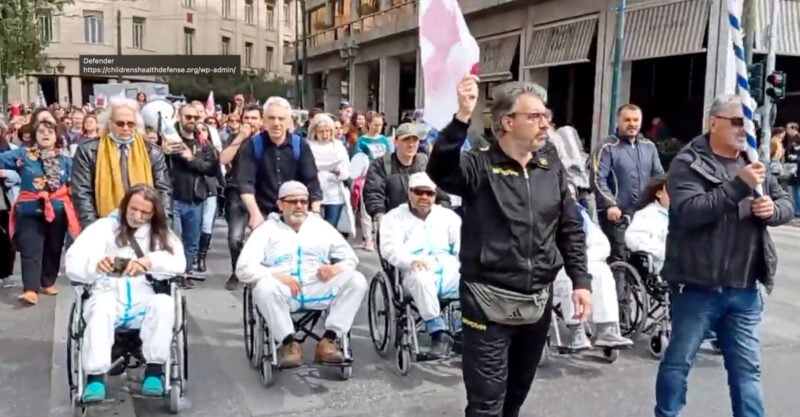 As a hunger strike protesting Greece’s COVID-19 vaccine mandates for healthcare workers entered its 17th day, one suspended healthcare worker yesterday told a crowd of protesters in Athens, “we don’t need vaccine passports to be free.”

Speaking outside the Greek parliament building, Zoe Vagiopoulou, one of the hunger strikers, delivered a speech that made waves on Greek social media.

“We have been on hunger strike for 17 days for the right to work. Work is a right that nobody can deny us. We are 7,500 families [referring to the number of healthcare workers who remain suspended] outside of the public health system, which our parents and grandparents have paid into but which we are excluded from due to permanent decisions in violation of the law and constitutional order.”

Vagiopoulou is one of five Greek healthcare workers who joined a hunger strike on March 21 to protest their suspension and the ongoing COVID-related restrictions.

Greece’s health ministry placed on unpaid leave all healthcare workers who did not meet the Sept. 1, 2021 deadline for the mandatory COVID vaccination of medical staff and who did not receive a booster dose by March 31.

Many of the estimated 10,000 healthcare workers who did not get vaccinated have organized ongoing protests in what has been the most consistent and sustained opposition to the restrictions imposed by Greece’s government — measures recognized as the strictest such policies in Europe.

In an interview with The Defender, Argyri Kagia, a radiologist barred since Sept. 1, 2021 from her job at a hospital in Athens for refusing the vaccines, discussed the hunger strike and protests.

Kagia said five healthcare workers, all but one identified solely by their first names – Lambros, Nikos, Pericles, Sofia and Zoe Vagiopoulou — were the original participants.

She described their motivation to commence a hunger strike as “a personal decision” and “a last-ditch effort to be heard.”

Since the hunger strike began, Kagia said, the suspended workers have established a permanent presence outside the Greek Ministry of Health “every day and night in shifts.”

Protests and marches are also organized “towards various government ministries and public bodies.”

The hunger strike represents an unprecedented new phase of protests against COVID-related mandates and restrictions.

However, Nait and Paysant ended their strike in October 2021. Paysant told French media that “after a month, it is useless, people get used to it and nobody cares,” adding that a representative of the French state told them they were “the collateral damage” of the vaccine mandate.

The actions of the Greek government in response to the hunger strike and protests indicate it may hold a similar view of unvaccinated healthcare workers.

On March 30, during a march toward the Greek parliament, riot police fired tear gas at the protesters, including the five wheelchair-ridden hunger strikers, one of whom was injured.

The incident was captured on video and circulated on Greek social media, though the news outlet that initially published the video online later removed it without explanation.

According to Kagia, “the major and well-known media [of Greece] have not reported” about the hunger strike.

As previously reported by The Defender, Greek media received €40 million ($43.6 million) in state subsidies since 2020, purportedly to help keep the struggling outlets afloat.

The funding is widely viewed in Greece as a way to encourage favorable coverage of the government’s heavy-handed COVID response.

Kagia told The Defender despite the continued protests, the Greek government on March 30 voted to extend until December 31 the suspension of unvaccinated healthcare workers, which was due to expire March 31.

The Greek government has thus far refrained from outright firing the workers, despite threats to do so.

Without a salary or ability to work, however, they are essentially unemployed, “without pension contributions” and with most “surviving on borrowed funds and with the help of relatives and supporters,” according to Kagia.

Assimoula Economopoulou, a biopathologist at Elpis hospital in Athens who is unvaccinated and participating in the protests, told The Defender she contracted COVID in August 2021, but was informed that her natural immunity, while allowing her to obtain a COVID passport valid until March 2022, would not be recognized for employment purposes and that she was obligated to get vaccinated.

As previously reported by The Defender, Greece was the second European country, after Austria, to impose a vaccine mandate on segments of the general public, requiring everyone age 60 and over to get vaccinated by January 15 or face a monthly fine of €100 ($109) — a significant sum in Greece, where the average monthly pension is €722 ($787).

However, the Greek health ministry revealed the imposition of the fine would be suspended as of April 15, and that the measure will be “revisited” in September.

Greek authorities indicated availability of the second booster will extend to the general population by September.

The monthly fine does not appear to have convinced most unvaccinated seniors to get the vaccine or even to pay the fine — as an estimated 500,000 seniors remain unvaccinated or have not received a booster, and only 14% of those fined have reportedly paid.

Vaccine passports, along with masks, are still mandatory in Greece for accessing many public and private venues, such as restaurants and most retail shops, despite an initial sunset date of March 31 for the passports.

Most other European countries and U.S. jurisdictions have lifted such measures.

While the government has hinted that the vaccine passport mandate may be lifted after Greek Orthodox Easter (April 24), government officials did not specify an exact date.

As previously reported by The Defender, Greece was the first country to formally propose the implementation of digital vaccine passports throughout the European Union, and the extension of these passports to include the COVID booster dose.

Until recently, Greece was the only EU member that enforced a shorter period of validity for its vaccine passports: seven months for those vaccinated and three months for those with a previous COVID infection, instead of nine and six months, respectively, in the rest of the EU.

Pressure from the EU led Greek authorities to match the EU period of validity of its passports as of April 2.

Nevertheless, recent statements by the doctors comprising the Greek government’s COVID committee — which enjoys legal immunity — indicate models predict a new “surge” in October, at which time the passports may be reinstated “if needed.”

The country recently reported up to 76 COVID deaths daily, in a country of just over 10 million people.

On March 29, for instance, Greece reported 28,933 COVID cases, while on the same day, the U.S. recorded 35,343 cases, with a population approximately 33 times larger than that of Greece.

Blame for this excessively high number of reported COVID cases and deaths, according to the Greek government’s COVID committee, lies with the “segment of unvaccinated people in the much older age groups.”

Others, though, have a different explanation.

Economopoulou, in her interview with The Defender, highlighted the poor state of Greek public hospitals as an important contributing factor:

“The overcrowding in hospitals is not due to COVID. There is a waiting period for routine surgeries and routine medical appointments, exams and chemotherapy.

“Each winter, crowding in the hospitals due to seasonal flu becomes a news story for the [Greek] media.

“The Greek health system has been developed with hospitals at its core. The ‘family doctor’ barely exists as an institution, while regional and local medical clinics are poorly staffed and poorly equipped.

“As a result, people visit hospitals for any reason, even the common cold, and hospitals on duty get exceedingly crowded. They do not have sufficient facilities to treat this many patients, and there is a shortage of trained and capable staff that can take measures to mitigate the spread of hospital-acquired infections.

“Greece ranks among the highest in Europe in such infections. Patients who are intubated and who remain in intensive care units (ICUs) for an extended period are therefore infected, and such infections, particularly in ICUs, are the main cause of most of these deaths.”

Medical equipment in public hospitals has, in many instances, not been replaced since it was purchased in 2004 during the lead-up to the Olympic Games, held in Athens that year, Economopoulou said.

As a result, “most of this equipment is no longer reliable and much of it is obsolete,” she said.

Austerity measures, which led to sharp cuts in public health expenditures over the past decade-plus, are to blame, according to Economopoulou, who added there have been no new hires in the public health system since 2016 — the first such hirings in nine years — while medical staff who retired in recent years have not been replaced.

As a consequence, “Greek hospitals cannot meet the needs of the country’s population. They are understaffed and the existing staff is overworked,” said Economopoulou.

Kagia told The Defender that even though a “relatively small percentage” of initially unvaccinated healthcare workers “succumbed” and returned to their jobs, most have not.

She also noted the unvaccinated medical workers who have been suspended from their positions have not been replaced, despite government promises to the contrary, placing additional pressure on the healthcare system.

Such pressure is then blamed on the unvaccinated and used as a justification for continued restrictions.

Kagia said the unvaccinated workers are fighting for more than just the restoration of their jobs. They are also calling for the end of vaccine mandates and the preservation of free speech.

According to Economopoulou, “An increasing number of unvaccinated medical workers have come to understand that aside from their own personal circumstances, there is an additional reason to protest: preserving the right for each individual to preserve their bodily integrity and make what they believe is the best choice for themselves.”