Every Sunday at 8 p.m. London time, Global Walkout announces a new “step” or action people can take to extricate themselves from the globalist agenda and impede its progress. 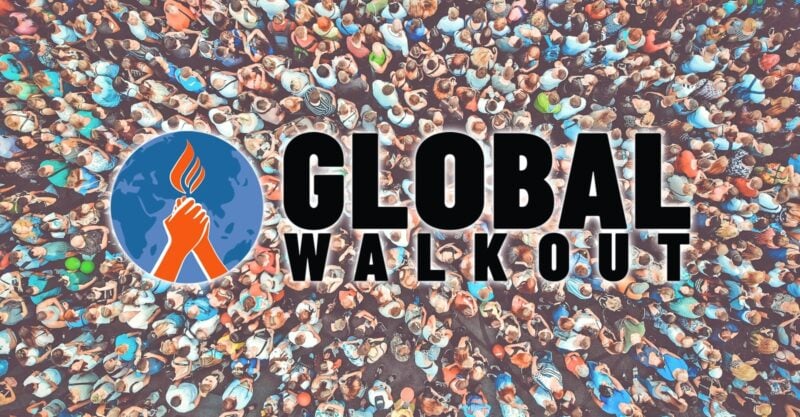 It’s time to take practical steps — individually and collectively — to impede the globalist agenda and empower ourselves to move toward creating the lives we want to live, according to Reignite Freedom.

Every Sunday at 8 p.m. London time (2 p.m. ET), Global Walkout announces a new “step” or action people can take to extricate themselves from the globalist agenda and impede its progress.

“Many of us, myself included, have unconsciously subscribed to globalism by accepting the conveniences they offered us through technology communication and easy banking,” said Monica Smit, manager of the Global Walkout campaign, in the intro video for the Global Walkout.

“If we want to strategically push back against globalism, we must lead by example and slowly unchain ourselves.

“We already have the power. There are already enough of us. We just need to act in unison … One step at a time, we will gradually strive to disconnect from the globalist agenda.”

According to its website, people taking practical steps can build enough momentum to “create roadblocks” in the globalist agenda:

“When millions of people worldwide act in unison, we will become an effective force that cannot be ignored.

“With enough numbers, the global walkout family can start to engage in significant actions that would encourage corporations and governments to take notice and consider our perspective.

“If our actions can directly affect the back pockets of the globalists, they might have no choice but to listen.”

“The Canadian Convoy was the inspiration [for creating the Global Walkout],” Smit told The Defender. “It thought to myself, ‘Imagine if we did this all around the world at the same time.’”

“The most important thing is that anyone can participate no matter where they live, what they do or what their lifestyle is. It takes very little energy but can have a huge impact if done in unison globally.

“You can participate in each step to whatever capacity you feel comfortable with. If you don’t like a step, you don’t have to do it. If you like the next one, do that one.”

In addition to Smit, Kennedy, McCullough and Malone, the Reignite Freedom launch team members are:

The Global Walkout: step by step

Global Walkout, which so far has announced four steps, will announce the fifth on Oct. 2. Here’s how the campaign shapes up so far:

“Smaller banks support local family-run businesses more. If you invest your money in them, you are helping your local economy overall.

“If enough people take their money away from the big banks, they will have less control.

“In some cases, smaller banks are less controlled by big corporations and the government.

“We are unsure what the future holds. We know that the globalists are trying to bring in a digital ID and a cashless society. This step alone will not prevent this, but it’s a start.”

The website included a handout participants can use during conversations with staff at their new and old banks about why they are switching to smaller banks.

Step 3: Ditch mainstream media: Announced Sept. 18, Step 3 urged participants to “unsubscribe from all mainstream media outlets. Delete the apps from your phone, laptop and tablet and unfollow all of their social media and YouTube channels. Try to avoid mainstream media for at least one week, even if the headline is intriguing.”

The Global Walkout website included a handout participants could share with others about “why minimizing mainstream media consumption is a good idea” and offered three suggestions for accomplishing the third step:

Step 2: Buy local: Step 2, announced Sept. 11, asked participants to “locate and support family-run grocery stores and markets as much as possible. Try to purchase locally grown products to support the farming and market communities in your area. If you live in the city, research what fresh produce is grown in your region.”

The Global Walkout provided these tips:

The website also included a handout participants could share with others explaining the importance of supporting local farmers and small businesses.

Step 1: Keep cash alive: Step 1, announced Sept. 4, advised participants to use cash as much as possible.

A printable handout suggested participants use this conversation starter: “I paid cash today for a reason”:

The website also included a handout businesses can use to tell customers why they encourage them to pay with cash: