A new FDA report said Emergent BioSolutions, which received millions in taxpayer funding, mixed up more doses of J&J and AstraZeneca vaccines than previously thought. The report also said the plant was too small, poorly designed and dirty. 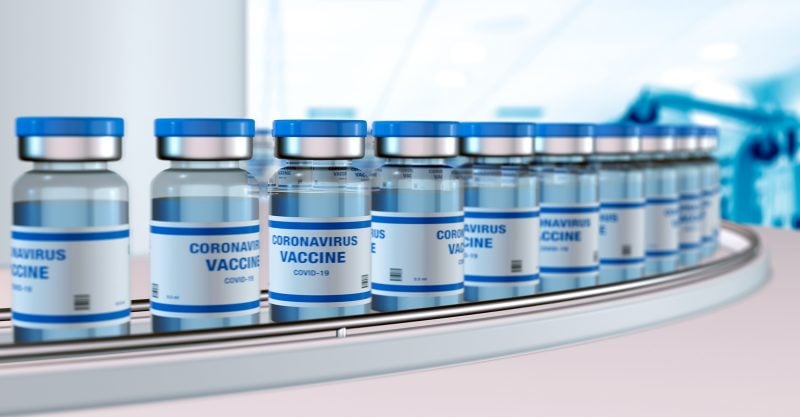 A Johnson & Johnson (J&J) COVID vaccine manufacturing plant where an ingredient mix-up last month resulted in 15 million doses of J&J vaccine being discarded may have contaminated additional doses, according to a report released Wednesday by the U.S. Food and Drug Administration (FDA).

The 13-page report also identified a series of other problems at the Baltimore facility owned by Emergent BioSolutions. Emergent, which in June received $628 million in taxpayer funding through the U.S. Department of Health and Human Services (HHS) to establish the primary U.S. manufacturing facility for J&J’s and AstraZeneca’s COVID vaccines, agreed this week to temporarily shut down operations.

According to the FDA report, “There is no assurance that other batches have not been subject to cross-contamination.” The report also said the plant was “not maintained in a clean and sanitary condition.” Inspectors found peeling paint and unidentified black and brown residue on the floors and walls, as well as a failure to properly decontaminate waste generated during the manufacture of the vaccine.

During an FDA inspection completed Tuesday, the Baltimore plant was found to be too small, poorly designed and dirty. Unsealed bags of medical waste were observed, along with damaged floors and walls that could inhibit proper cleaning, inspectors said.

“I’m shocked — I can’t put it any other way,” said Dr. José R. Romero, chairman of a panel advising the Centers for Disease Control and Prevention that will meet Friday to determine whether to lift the pause on J&J’s vaccine announced last week after reports of blood clots associated with the vaccine. “Inappropriate disinfection, the prevention of contamination — those are significant and serious violations,” Romero said.

In statements Wednesday, the FDA, Emergent and J&J said they were working to resolve the problems at the factory, but gave no indication of how long that would take.

Just two weeks after the government handed J&J control over the “error-prone” Emergent plant, the FDA asked Emergent to suspend production of J&J’s COVID vaccine after inspecting the facility.

At the FDA’s request, the company agreed on April 16 not to make any new COVID materials at the Baltimore facility and to quarantine existing materials already manufactured there “pending completion of the inspection and remediation of any resulting findings,” according to an 8-K U.S. Securities and Exchange Commission (SEC) filing.

According to The Washington Post, J&J said it was working to resolve the situation at Emergent and would address any findings at the conclusion of the inspection. The facility was cited for the same quality control problems in April 2020 that led to the COVID vaccine production errors.

According to CNBC, an FDA inspection of the Baltimore plant in April 2020 revealed Emergent lacked necessary personnel to produce a COVID vaccine. Another inspection, in June 2020, determined Emergent’s plan for producing vaccines was inadequate due to poorly trained staff and quality control problems.

A series of confidential audits last year, obtained by The New York Times, warned about risks of viral and bacterial contamination and a lack of proper sanitation at the Baltimore facility.

A top federal manufacturing expert cautioned last June that Emergent would have to be “monitored closely” — raising questions as to why the company did not fix problems earlier and why federal officials who oversaw its lucrative contracts did not demand better performance.

An examination by The Times of manufacturing practices at the Baltimore facility found serious problems, including a corporate culture that ignored or deflected missteps and a government sponsor, the Biomedical Advanced Research and Development Authority, that was not policing the plant.

It was allegedly human error that botched 15 million doses of J&J’s vaccine in March. But Emergent CEO Robert Kramer disputed published reports that the problem stemmed from employees mixing up ingredients from J&J and AstraZeneca vaccines, which are made at the same plant.

Internal logs showed Emergent also had to discard one batch of AstraZeneca’s vaccine in October 2020 because of suspected contamination, and four more in December. Those four were spoiled by bacterial contamination of equipment, a former company official said.

In November 2020, production of a batch of J&J’s vaccine had to be discarded after workers “hooked up” the wrong gas line and accidentally “suffocated” the cells where the virus for the vaccine is grown, logs show.

In December, records indicated workers making AstraZeneca’s vaccine deviated from manufacturing standards on average more than three times a day. About one-fifth of the deviations were classified as major.

Before Emergent received the $628 million from HHS to establish Baltimore operations, the company received billions from the U.S. government to help prepare the nation for biowarfare, The Washington Post reported.

According to a February report by Accountable.US — a nonprofit nonpartisan public advocate and watchdog organization that monitors public corruption — executives at five drug companies, including Emergent, made net profits of more than $250 million by dumping company stocks during the first six months of Operation Warp Speed.

According to SEC filings, from the beginning of September through November 15, 2020, executives and directors at Pfizer, Moderna, Novavax and Emergent, who received government COVID vaccine funding, made stock transactions valued at a net profit of more than $105 million.

Accountable.US sent a letter to Emergent calling for the release of the 10b5 automatic trading plans used by top executives who made millions of dollars dumping company stock, and requested the CEO freeze sales until the SEC could investigate and release updated guidance regarding automatic trading plans for companies receiving taxpayer funding and advance purchase guarantees — resulting in millions in profits for pharmaceutical CEOs.

A congressional investigation was launched Tuesday into Emergent BioSolutions’ federal vaccine contract and shareholders filed a class action lawsuit Monday, alleging Emergent and some of the Gaithersburg-based company’s made false statements about the company’s readiness to mass-produce vaccines.

The lawsuit alleges “false and misleading” comments by company executives drove up the share price, which substantially dropped when news media outlets exposed a major mistake that forced the company to discard millions of vaccine doses and revealed a history of problems found in inspections.