The U.S. Food and Drug Administration took more than a year to follow up on a potential increase in serious adverse events in elderly people who received Pfizer’s COVID-19 vaccine, according to an investigative report published Tuesday by The BMJ. 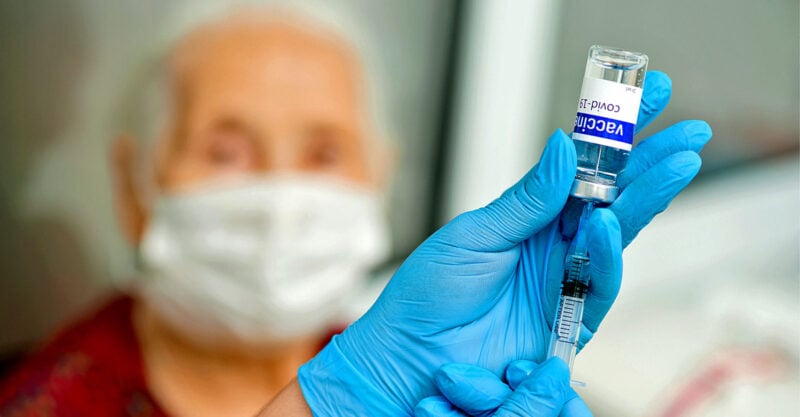 The U.S. Food and Drug Administration (FDA) took more than a year to follow up on a potential increase in serious adverse events in elderly people who received Pfizer’s COVID-19 vaccine, according to an investigative report published Tuesday by The BMJ.

According to The BMJ, in July 2021, the FDA “quietly disclosed” the findings of a potential increase in four types of serious adverse events in elderly people who had received a Pfizer COVID-19 vaccine: acute myocardial infarction, disseminated intravascular coagulation, immune thrombocytopenia, and pulmonary embolism.

The FDA disclosure lacked specific details, such as the magnitude of the increased potential risk, and the agency said it would “share further updates and information with the public as they become available.”

The FDA did not alert physicians or the public, via a press release or any other means, The BMJ investigator said.

Eighteen days later, the FDA published a study planning document that outlined a protocol for a follow-up epidemiological study for investigating the matter more thoroughly.

That was over a year ago. “More than a year later, however, the status and results of the follow-up study are unknown,” The BMJ reported, adding:

“The agency has not published a press release, or notified doctors, or published the findings by preprint or the scientific literature or updated the vaccine’s product label.”

Critics of the FDA’s failure to warn the public voiced their concerns about the data to The BMJ and called on the FDA to notify the public immediately.

“To keep this information from the scientific community and prevent us from analysing it ourselves, is irresponsible,” said Dr. Joseph Fraiman, an emergency medicine physician in New Orleans who recently carried out a reanalysis of serious adverse events in Pfizer and Moderna’s randomized trials. “It presumes that these organisations are perfect and cannot benefit from independent scrutiny.”

“The fact that the FDA found these four safety signals means they should have followed up on the results and I don’t understand why we haven’t had more information since then.

Fraiman concurred. “The protocols say that they’re looking into these data further, but I’d like to know the results now, it’s been long enough. They need to view this from a public health perspective, they need to consider a person’s right to informed consent.”

“As physicians, we recommend medical therapies and we need to explain the full risks and benefits to the patient. This is not happening,” Fraiman added.

Dr. Dick Bijl, an epidemiologist in the Netherlands, pointed out, “The FDA managed to determine the efficacy of the vaccines in a short period of time, but they have not analysed the pharmacovigilance data with the same speed. If they found signals in July 2021, they should have been analysed and published within months.”

Bijl is the president of the International Society of Drug Bulletins and has campaigned for years to get safety data communicated to doctors in a timely fashion. He told The BMJ he credits his organization for prompting the World Health Organization to begin publishing regular updates about drug safety signals in its WHO Pharmaceuticals Newsletter so that all doctors can take note of them.

“The FDA should have informed doctors about any early safety signals from the vaccines.

“Most doctors are not trained to, nor are they focused on, recognising side effects, especially because vaccines are generally regarded as quite safe. It’s important that doctors are told what to look out for.”

Why the delay in acknowledging safety signal study results?

The FDA’s July 2021 findings came from the Centers for Disease Control’s (CDC) “near real-time” surveillance system called Rapid Cycle Analysis (RCA) that the FDA used to monitor a list of 14 adverse events of special interest.

Data obtained from the RCA system is not intended to establish a causal relationship between a vaccine and adverse events but rather is intended to detect potential safety signals rapidly.

The RCA data referenced by the agency in its July 2021 disclosure study appeared to only detect safety signals associated with the Pfizer COVID-19 vaccine.

“The agency said the associations were not identified for the other two COVID-19 vaccines authorised in the U.S. made by Moderna and Janssen (Johnson & Johnson),” The BMJ said.

The July 2021 follow-up study protocol stated there is a “manuscript in preparation” for the original RCA study but to date, nothing has been published for either that original study or the follow-up study.

According to The BMJ, the FDA’s medical record review and statistical analyses have recently been completed, and the overall study results are “currently under internal review.”

The FDA downplayed the findings:

“The findings to date from the fully adjusted epidemiologic study on the primary series vaccinations do not provide strong support for an association between the vaccine and any of the four outcomes described in the posting to the FDA website. Additional analyses, including evaluation of booster doses, are still being conducted. Release of the study findings is expected later this fall.”

Furthermore, according to The BMJ, the FDA made no public announcement when the results from an unspecified study it conducted raised safety concerns — but instead “buried” the findings in the introduction section of an Aug. 31, 2022, research protocol document:

Dr. Christine Stabell Benn, M.D., Ph.D., a vaccinologist and professor in global health at the University of Southern Denmark, told The BMJ of yet another study — this one done by her research group that is currently published in preprint.

“The safety signal seems to be gathering around cardiovascular and cerebral vascular events, things to do with circulation and our larger organs, and these are the same signals that appear to be popping up in the FDA surveillance data as well,” Benn said.

She added, “We don’t want to create a lot of unnecessary anxiety and we can’t say there is now proof that the vaccines cause these events because the data are of poor quality, but we can say there is a danger signal, and the medical profession needs to be alerted to this.”

Earlier this year, the CDC admitted to deliberately withholding critical data on the COVID-19 booster shots and hospital admissions, The BMJ reported.

Kristen Nordlund, CDC spokesperson, in February told the New York Times the agency had been slow to release data to the public on breakthrough infections “because they might be misinterpreted as the vaccines being ineffective.”