The National Institute of Allergy and Infectious Diseases has funded controversial gain-of-function research on bat coronaviruses at the Wuhan Institute of Virology, but the institute’s director, Dr. Anthony Fauci denies such funding occurred. 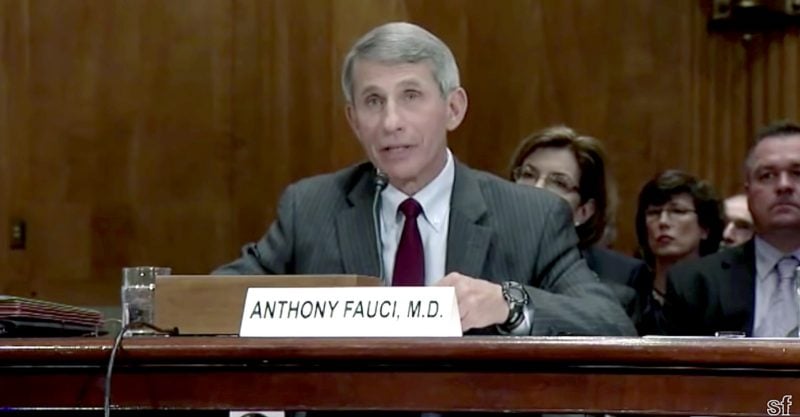 Fauci told a House Appropriations subcommittee that $600,000 was given to the nonprofit EcoHealth Alliance, which funneled the money to WIV, over a five-year period for the purpose of studying bat coronaviruses and whether they could be transmitted to humans.

However, regarding gain-of-function (GOF) research, which refers to studies that have the potential to enhance the ability of pathogens to cause disease, including enhancing either their pathogenicity or transmissibility, Fauci said, “That categorically was not done.”

However, Fauci has long supported controversial GOF research, which you can hear him speak about in the video above, which features a hearing before the Committee on Homeland Security and Governmental Affairs at the U.S. Senate, held April 26, 2012.

Dual use research is inherently risky

Dual use research is so named because it involves research on select agents and toxins that could either benefit society or destroy it, depending on whether or not it falls into the wrong hands. Fauci specifically speaks about dual use research of concern, or DURC, which involves 15 potentially deadly pathogens, including:

Because GOF, or DURC, can be used to make pathogens more readily able to infect humans, it poses major biosecurity risks, which makes publication of such data almost as controversial as the research itself.

Two studies on highly pathogenic H5N1 avian influenza ignited the debate in 2012. One, led by Yoshihiro Kawaoka at the University of Madison‐Wisconsin, identified molecular changes in H5N1 that would allow it to transmit among mammals.

The other, led by Ron Fouchier at Rotterdam University in The Netherlands, genetically modified H5N1 virus, making it airborne transmissible in ferrets. As written in EMBO Reports in 2015:

“Both groups introduced mutations into highly pathogenic H5N1 avian influenza (HPAI) that could potentially increase human-to-human transmission of the virus. These mutations are classified as GOF because they increase airborne transmissibility in ferrets — a good model for human transmission.

“Some in the research and biosecurity communities are concerned that these experiments could result in accidental or intentional releases of the mutated pathogen, or that the now publicly available information about how to increase the human-to-human transmissibility of H5N1 influenza could be abused for developing biological weapons.”

Interestingly, the EMBO report actually was written to protest classifying Fouchier’s work as GOF. However, in January 2012, six months before Fouchier’s article was published, 39 international flu researchers announced a voluntary moratorium on research related to H5N1, which was expected to last 60 days but continued until Jan. 23, 2013, due to the highly controversial nature of the studies.

This prompted the U.S. to develop a DURC policy, which was released in March 2012; Fauci references it in the video above.

Fauci speaks favorably of DURC, despite its potential for grave danger. First, he instills fear in the naturally mutating viruses found in nature, noting, “Indeed, nature itself is the most dangerous bioterrorist, and even as we meet today, H5N1 and other influenza viruses are naturally mutating and changing with the potential of a catastrophic pandemic. This is not a theoretical danger. It is a real danger.”

He later makes it clear that dual use research, including that which explicitly falls under the DURC label, should be allowed to continue:

“If a particular research experiment is identified as DURC, that designation does not necessarily mean that such research should not be published, nor that it should even be prohibited in the first place.

“However, it does call for us, as you mentioned, to balance carefully the benefit of the research to public health, the biosafety and biosecurity conditions under which the research is conducted and the potential risk that the knowledge gained from such research might fall into the hands of those with ill intent.”

Even in light of the controversy, Fauci is steadfast in his support of DURC and GOF research, citing its “clear” benefit to society:

“Importantly, the public attention and concern generated by this issue has triggered a voluntary moratorium or pause on this type of research on the part of the influenza research community as well as a fresh look at how the U.S. government handles DURC as manifested by a formalization of a government wide policy to address the issue.

This policy, which was released on March 29, strengthens and formalizes ongoing efforts in DURC oversight and is described in my written testimony.

The ultimate goal of the NIH in its embrace of this new policy is to ensure that the conduct and communication of research in this area will remain transparent and open at the same time as the risk-benefit ratio of such research clearly tips towards benefiting society.”

Controversy due to ‘public misunderstanding’

During the hearing, Fauci downplayed the public controversy over the two H5N1 DURC studies, calling it a public misunderstanding:

“I might point out that one of the causes of the public misunderstanding was the widespread belief that the virus that was transmitted by aerosol from one ferret to another actually killed the ferrets when, in fact, that was not the case.”

So, by Fauci’s logic, the fact that the virus was genetically modified into a form that made it capable of being transmitted via the air to mammals is inconsequential because it didn’t kill the ferrets during the experiment, and the public uproar that ensued was all a misunderstanding. In lending his further support, he stated:

“We feel that these studies provide critical information and it was important to determine if H5N1 virus that has this enhanced transmissibility would remain sensitive to existing anti-influenza drugs and vaccines. In addition, and importantly, knowledge of the genetic mutations that facilitate transmission may be critical for global surveillance of emerging influenza viruses.”

Another moratorium was placed on U.S.-funded GOF research in October 2014, after a string of concerning events, including publication of controversial GOF studies and high-profile “incidents” at U.S. biocontainment laboratories, led to more than 300 scientists launching a petition calling for an end to gain-of-function research.16 That moratorium was lifted in December 2017.

However, according to Ronnie Cummins, co-founder of the Organic Consumers Association and Alexis Baden-Mayer, the association’s political director (as mentioned earlier in the Mercola link on GOF experiments):

“Exemptions to this ‘pause,’ eventually reviewed by a secret government panel, were nonetheless allowed to go forward. The ban was lifted in 2017. Yet between 2014 and 2016, the NIH and Fauci-led NIAID continued funding gain-of-function research overseas at the Wuhan lab, via [Peter] Daszak’s EcoHealth Alliance.

“Not surprisingly both Fauci and Daszak have been staunch defenders of the official Chinese government story that the virus that causes COVID-19 (SARS-CoV-2) ‘naturally’ evolved from bats and/or other host species to infect humans.”

In a May 11 Senate hearing, Sen. Rand Paul questioned Fauci on the NIAID’s funding of GOF research on bat coronaviruses, some of which was conducted at the WIV. Fauci denied the charge, saying, “The NIH has not ever, and does not now, fund gain-of-function research in the Wuhan Institute.” However, NIH’s funding of such research can be easily double-checked.

In a Truth in Media report, investigative journalist Ben Swann reviews documents proving Fauci lied to Congress, including a paper titled “SARS-Like WIV1-CoV Poised for Human Emergence,” submitted to PNAS in 2015 and subsequently published in 2016. In this paper, the authors state:

“Overall, the results from these studies highlight the utility of a platform that leverages metagenomics findings and reverse genetics to identify prepandemic threats. For SARS-like WIV1-CoV, the data can inform surveillance programs, improve diagnostic reagents, and facilitate effective treatments to mitigate future emergence events.

However, building new and chimeric reagents must be carefully weighed against potential gain-of-function (GoF) concerns.”

At the end of that paper, the authors thank “Dr. Zhengli-Li Shi of the Wuhan Institute of Virology for access to bat CoV sequences and plasmid of WIV1-CoV spike protein.” They also specify that the research was supported by the NIAID under the grant awards U19AI109761 and U19AI107810, which together total $41.7 million.

As noted by Swann, this paper clearly spells out that the NIAID spent $41.7 million on GOF research, with the aim of determining how bat coronaviruses can be made more pathogenic to humans, and that this research continued after the 2014 moratorium on such funding was implemented.

Shortly after the March 2021 Senate hearing, WIV deleted mentions of its collaboration with Fauci’s NIAID, NIH and other U.S. research partners from its website. It also deleted descriptions of GOF research on the SARS virus. This appears to be an attempted cover-up, not only of their own involvement but also American government involvement.

Several members of the U.S. Congress, however, have now vowed to launch their own investigation to explore the lab accident theory. The Energy and Commerce Committee has also requested extensive records from both the NIH and EcoHealth Alliance detailing research and collaborations with WIV. As George Washington famously said, “Truth will ultimately prevail where there are plans taken to bring it to light.”