The Murky Ethics of Paying People to Get the COVID Vaccine

Facing sluggish demand, especially among healthcare workers, for Pfizer’s and Moderna’s experimental COVID vaccines, employers float a variety of incentives that some say border on coercion. 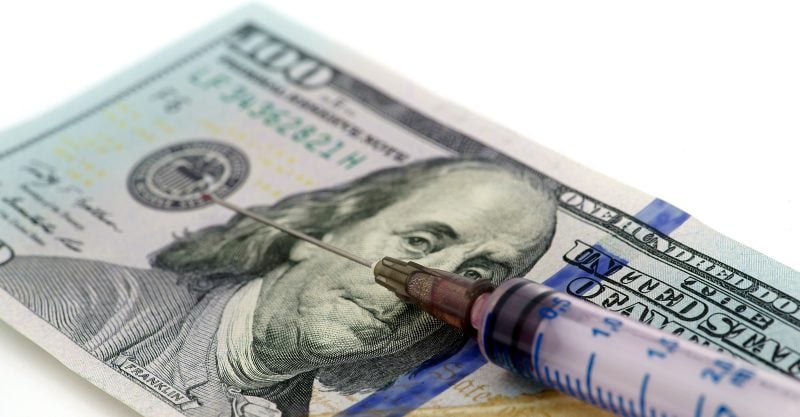 Three weeks into January, following the December decision by the U.S. Food and Drug Administration (FDA) to grant emergency use authorization for Pfizer’s and Moderna’s experimental mRNA vaccines, roughly 14 million Americans have received one or more doses of coronavirus vaccine.

Scott Gottlieb, the former FDA commissioner who passed through the revolving door to join Pfizer’s board of directors in 2019, predicts that demand for the shots will become “soft” after just a third of the U.S. population has accepted the jab.

The fact is, despite the omnipresent messaging in favor of the experimental vaccines, many Americans’ interest in COVID-19 vaccination is tepid at best. This is particularly the case among the healthcare and nursing home workers being asked to take the risk of rolling up their sleeves first. Many are refusing the shots, taking pains to explain that they are not “anti-vaxxers” but object to being “guinea pigs.”

From Los Angeles to Ohio to Maine, up to 60% of vaccine-eligible frontline health workers are declining the as-yet-unlicensed mRNA vaccines. Health systems — “intent on getting doses to as many people as possible, as quickly as possible” — report that in some locations, the vaccine is “‘literally sitting in freezers’ because healthcare workers [do] not want to take it.”

The situation is similar in the nation’s nursing homes, where “workers have been more reluctant than residents to be vaccinated.” According to a group that represents for-profit nursing homes, half of long-term care staff are unwilling to get the COVID shots. And over time, nursing home employees who witness elderly residents dying within hours or days of getting their injections may become even more reluctant to play vaccine roulette.

Discussing the issue of mandates, a Yale executive declared in early December that it is possible to “accomplish [vaccination] without forcing people,” citing as evidence an occasion when he received a piece of cake in exchange for getting a flu shot. Acknowledging that acceptance of experimental COVID-19 vaccines might require “more than a sheet cake,” he nonetheless suggested that “small financial incentives” might be adequate to the task.

Apparently, America’s private sector has reached similar conclusions. A growing number of companies (including, but not limited to, the healthcare sector) are offering “wary staff members” financial and non-financial incentives aimed at shifting employees’ decisional balance in favor of COVID vaccination.

In Nazareth, Pennsylvania, the Gracedale Nursing Home is offering employees who take the jab a one-time payment of $750, “using money received through the federal CARES Act for the pay-out.”

The county officials who approved the payments admit, “there may be some reticence on the part of some staff to be inoculated with the COVID-19 vaccination due in part to the rapidity of its development.”

In Texas, the 26,000-employee Houston Methodist hospital system is offering a $500 “hope bonus” to workers who accept the COVID vaccine. But the hospital expects to “eventually” make the injection mandatory for employees.

Other facilities are offering more modest compensation. For example, a Wisconsin nursing home is providing a $150 bonus for staff who complete both doses, amounting to about eight hours’ pay for most workers. Atlanta’s A.G. Rhodes, a long-term care company, is offering raffle prizes — TV sets, paid time off and paycheck bonuses worth up to $500 — to staff who get vaccinated.

Nursing homes in Maine are exploring strategies “such as bonuses or time off to get vaccinated,” but also view non-monetary tactics such as peer pressure as fruitful.

Eager to jump on the feel-good bandwagon and “promote the importance of vaccination,” the National Football League has offered free Super Bowl tickets and “game day experiences” to 7,500 health care workers — as long as they have received both doses of COVID vaccine.

In commerce, the global grocery chain Aldi plans to give hourly workers two hours of paid time off per dose of vaccine (a total of four hours), “ensuring that all hourly workers who wish to receive the vaccine are able to do so without concern about losing pay or taking time away from work.”

Trader Joe’s, owned by heirs of Aldi’s founders, is making the same offer, as is Dollar General, which will give employees “a one-time payment equivalent to four hours of pay after receiving a completed vaccination.”

Instacart, the online grocery platform, has announced a $25 COVID-19 “vaccine support stipend” for in-store team members and the company’s “shoppers” (individuals who get paid to shop and deliver groceries) “as they take time away from Instacart to get vaccinated.”

Think tanks and ethicists chime in

Discussions about financial incentives for vaccination have also been circulating at high-profile think tanks, and some of the proposals make Instacart’s $25 stipend pale in comparison.

For example, former presidential hopefuls John Delaney and Andrew Yang endorse the idea of paying $1500 to any American who provides proof of vaccination. Meanwhile, Brookings Institution fellow Robert Litan is advocating for a $1,000 (tax-free) payment — although the latter cleverly proposes delaying most (80%) of the payment to vaccinated individuals until the nation achieves its desired level of vaccine coverage (a moving target that front men like Dr. Peter Hotez and Dr. Anthony Fauci have been steadily “inching … upward”).

On Jan. 6, medical experts from Cornell and the University of Pennsylvania aired an opinion piece in the Journal of the American Medical Association (JAMA), criticizing “payment-for-vaccination proposals” as being “morally suspect,” but not for the reasons one might think. The two authors’ principal objection — based on the historical, Nuremberg-Code-denying and ethically dubious assumption that “people have a moral duty to be vaccinated” — is that payment would “rob the act [of being vaccinated] of moral significance.” At most, the two say that they could accept reimbursing the vaccinated for expenses, “analogous to the modest payment offered to citizens summoned for jury duty.”

While not their top objection, the two authors do acknowledge “genuine” ethical concerns “about the influence of such an incentive on decision-making” and the risk that incentives could appear to be “trading on financial insecurity.” They state:

“Offering payment as an incentive for COVID-19 vaccination may be seen as unfairly taking advantage of those U.S. residents who have lost jobs, experienced food and housing insecurity, or slipped into poverty during the pandemic.”

Bioethicist Julian Savulescu of the UK’s Oxford Centre for Practical Ethics has a solution for this concern, described at length in Britain’s Journal of Medical Ethics in November. In his treatise, Savulescu benignly proposes a “payment in kind” model rather than cash, arguing that “greater freedom to travel, opportunity to work or socialise,” and “the freedom to not wear a mask in public places … and not to socially distance” would represent “attractive benefits” for the vaccinated.

As Savulescu sees it, overt vaccine mandates come with hassles, expenses and attacks on liberty that rile the public. In the near term, therefore, and also because the Pfizer and Moderna vaccines are still investigational, most officials promoting COVID-19 vaccination deny the prospect of a government mandate.

Instead, they seem only too happy to let the private sector set the tone for vaccine coercion — with monetary incentives representing the first, less threatening step.

Several developments in December suggest that the situation will get worse. First, right after the FDA granted the Pfizer vaccine its emergency use authorization, a Dec. 15 poll conducted by Yale highlighted “a surprising amount of openness to the idea of mandates for vaccines” among current and recent CEOs of major U.S. companies, including Walmart, Goldman Sachs, eBay, American Airlines, MetLife,and Pizza Hut. Although most were not yet ready to make employment contingent upon COVID vaccination, almost three-fourths (72%) of the CEOs endorsed the idea of mandates sometime “down the road.”

Right on cue, the Equal Employment Opportunity Commission (EEOC) issued, on Dec. 16, pandemic guidance stating that employers “generally can mandate” that employees receive a COVID-19 vaccine if FDA-authorized or approved, subject to protections for employees who seek medical or religious exemptions.

Art Caplan, a pharmaceutical-industry-friendly celebrity bioethicist at New York University once accused by Salon of being as willing to dispense sound bites as “sound moral thinking,” recently bragged about his former role as instigator of “the whole idea of mandating flu vaccination for healthcare workers” upon pain of losing their jobs.

In response to health workers’ pushback against mandatory workplace flu shots, Caplan unsympathetically wrote in 2009, “Enough already with the whining, moaning, demonstrating and protesting by healthcare workers. Doctors, nurses, respiratory therapists, nurses’ aides and anyone else who has regular contact with patients ought to be required to get a flu shot or find another line of work.”

Caplan’s recent comments make it clear that he, and others, are gearing up to make the same case for COVID-19 vaccines. While he concedes the difficulty of mandating “something that’s out on an experimental use authorization,” he states that “once vaccines get licensed, we will see mandates [for healthcare workers and nursing home staff] within the next week.”

Caplan also predicts the adoption of similar measures from other types of employers, who “will be insisting on mandates or telling you to stay home.”

Public health officials appear to have been caught off guard by the extent of COVID-19 vaccine refusal among healthcare workers, and they surely must be concerned that workers’ reported loss of faith “in big pharma and even the CDC [Centers for Disease Control and Prevention]” may make employees impervious to the relatively modest amounts being dangled as financial incentives.

Weighing the risks and benefits (an activity in which all healthcare workers — all people — should be allowed to engage), a pregnant nurse who declined the mRNA injection told the Los Angeles Times that she was “choosing the risk of COVID,” observed over many months of caring for COVID patients, over “the risk of the unknown of the vaccine.”

Dr. Peter Hotez — who initially expressed caution about coronavirus vaccines but now has become one of the injections’ most reliable cheerleaders — has inadvertently identified the real problem: the obsession with vaccines as sole solution. As Hotez recently admitted: “[W]e put all our eggs in the biotechnology basket. We’re now relying exclusively on vaccines to control this.”

An even more significant problem is the doublethink message that is now equating vaccination with “freedom.”