The U.S. Environmental Protection Agency’s deeply flawed regulatory process allows the use of pesticides like aldicarb, an "extremely hazardous" neurotoxin banned in more than 100 countries and known to cause developmental harm in children. 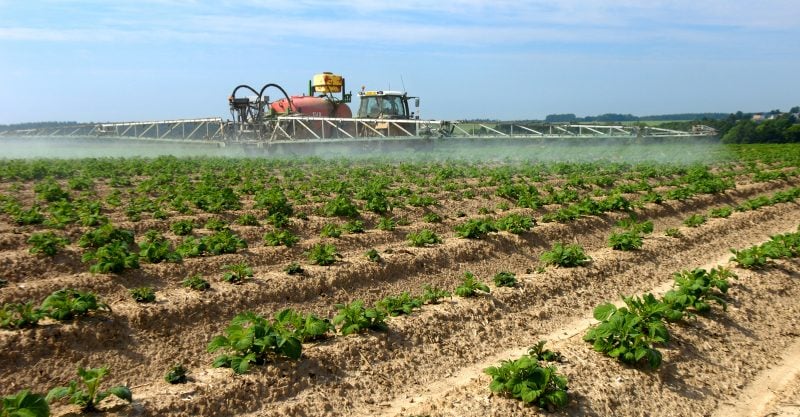 There’s a reason the pesticide aldicarb is banned in more than 100 countries and is one of only 36 pesticides out of thousands designated as “extremely hazardous” by the World Health Organization.

More than a decade ago, the U.S. Environmental Protection Agency (EPA) estimated that the amount of aldicarb young children and infants could be exposed to in the U.S. was already eight times greater than the amount known to cause harm. That means the use of aldicarb had likely been poisoning young children for years

After several years of negotiations, the EPA signed a voluntary agreement in 2010 with Bayer CropScience, then the sole maker of aldicarb, to phase out production and use of the pesticide by 2018. The eight-year time frame of the phaseout left much to be desired, but the uses that posed the greatest risk to young children — on citrus and potatoes — were eliminated immediately. That made aldicarb one of only a handful of pesticides that had been actively targeted for phaseout by the EPA in the last 20 years.

But unfortunately, the troubling story of aldicarb use in the U.S. does not end there. In April 2011, several months after Bayer CropScience agreed to completely phase out production of this pesticide, another pesticide company called AgLogic LLC secured approval from the EPA for the use of aldicarb on a subset of crops like cotton, sugar beets, and sweet potatoes in the U.S. And the EPA is now considering expanding that approval even further.

Earlier this month AgLogic applied for approval of aldicarb on oranges, grapefruit, lemons, and limes in Florida and Texas, altogether accounting for about 400,000 acres of crops.

The EPA has not yet indicated whether it will approve this application. But it’s hard to overstate just how outrageous it is that the agency has not only turned its back on its commitment to phasing out a pesticide with such well-documented health risks but is actually considering expanding its use on the very crops that pose the highest risk to people.

The EPA’s growing reputation across the globe as a pesticide pushover is highlighted by the fact that aldicarb’s makers are actually arguing that one reason it would be “safe” to expand its use in the U.S. is because it cannot be used virtually anywhere else in the world.

The logic goes that since aldicarb is banned in most countries, it won’t be found in imported food. Therefore, people who eat or drink a mix of imported and domestic foods will have their aldicarb exposure “diluted,” so to speak.

The “It’s banned everywhere else, so there’s no harm in allowing its use here” approach is as shocking as it is absurd. But you’d be mistaken to think this type of argument will get the derision it deserves. The EPA has already indicated a willingness to revisit its cancellation of aldicarb based on this very argument.

The EPA’s troubling decision to consider broader uses of aldicarb reflects a well-documented trend in the agency.

For example, the EPA is in the process of approving the use of up to 650,000 pounds of the medically-important antibiotic streptomycin as a pesticide on half a million acres of the same citrus trees that may be treated with aldicarb and several other new and older pesticides. By contrast, only 14,000 pounds of streptomycin’s entire antibiotic class are used for human medicinal purposes each year.

EPA’s reckless decision ignores the fact that streptomycin is not only considered “critically important” for human medicine by the World Health Organization, but is currently used to fight another global pandemic that kills an estimated one million people each year: tuberculosis.

The wanton overuse of human medicines to treat bacterial diseases in plants is why the U.S. Centers for Disease Control and Prevention (CDC) has raised concerns over this impending approval and why the EU, Brazil, and other nations have banned its use on plants entirely.

The overuse of antibiotics like streptomycin, which are essential to treating human disease, can threaten public health because it facilitates the growth of bacteria that have developed resistance to these medicines.

The EPA’s careless approach to both aldicarb and streptomycin are symptoms of a severely broken pesticide regulatory system in the U.S. — one that instead of asking whether it should approve a dangerous pesticide, usually finds a way to greenlight any product proposed by the pesticide industry.

It is, of course, possible that a Biden Administration will step in and prevent the broader approval of aldicarb or streptomycin from ever happening. But it’s also possible that, with dozens of other important environmental issues to address, coupled with a CDC overwhelmed with the pandemic and an American public conditioned to trust the EPA’s judgment, that their approvals will just slide right on through.

That is the path of least resistance and business as usual in the EPA’s pesticide office.

That deeply flawed regulatory process is why the U.S. allows the use of 85 pesticides, at a level of hundreds of millions of pounds each year, that have been banned or are being phased out in the EU, China, or Brazil, according to a peer-reviewed study authored last year.

It’s why, just in the last few years, the EPA approved more than 100 pesticide products containing ingredients widely considered to be the most dangerous still in use, including some that were previously targeted for phaseout in the U.S. This includes two products containing methyl bromide, a potent ozone-depleting chemical that the U.S. committed to phasing out 15 years ago under the Montreal Protocol.

It’s why just last fall the EPA approved several new toxic pesticides and proposed the re-approval of dozens of older toxic pesticides — including atrazine, paraquat, and multiple neonicotinoids, organophosphates, and carbamates that are known to cause serious harm to people, wildlife, and the environment.

And it’s why the U.S. is widely considered by pesticide companies to be a dumping ground for the world’s worst poisons. If the EPA ignores aldicarb’s well-documented harm to humans and the environment and bows to the pesticide-makers’ request to greatly expand its use, it will further cement our well-deserved reputation for putting pesticide company profits ahead of the health of young children and imperiled wildlife.

But before this story becomes a full reality, the Biden EPA should quickly step up and demonstrate its commitment to returning the agency to the critical job its title evokes: environmental protection.

A decision by the agency early in the new year to reject broader uses of aldicarb and streptomycin — and revisit many of the recent deplorable decisions made by EPA’s pesticide program — would send an important message signaling that science, not the heavy-handed influence of agribusiness, will now drive all pesticide decisions moving forward.