Georgia and Tennessee are first states to gain approval to diffuse a chemical known to trigger asthma and other serious respiratory illnesses throughout government buildings, healthcare and food processing facilities and intrastate transportation. 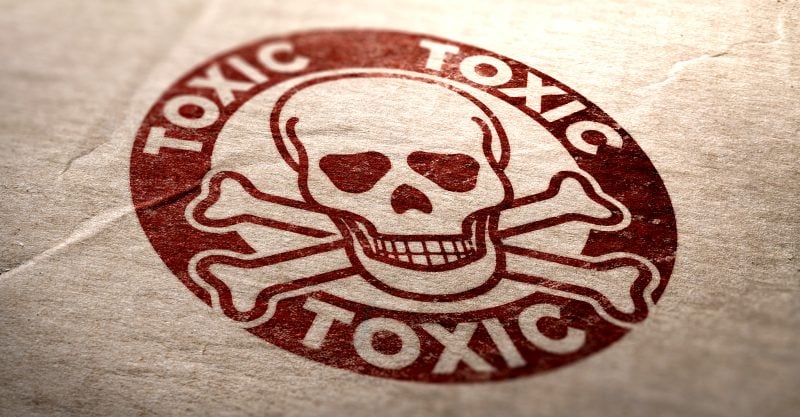 In mid-January, the U.S. Environmental Protection Agency (EPA) approved requests from two southern states (Georgia and Tennessee) asking for an emergency exemption that would allow them to aerosolize selected indoor spaces with an antiviral “air treatment” called Grignard Pure.

Grignard Pure is a nanoparticle-based product. Its active ingredient is a substance called triethylene glycol (TEG).

The EPA’s approval slid in under Section 18 of the Federal Insecticide, Fungicide and Rodenticide Act (FIFRA), which allows the agency to green-light pesticides for unregistered uses in defined geographic areas for up to a year during public health emergencies deemed “urgent” and “non-routine.”

Grignard Pure contains TEG as a standalone chemical compound, but TEG is also a component of some polyethylene glycol (PEG) compounds (those of low molecular weight).

Since last summer, Children’s Health Defense (CHD) has raised urgent questions about the presence of PEG in the nanoparticle-based mRNA vaccines developed by Pfizer and Moderna, authorized by the U.S. Food and Drug Administration (FDA) for emergency use against COVID.

In a Dec. 14 press release and in letters to leaders at the Department of Health and Human Services (HHS), the FDA and the National Institute of Allergy and Infectious Diseases (NIAID), CHD warned about PEG’s known association with adverse immune responses, including life-threatening anaphylaxis.

An estimated 72% of the general population has anti-PEG antibodies (including elevated levels in 8% of Americans) that can set those individuals up for adverse reactions when later exposed to PEG-containing substances.

Pharmaceutical and biotech companies, acutely aware of the correlation between anti-drug antibodies and increased adverse effects, acknowledge that the phenomenon poses a “vexing” and “serious” clinical problem — one that has come into sharp relief as recipients of COVID mRNA injections experience severe allergic reactions.

In light of the interrelationship between PEG and TEG, the planned diffusion of nanoparticle-based TEG in public spaces — including through building heating, ventilation and air conditioning (HVAC) systems — introduces important new questions: Could individuals already sensitized to PEG go into anaphylaxis when they inhale TEG? Or conversely, might people who are exposed to aerosolized TEG then become sensitized to PEG — and run the risk of an adverse reaction when they subsequently encounter a PEG-containing mRNA injection or another “PEGylated” drug?

The newest kid on the block: ‘atmospheric viricides’

The Grignard company describes itself as “an innovative leader in specialty chemical solutions for every industry need,” ranging from precision cleaners and wastewater treatments to “atmospheric effects” for the entertainment industry. In fact, the company’s Grignard FX branch is North America’s “largest producer of theatrical fog and haze fluids” for movies, stadium concerts and theater, as well as being the manufacturer of stage blood promoted as “so realistic they will freak out.”

The company now intends to parlay its extensive theatrical experience into the realm of atmospheric viricides, promising “a light atmospheric haze throughout an indoor space that inactivates enveloped viruses such as the novel coronavirus on non-porous hard surfaces and in the air.”

According to the EPA, the Grignard Pure product has the ability to “permeate and kill. . . over 98 percent of COVID-19 [virus] particles.” Dispersal of Grignard Pure is proposed “via a building’s HVAC system, or using conventional haze/fog machines typically deployed in entertainment venues and in fire training.”

In an example of the revolving regulator-industry door, a four-decade veteran of EPA pesticide regulation is now a leading consultant for Grignard, helping the company market the anti-COVID fluid as the solution to a “critical challenge.”

Meanwhile, outgoing EPA Administrator Andrew Wheeler touted Grignard Pure as a “first-of-its kind” tool to “help fight the spread of the novel coronavirus,” vowing in the agency’s press release that “There is no higher priority for EPA than protecting the health and safety of Americans.”

The EPA endorsed the product’s emergency use in food preparation and eating areas despite warnings in the triethylene glycol safety data sheet not to store TEG “near food, foodstuffs or potable water supplies.”

Did the EPA conduct an objective assessment of benefits versus risks? The agency’s press release does not say, nor does it include any warnings other than a one-sentence statement that “TEG may be an irritant for sensitive populations.” (Canadian fog and smoke safety guidelines for the live performance industry, on the other hand, specify that high-risk individuals — such as children, pregnant women and people with asthma or serious illnesses — should avoid exposure).

But if the EPA is unconcerned about the known short-term effects of exposure to glycol-containing fluids (including symptoms that sound a lot like COVID) or the potential for longer-term harm, the American College of Allergy, Asthma & Immunology (ACAAI) is much more up front about the risks. Addressing glycol-reliant fog machines, the ACAAI states:

“In people with asthma and airways hyper-reactivity, the irritant effect of short-term exposure to water-based fog machines — particularly when the chemical glycol is used — could trigger acute asthma symptoms including cough, wheeze, chest tightness and shortness of breath. Even in a person without asthma, short term exposure to glycol-containing fog machines can be associated with headaches, dizziness, drowsiness, and eye irritation. Prolonged exposure to this substance in a person with asthma could trigger even more severe respiratory difficulty and could cause bronchitic symptoms even in those without asthma. Long term exposure to smoke and fog can result in upper airway and voice symptoms as well, while extended (multi-year) exposure … has been associated with both short-term and long-term respiratory health problems.”

Confusingly, the TEG safety data sheet warns that “repeated excessive aerosol exposures may cause respiratory tract irritation and even death” but reports “no relevant information found” pertaining to respiratory toxicity. This may be because most TEG toxicity studies have focused on oral or dermal exposures, rather than inhalation, and primarily have studied reproductive endpoints or carcinogenicity.

The EPA undoubtedly is aware that inhalation exposures can produce different results than oral or dermal routes of administration. A 2007 study of TEG toxicology — though premised on the now obsolete assumptions that “aerosol exposure is not a usual exposure mode” and that TEG exposure is “mainly occupational” — concluded that “repeated exposures to a TEG aerosol may result in respiratory tract irritation, with cough, shortness of breath and tightness of the chest.”

Another study conducted in 2019 reported that rats exposed to an aerosol combination of TEG and a disinfectant (benzalkonium chloride) for two weeks exhibited severe respiratory symptoms as well as “significant ulceration and degenerative necrosis … in the nasal cavities.”

A mouse study found that mice exposed to “respirable aerosols” of TEG also manifested a number of “nonspecific indications of toxicity,” including irritation, fluid imbalance, liver dysfunction and decreased body weight, along with “unexplained mortality” in female mice two to three days after exposure to the highest concentration of TEG.

What about the nanoparticles?

In September 2020, Brazilian researchers published an extensive discussion of nanotechnology “for COVID-19 virus management.” Although eager to play up nanotechnology’s current and potential anti-COVID applications — including in disinfectants, personal protective equipment, nano-based sensors, “enhanced activity” drugs and nano-based vaccines — the authors also acknowledged some “bottlenecks,” one of the major ones being to ensure nanomaterials’ safe use!

A key observation by the Brazilian authors is that most studies only evaluate nanoparticle biocompatibility in vitro (that is, in a petri dish), rather than in vivo (in actual animals or humans). They state that without high-quality in-vivo studies, it is impossible to fully understand “the toxicokinetic behaviour of the nanoparticles in the body, especially for long-term exposure.”

Elaborating, the Brazilian researchers said: “Due to the multifaceted interactions between nanomaterials and biological systems (in vivo), it is very challenging to foresee the behaviour of these materials under physiological conditions,” particularly given that “[t]he fate and behaviour of nanomaterials in the body can … change when they reach blood circulation”

These interactions — critical to the production of adverse events — are, as yet, poorly understood.

As far as scientists in the burgeoning field of nanotechnology are concerned, the sky’s the limit for nanotech applications. However, these same experts also freely admit that nanoparticles have toxic effects that are “a strong limiting factor” hindering their wider use:

“The small size of NPs [nanoparticles] allows them … to be carried by the bloodstream and lymph stream to different organs and tissues, including the brain, heart, liver, kidneys, spleen, bone marrow, and nervous system … Experiments modeling the toxic effects of NPs on the body have shown that NPs cause thrombosis … , inflammation of the upper and lower respiratory tracts, neurodegenerative disorders, stroke, myocardial infarction, and other disorders. Note that NPs may enter not only organs, tissues, and cells, but also. . . mitochondria and nuclei; this may drastically alter cell metabolism and cause DNA lesions, mutations, and cell death.”

TEG is not a new substance. In the late 1940s and early 1950s, for example, doctors working on infant hospital wards explored the use of triethylene glycol vapors as “a method of disinfecting air in closed and heavily contaminated spaces.”

Reporting on one study’s disappointing results, which deemed TEG ineffective in preventing airborne transmission, the clinicians concluded that glycol vaporization in public buildings was “not yet ready for general use.”

Thanks to 21st-century developments in polymer chemistry and nanotechnology, TEG has now circled back around in the form of Grignard Pure — although the latter likely bears scant resemblance to the TEG vapors used in the 1950s.

Unfortunately for the Georgia and Tennessee residents who are about to be continuously exposed to Grignard Pure (with Nevada possibly being next in line due to heavy lobbying by Las Vegas entrepreneurs), neither Grignard nor the EPA are addressing the thorny safety issues of potential TEG-PEG cross-reactivity, toxic buildup of nanoparticles in the body or synergistic toxicity from TEG-nanoparticle interactions.

It is unclear whether the EPA provided an opportunity for public comment before rushing to approve Grignard Pure. Regardless, concerned citizens may wish to ask the agency some pointed questions about which safety data did — or did not — factor into its decision and how it plans to protect the health and safety of Americans.