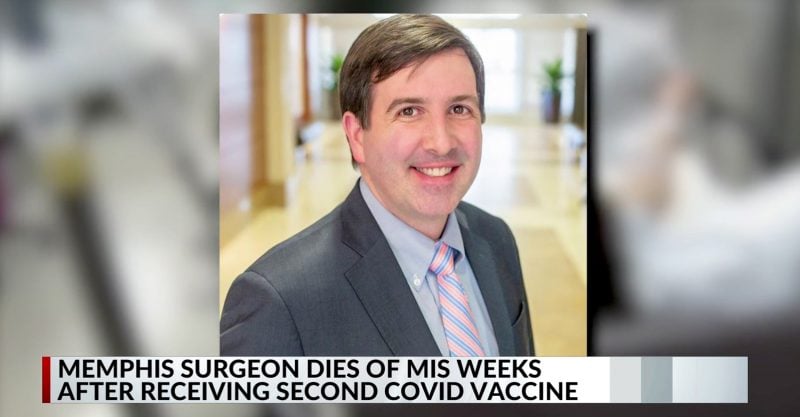 The Centers for Disease Control and Prevention (CDC) is investigating the death of a 36-year-old doctor in Tennessee who died Feb. 8, about a month after receiving the second dose of a COVID vaccination.

The Daily Memphian and other news sources reported that those involved in the investigation believe Williams developed MIS-A in response to an asymptomatic case of COVID-19, not the vaccine.

Dr. Stephen Threlkeld, an infectious disease specialist who treated Williams and is working with the CDC to investigate the death, told a Memphis ABC News affiliate that Williams tested negative for COVID while in the hospital and that Williams had told him that to his knowledge, he had not the virus.

Asked whether the vaccine, rather than an asymptomatic case of COVID, could have caused Williams to develop MIS-A, Threlkeld said: “Everyone who has had [MIS-A], has had the infection. There has been no case published yet of someone who has been documented to have this problem, who has been vaccinated in the past.”

But Lyn Redwood, RN, MSN, president emerita of Children’s Health Defense questioned the preliminary findings that ruled out the vaccine in favor of a rare reaction to an asymptomatic case of COVID.

Redwood pointed to research that described temporal associations between Kawasaki disease (KD), a disease that exhibits symptoms similar to MIS-C such as high fevers, rash and blood vessel inflammation, and a wide variety of vaccines, including hepatitis A and B, rotavirus, influenza, DPT or DTaP, pneumococcal vaccines and yellow fever.

“Scientists who have studied the “distinctive immune system characteristics” of children with Kawasaki disease, a disease which is very similar to MIS-C, acknowledge that the ‘antigenic stimulation’ set in motion by vaccines and other biologics has the capacity to create “immunologic interference,” Redwood said. “Is it possible that the MIS-C and MIS-A are the result of ‘pathogen priming,’ a mechanism that other researchers euphemistically describe as ‘immune enhancement’?”

“Pathogen priming can arise when the proteins in viral vaccines are so similar (‘homologous’) to proteins in humans that they subsequently trigger out-of-control autoimmunity or hypersensitivity reactions such as shock syndrome and delayed anaphylaxis,” Redwood said.

As Redwood reported earlier this week, research has found the SARS-CoV-2 spike protein alone — without the virus — to be a potent inductor of endothelial dysfunction, suggesting that “manifestations of COVID-19 shock syndrome in children can be at least partially attributed to its action.”

In her Feb. 10 article, Redwood referred to a public comment submitted in December to the U.S. Food and Drug Administration from Dr. J. Patrick Whelan, a pediatric rheumatologist, warning about the potential for mRNA vaccines designed to create immunity to the SARS-CoV-2 spike protein to instead cause injuries.

Both the Pfizer and Moderna vaccines, the only two so far approved for emergency use in the U.S., use mRNA technology.

Whelan’s training (at Harvard, Texas Children’s Hospital and Baylor College of Medicine) includes degrees in biochemistry, medicine and rheumatology. For 20 years, he worked as a pediatric rheumatologist. He currently specializes in treating children with multisystem inflammatory syndrome (MIS-C), which has been associated with coronavirus infections.

In his comments to the FDA, Whelan wrote:

“I am concerned about the possibility that the new vaccines aimed at creating immunity against the SARS-CoV-2 spike protein have the potential to cause microvascular injury to the brain, heart, liver and kidneys in a way that does not currently appear to be assessed in safety trials of these potential drugs.”

Whelan was referring to the fact that mRNA vaccines work by incorporating the genetic blueprint for the key spike protein on the virus surface into a formula that — when injected into humans — instructs our own cells to make the spike protein.

In theory, the body then will make antibodies against the spike protein to protect against SARS-CoV-2 infection.

“The problem with this scenario,” said Redwood, “is that the spike protein alone — which the mRNA vaccines instruct the body to make — has been implicated as a key cause of injury and death in COVID-19 infections.”

Based on the research conducted to date, Redwood said, it is very likely that some recipients of the spike protein mRNA vaccines will experience the same symptoms and injuries associated with the virus.

Again according to Whelan, “the potential to cause microvascular injury (inflammation and small blood clots called microthrombi) to the brain, heart, liver and kidney … were not assessed in the safety trials.”

Two studies — one conducted in Singapore and one in the U.S. — have highlighted an association between the 13-valent pneumococcal conjugate vaccine (PCV13) and Kawasaki disease: