More COVID Cases in Kids Who Got 2 Shots Compared to Those Who Got None, CDC Reports

The U.S. Food and Drug Administration authorized the use of a COVID-19 booster shot in children ages 5 to 11, even though data from the Centers for Disease Control and Prevention show case rates among kids in this age group who got two shots are now higher than rates in children who did not get the shots. 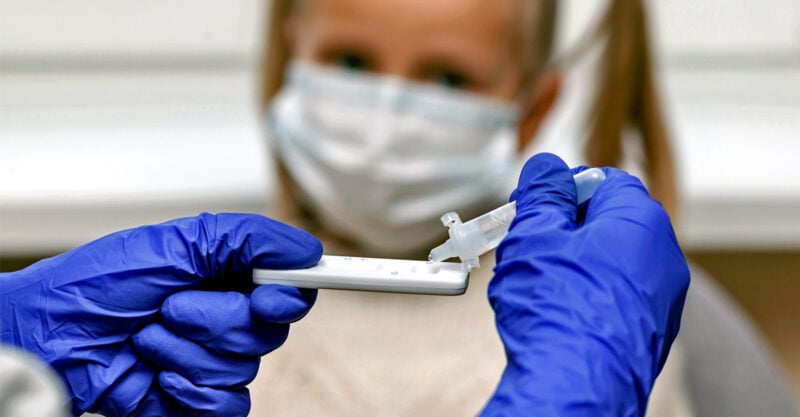 The U.S. Food and Drug Administration (FDA) amended its emergency use authorization for the Pfizer-BioNTech COVID-19 shot to allow a booster dose for children ages 5 to 11.

The FDA’s “evaluation of safety” for the booster dose in young children was based on a study of only about 400 children, and no meeting was held with the Vaccines and Related Biological Products Advisory Committee.

The booster shot is intended to be given at least five months after the primary two-dose series has been completed, but less than one-third — only 28.8% — of U.S. children in this age group have received the first two doses of this experimental gene therapy.

“[G]iven that these children have the lowest coronavirus vaccination rate of all eligible Americans, [as most parents have wisely avoided giving their child the jab] public health experts are not expecting a rush for the booster,” The New York Times reported, and this is good news since multiple red flags have arisen regarding the use of these shots, particularly among children.

Booster shots are typically released because the initial shots aren’t working as planned.

This is certainly the case with COVID-19 shots, which have been found to have dismally low effectiveness rates of 12%, according to research conducted by the New York State Department of Health.

In their rationale for why a booster dose is now needed for children, Dr. Peter Marks, Ph.D., director of the FDA’s Center for Biologics Evaluation and Research, said:

“Since authorizing the vaccine for children down to 5 years of age in October 2021, emerging data suggest that vaccine effectiveness against COVID-19 wanes after the second dose of the vaccine in all authorized populations.”

Protection against hospitalization also dropped, from 100% to 48%. Among 11-year-olds alone, vaccine effectiveness plunged to 11%.

A CDC study also found that the effectiveness of two doses of Pfizer’s COVID-19 shots against symptomatic COVID-19 infection “was modest and decreased rapidly” from December 2021 to February 2022.

A similar trend was seen among adolescents aged 12 to 15 years. Vaccine effectiveness two to four weeks after the second dose of the shots was 59.5%, and this fell to 16.6% during month two.

Among adolescents who received a booster dose, effectiveness went back up to 71.1% two to 6.5 weeks later, but it’s not revealed what happened after that.

If data from adults are any indication, the boost in effectiveness from the booster will also be short-lived.

Among adults, within four to five months post-booster, protection against the emergency department and urgent care visits due to COVID-19 decreased to 66%, then fell to just 31% after five months or more post-booster.

The FDA’s decision to allow a booster dose for children was based on an ongoing Pfizer trial — the same one that it used to authorize the first set of COVID-19 shots in the 5- to 11-year-old age group.

Antibody responses were evaluated in only 67 subjects who received a booster shot seven to nine months after the two-dose primary series of shots. “The antibody level against the SARS-CoV-2 virus one month after the booster dose was increased compared to before the booster dose,” the FDA noted.

However, there is still no data on whether the booster is effective against COVID-19, and whether the effectiveness will quickly wane, as it has with all previous shots.

“Laboratory tests of blood samples from a tiny subgroup of 30 children also showed 36 times the level of neutralizing antibodies against the Omicron variant compared with levels after only two doses. The study did not show how long the antibodies last or test effectiveness against Covid-19.”

What’s more, the notion that increasing antibodies equates to disease protection and better health is misguided.

Artificially inflated antibodies signal to your body that you’re always infected, and the resulting immune response could prove to be detrimental to your health.

Your adaptive immune system, specifically, generates antibodies that are used to fight pathogens that your body has previously encountered.

During normal infections, your cellular immune system produces high fever and temporary T-cell elevations, along with elevated antibodies to the infection, gradually dissipate.

Ali Ellebedy, Ph.D., an associate professor of pathology & immunology at Washington University School of Medicine in St. Louis, explained, “It’s normal for antibody levels to go down after acute infection, but they don’t go down to zero; they plateau.”

This is a normal response and isn’t a measure of waning immunity.

On the contrary, repeatedly, artificially inflating antibodies with booster shots comes with a cost and can lead to a “death zone,” accelerating the development of autoimmune conditions such as Parkinson’s, Kawasaki disease and multiple sclerosis, according to tech leader and COVID analyst Marc Girardot, who urges a retreat from the vaccination “death zone” before it’s too late.

It’s known, for instance, that certain autoimmune diseases are seen alongside high levels of antibodies.

Further, COVID-19 shots train your body to produce singular antibodies for one spike protein and cannot compare to the protection provided by natural immunity, which occurs after recovery from an illness.

“A natural infection induces hundreds upon hundreds of antibodies against all proteins of the virus, including the envelope, the membrane, the nucleocapsid, and the spike.

“Dozens upon dozens of these antibodies neutralize the virus when encountered again. Additionally, because of the immune system’s exposure to these numerous proteins (epitomes), our T cells mount a robust memory, as well.

“Our T cells are the ‘marines’ of the immune system and the first line of defense against pathogens. T cell memory to those infected with SARSCOV1 is at 17 years and running still.”

“When it comes to COVID, public health officials have consistently downplayed and ignored natural immunity among children. Yet 81 research studies confirm that natural immunity to COVID is equal or superior to any ‘vaccine immunity.’”

A concerning number of case reports describe the development of immune-mediated and autoimmune hepatitis in the days and weeks following COVID-19 injections.

A team of researchers collected data from such cases from 18 countries, identifying 87 patients with a median age of 48 years who developed autoimmune hepatitis-like liver injury after a COVID-19 shot.

Typically, the liver injury was diagnosed 15 days after the shot. Most cases (59%) were attributed to Pfizer’s COVID-19 shot while 23% were linked to the Oxford-AstraZeneca shot and 18% to Moderna’s shot.

All of the patients in the study recovered from liver injury after treatment — except for one. That man developed liver failure and had to have a liver transplant.

“SARS-CoV-2 vaccination can be associated with liver injury. Corticosteroid therapy may be beneficial in those with immune-mediated features or severe hepatitis. Outcome was generally favorable, but vaccine-associated liver injury led to fulminant liver failure in one patient.”

Young children are also developing severe hepatitis at an unusually high rate and nobody knows why.

It’s unclear how many of the children have received COVID-19 shots, but researchers did suggest that mild or asymptomatic COVID-19 infection could have left behind spike protein that’s acting as a “superantigen” and triggering the immune system to over-react to other viruses, such as adenovirus-41F, which is causing liver damage.

If that’s the case, the spike protein that circulates in the body after COVID-19 shots could also be problematic, especially since “mRNA vaccines promote the sustained synthesis of the SARS-CoV-2 spike protein.”

Other concerning adverse events have also been reported.

One study published in Scientific Reports, for instance, revealed that calls to Israel’s National Emergency Medical Services (EMS) for cardiac arrest and acute coronary syndrome increased more than 25% among 16- to 39-year-olds from January to May 2021, compared to the same time period in 2019 and 2020.

Children are at extremely low risk of serious illness from COVID-19, making the recommendations for COVID-19 shots, and now boosters, among this population highly questionable — even ludicrous.

“Research shows that there is no benefit to children receiving a COVID shot, and in fact, the shots can cause potential harm, adverse effects and death. According to Pfizer’s own study trial data, the chance of death in children from the shot is 107 times higher than death from COVID,” Malone stated.

The CDC’s own data also show that COVID-19 case rates among children who have received two COVID-19 shots have been higher than rates in children who did not get the shots since February.

“That’s the first time CDC recorded a higher case rate among fully vaccinated young children since data was first collected in December 2021,” Malone said, and perhaps it’s a harbinger of things to come.

Adding a booster dose to the already dangerous, ineffective and flawed COVID-19 shot recommendations for children will only add more fuel to the fire.