Farm Action, a farmer-led advocacy group, on Thursday asked the Federal Trade Commission to "promptly open an investigation into the egg industry, prosecute any violations of the antitrust laws it finds within, and ultimately, get the American people their money back." 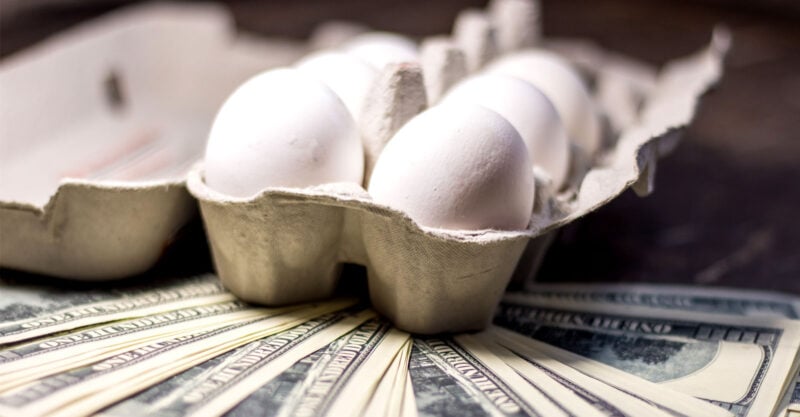 As U.S. egg producers rake in record profits amid soaring prices, a farmer-led advocacy group focused on building a just and sustainable food system on Thursday implored the Federal Trade Commission to “promptly open an investigation into the egg industry, prosecute any violations of the antitrust laws it finds within, and ultimately, get the American people their money back.”

Just before testifying at an open meeting of the Federal Trade Commission (FTC), Farm Action sent a letter to agency chair Lina Khan detailing its “concerns over apparent price gouging, price coordination, and other unfair or deceptive acts or practices by dominant producers of eggs such as Cal-Maine Foods, Rose Acre Farms, Versova Holdings, and Hillandale Farms, among others.”

Major egg producers and their allies have blamed surging prices on a “supply disruption” triggered by the deadliest outbreak of avian influenza in U.S. history, calling it “‘act of God’ type stuff,” the letter notes.

Based on its analysis of publicly available industry data, however, Farm Action determined that while the avian flu outbreak killed roughly 43 million egg-laying hens nationwide in 2022, “its actual impact on the egg supply was minimal.”

According to the letter:

“Moreover, the effect of the loss of egg-laying hens on production was itself blunted by “record-high” lay rates observed among remaining hens throughout the year.

“With total flock size substantially unaffected by the avian flu and lay rates between 1-4% higher than the average rate observed between 2017 and 2021, the industry’s quarterly egg production experienced no substantial decline in 2022 compared to 2021.”

Nevertheless, the “weekly wholesale price for shell eggs climbed from 173.5 cents per dozen at the end of February to 194.2 cents in the middle of March,” the letter continues.

“By the first week of April, it had reached 298 cents per dozen. For two months after this point, the wholesale price of eggs appeared to stabilize at elevated levels slightly below this peak — but then it started increasing again.

According to Farm Action, major egg producers’ massive price hikes are unjustifiable. In addition to the avian flu outbreak, some have attributed skyrocketing egg prices to higher feed and fuel costs, but “the dominant producers’ course-of-business documents suggest these claims have little merit,” the letter states.

“For example, in a presentation to investors just this month, Cal-Maine noted that total farm production and feed costs in 2022 were only 22% higher than they were in 2021.”

“The real culprit behind this 138% hike in the price of a carton of eggs,” says the letter, “appears to be a collusive scheme among industry leaders to turn inflationary conditions and an avian flu outbreak into an opportunity to extract egregious profits reaching as high as 40%.”

Max Bowman, the chief financial officer of Cal-Maine — the nation’s largest producer and distributor of eggs — has admitted as much, saying in a recent statement that “significantly higher selling prices, our enduring focus on cost control, and our ability to adapt to inflationary market pressures led to improved profitability overall.”

CNN reported last week that “there have been no positive tests” of avian flu at any of Cal-Maine’s facilities, and yet the company’s net average selling price per dozen conventional eggs more than doubled last year.

“Contrary to industry narratives, the increase in the price of eggs has not been an ‘act of God’ — it has been simple profiteering,” Farm Action’s letter argues.

“Cal-Maine’s willingness to increase its prices — and profit margins — to such unprecedented levels suggests foul play. That Cal-Maine — the leader in a mostly commoditized industry with, presumably, the most efficient operations and the greatest financial power — will quintuple its profit margin in one year without any compelling business reason is plainly an indication of market power,” the letter continues.

“It is also an invitation for rival egg producers to tacitly collude with Cal-Maine, forego price competition themselves, and maintain high prices for the entire industry.

“Fundamentally, Cal-Maine seems to be engaging in price leadership — using the avian flu outbreak and the inflationary conditions of the past year as cover to establish a new ‘focal point’ for egg prices.”

“This pattern of behavior by the dominant firms in the egg industry raises significant concerns about monopoly power and potential antitrust violations in this sector,” the letter adds.

“It also presents exactly the kind of monopoly or oligopoly power that is entrenched in a market ‘with highly inelastic demand’ and that ‘imposes substantial costs on the public,’ which Chair Khan has previously argued enforcers should seek to challenge.

“We urge the FTC to exercise the full scope of its authorities — under the Sherman, Clayton, and FTC Acts — to identify, challenge, and uproot anti-competitive arrangements that suppress competition among egg producers and enable dominant firms like Cal-Maine to extort consumers for the eggs they need every day.”

In November, “antitrust trailblazer” Khan led the agency in issuing a new policy statement restoring its commitment to “rigorously enforcing” the FTC Act’s prohibition on “unfair methods of competition,” including what critics have called “predatory pricing.”

According to Farm Action:

“What Cal-Maine Foods and the other large egg producers did last year — and seem to be intent on doing again this year — is extort billions of dollars from the pockets of ordinary Americans through what amounts to a tax on a staple we all need: eggs.

“This kind of organized theft is exactly what Congress — and the public it represents — ’empowered and directed’ the FTC to prevent,” the group concluded. “The FTC should do nothing less.”

Corporate greed is the producer of Egg-Land’s Best, Farmhouse Eggs & Land O’Lake Eggs, increasing its profits by 65% last quarter to a record-breaking $198 million while doubling the price of eggs & reporting no positive cases of avian flu. Yes. We need a windfall profits tax.

Last March, Sanders introduced the Ending Corporate Greed Act, which seeks to stamp out price gouging by imposing a 95% tax on the windfall profits of major companies.

Progressive economists have long urged Congress and the Biden administration to enact a windfall profits tax, strengthen antitrust enforcement and impose temporary price controls, arguing that only these measures — and not the Federal Reserve’s unemployment-inducing interest rate hikes — can address the corporate profiteering underlying the cost-of-living crisis.