More than 200 civil society groups sent a letter to members of the U.S. Senate on Monday urging them not to sponsor potential industry-backed bills that critics say rebrand polluting technologies as "advanced recycling" in a bid to keep burning plastic waste. 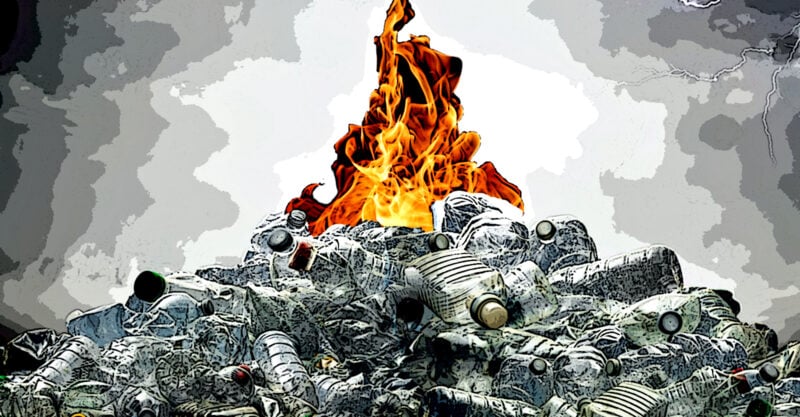 More than 200 civil society groups sent a letter to members of the U.S. Senate on Monday urging them to eschew sponsorship of potential industry-backed bills that critics say rebrand polluting technologies as “advanced recycling” in a bid to keep burning plastic waste.

The letter — which was signed by environmental, science and consumer advocacy groups — implored senators to reject so-called advanced recycling legislation being promoted by the American Chemistry Council, an industry group seeking to “change existing law so that plastics incinerators can operate without meeting the environmental and health protections of the Clean Air Act.”

“Under the guise of offering a solution to the global plastic waste crisis, the American Chemistry Council has invented an Orwellian new name for decades-old incineration technologies,” the signers stated.

“It seeks to rebrand pyrolysis and gasification incinerators as ‘advanced recycling,’ even though there is nothing advanced about them and nothing gets recycled.”

At least 18 states in recent years have passed legislation promoting the technology, which uses chemicals to “recycle” plastic waste.

Opponents, however, argue that what’s needed is legislation like U.S. Sen. Jeff Merkley’s (D-Ore.) Break Free From Plastic Pollution Act of 2021, which would amend the Solid Waste Disposal Act to reduce plastic use and environmental contamination.

A coalition of more than 200 organizations, including dozens of #breakfreefromplastic members, are urging Congress to reject any industry-sponsored federal bill that would deregulate pyrolysis and gasification incinerators as so-called “advanced recycling” facilities … a 🧵(1/)

Less than 10% of U.S. plastic waste is recycled annually. Meanwhile, microplastics, so-called “forever chemicals,” and other plastic pollutants permeate the planet, the atmosphere, and even human bodies.

“In reality, the plastic trash that enters pyrolysis and gasification incinerators gets burned, creating dioxins and other harmful air pollution. What’s left is toxic chemical waste that gets burned again later at hazardous waste disposal facilities or as a dirty fuel.

“Far from ‘recycling’ the plastic waste they get paid to accept, gasification and pyrolysis incinerators are turning plastic into highly toxic air pollutants and generating hundreds of thousands of pounds of hazardous waste.

“Removing existing Clean Air Act limitations on burning plastic will allow chemical manufacturers to produce and release these toxic chemicals into our communities without limitation.

“For chemical industry lobbyists,” however, “the concept of ‘advanced recycling’ is a dream come true,” the letter said. “Having an eco-sounding way to make plastic waste vanish from sight helps the industry justify exponential growth in plastics production, which is expected to triple over the next 40 years.”

The oil and gas industry uses false rhetoric like “advanced” or “chemical recycling” to perpetuate the myth of plastic’s recyclability.

“This is the continuation of an industry strategy of saying recycling can solve the problem and we don’t need to reduce production,” he told Politico, which noted that the fossil fuel industry plans to spend around $400 billion on new plastic manufacturing capacity.

“Changing the legal definition of incineration or waste so that chemical companies can burn plastic in poor and minority communities without controlling the toxic pollution they emit is environmental injustice at its worst,” they argued.

“It would be unconscionable for any member of Congress to endorse and enable the chemical manufacturers’ plans to evade federal health protections for incinerating plastic,” the groups added, “particularly in the face of a global plastic pollution crisis and the projected tripling of plastic waste.”