In a groundbreaking ruling, the New York State Supreme Court last week struck down the state’s COVID-19 vaccine mandate for healthcare workers, holding that the state’s health department lacked the authority to impose the mandate. 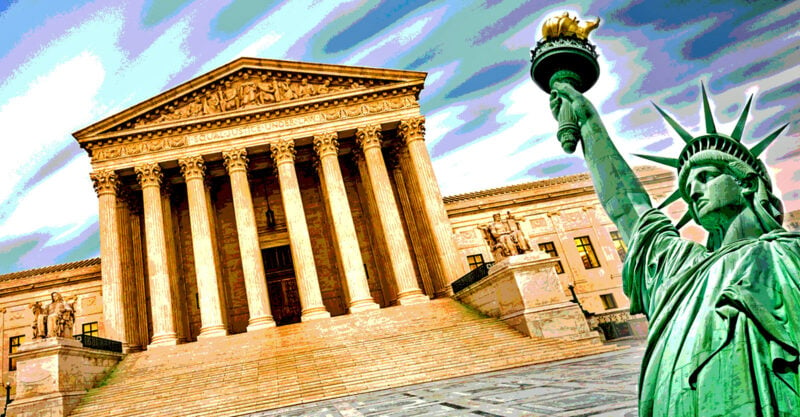 In a groundbreaking ruling, the New York State Supreme Court on Jan. 13 struck down the state’s COVID-19 vaccine mandate for healthcare workers, declaring it “null, void, and of no effect” and holding that the New York State Department of Health (NYSDOH) lacked the authority to impose the mandate.

Moreover, the court ruled that the state’s mandate was “arbitrary and capricious” on the basis that COVID-19 vaccines do not stop transmission of the virus, thereby eliminating any rational basis for such a policy.

The lawsuit challenging the mandate was filed Oct. 20, 2022, by Medical Professionals for Informed Consent — a group of medical practitioners impacted by the mandate — and additional plaintiffs who were specifically named, including two doctors, a nurse, a radiologic technologist and a medical laboratory specialist.

The lawsuit alleged the plaintiffs had lost — or were at imminent risk of losing — their jobs, and that several of them had religious objections to receiving the vaccine, but the mandate did not recognize those exemptions.

Children’s Health Defense (CHD) financed the lawsuit on behalf of the plaintiffs. In a press release issued after the ruling, lead attorney Sujata Gibson stated:

“This is a huge win for New York healthcare workers, who have been deprived of their livelihoods for more than a year.

“This is also a huge win for all New Yorkers, who are facing dangerous and unprecedented healthcare worker shortages throughout New York State.”

“We are thrilled by this critical win against a COVID vaccine mandate, correctly finding that any such mandate at this stage, given current knowledge, is arbitrary.

“We hope that this decision will continue the trend towards lifting these dangerous and unwarranted vaccine mandates throughout the country.”

“I think there was never a time when an experimental, under the Nuremberg Code and under state and federal law, mandate should have been permissible.

“And so, I’m really glad that Judge Neri really socked it to the NYSDOH and said not only do they not have the competence, but what they’re talking about is just Orwellian, it’s completely arbitrary and capricious.”

Gibson noted that while the decision represents a significant victory against the vaccine mandates, it does not, on its own, restore the positions of healthcare workers who lost their jobs as a result of the mandate — but they can now reapply for those positions.

“Individuals will have to reapply to their old jobs or new jobs at other facilities,” said Gibson. “What this decision does do, however, is take away the barrier of the state’s COVID-19 vaccine mandate.”

“The damage done to New York’s healthcare workers and to all New York residents is irreparable. Thousands of people lost their jobs. Countless had to cash out their retirement accounts to feed their families, many lost their homes. Far too many left the state. Meanwhile, thousands of patients were deprived of critical care due to the staffing shortages this mandate caused.

“This lawsuit doesn’t fix those serious harms, but it does allow healthcare workers to go back to work without compromising their religious beliefs, and it does mean that we have protection from similar unauthorized administrative overreach next time.”

Moreover, the ruling may impact other similar cases nationwide, according to Gibson:

“The judge struck down the mandate for two reasons. The first basis, that the NYSDOH lacks authority to issue any vaccine mandates under the state constitution and state public health law, is precedential mostly in New York State.

“The second basis, however, is applicable nationwide. That is, that it is irrational, arbitrary and capricious to mandate a vaccine that cannot stop people from getting infected and spreading COVID-19.”

In an interview today on “Good Morning CHD,” Gibson said the ruling shows that the “tide is turning.” She reiterated that there is “no credible basis to say that mandates are legally justified. No credible basis to argue that they can meaningfully stop the spread of COVID … if they can’t stop the spread of COVID, then it’s just arbitrary and irrational.”

Gibson also told The Defender the state said it is “exploring its options” following the ruling. She said she can’t predict what the state will do, but it would be a poor decision to file an appeal:

“It would be highly irresponsible to try to drag this out. We are in the middle of an unprecedented staffing crisis in New York’s healthcare facilities.

“Meanwhile, we have thousands of doctors, nurses and other experienced and dedicated healthcare workers ready and willing to come back to work without this senseless mandate.”

Holland agreed. “They really don’t have good grounds,” she said, as four sections of state law hold that only the legislature can enact vaccine mandates. With “a big freshman class of legislators,” state lawmakers “would be asking for trouble” if they attempted to introduce such mandates.

Holland noted that the ruling came just as a three-day strike by thousands of nurses at two New York City hospitals ended Jan. 12. One of their demands was more staffing.

Gov. Hochul greeted nurses returning to work before dawn that morning. It would be difficult for her to justify an appeal after she supported the striking nurses, Holland said.

The plaintiffs argued, “There is no rational basis for the Mandate when Respondent DOH acknowledges the mandated vaccine fails to accomplish its stated goal, i.e., prevent the spread of COVID-19.”

The lawsuit also pointed out that the governor’s emergency powers were rescinded on June 24, 2021, but the state’s health commissioner, on June 22, 2022, nevertheless made the mandate a permanent regulation, in violation of sections 206, 613, 2164 and 2165 of New York’s Public Health Law.

Section 206 states that the state’s health commissioner may:

“(l) establish and operate such adult and child immunization programs are as necessary to prevent or minimize the spread of disease and to protect the public health. …

“Nothing in this paragraph shall authorize mandatory immunization of adults or children [except in limited circumstances outlined in sections 2164 and 2165].”

The plaintiffs argued that by enacting the mandate, the NYSDOH violated the separation of power doctrine, by usurping the authority of the New York State Assembly.

Moreover, by accommodating only medical exemptions but not religious exemptions, the mandate violated the state’s Human Rights Law, the lawsuit claimed.

“Because of the Mandate, thousands of healthcare professionals, including Petitioners, are unable to work in their field anywhere in New York State.

“The decision to take thousands of frontline workers out of the field at a time when there was already a labor shortage in the healthcare field has caused tremendous public outcry, even among very pro-vaccine leaders in the healthcare industry.”

According to the lawsuit, Gov. Hochul recognized the mandate was exacerbating the healthcare worker shortage:

“Governor Hochul admitted that her Mandate was causing a crisis, preemptively declaring a ‘state of emergency’ (and with that invoking emergency powers) the night before it took effect due to the healthcare worker shortage that she and the other Respondents caused.

“Despite calling in the National Guard, the crisis has only deepened since last year, and the Governor has continuously renewed these ‘state of emergency’ declarations on the grounds that the state faces a staffing crisis in healthcare.”

The lawsuit referenced news articles from as early as September 2021, wherein even pro-vaccine healthcare executives went on record questioning the mandate in light of the ongoing healthcare worker shortage.

Tom Quatroche, president of the Erie County Medical Center, on Sept. 24, 2021, told The New York Times the mandate had caused an “unprecedented crisis” and that even though “for all the right reasons, the vaccine mandate was put in place … the reality is it is creating a public health crisis in hospitals, with nobody to care for our patients.”

The lawsuit cited the state’s Syracuse region, where the healthcare worker shortage resulted in a 20% decline in available hospital beds, leading in some cases to patients being sent to hospitals hundreds of miles away.

In the midst of the mandate, a similar percentage (17%) of doctor and registered nurse positions throughout upstate New York were vacant, according to September 2022 statistics from the Iroquois Healthcare Association.

One Sept. 10, 2021, news story referenced in the lawsuit reported that some hospitals stopped delivering babies as maternity workers resigned due to the vaccine mandate.

In letters sent to Gov. Hochul and other state officials in late 2021 and early 2022, state lawmakers raised concerns about the usurpation of the State Assembly’s authority and the contribution of the vaccine mandate to the healthcare worker shortage.

The court generally agreed with the plaintiffs’ arguments, finding the defendants “acted outside of their legislative grant of authority” and “are clearly prohibited from mandating any vaccination outside of those specifically authorized by the Legislature.”

As a result, wrote the court, “The Mandate … is beyond the scope of Respondents’ authority and is therefore null, void, and of no effect, and Respondents, their agents, officers, and employees are prohibited from implementing or enforcing the Mandate.”

Significantly, the court noted the mandate did not draw upon “special expertise in the field,” finding that “it is clear such expertise was not utilized as the COVID-19 shots do not prevent transmission,” while the term “fully vaccinated” within the mandate, was “defined at the whim” of the state and was therefore “arbitrary and capricious.”