Multiple studies link flu vaccination to increased risk of COVID. One analysis found that European countries with the highest COVID-19 death rates had high rates of flu vaccination — at least 50% — among the elderly. 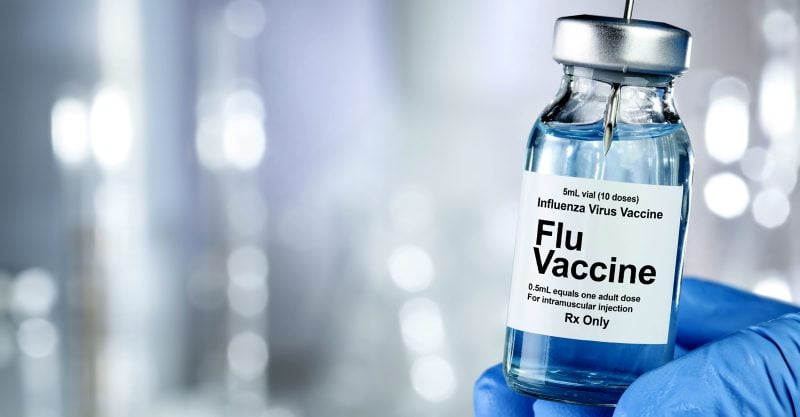 For years, concerns have been raised that previous flu vaccination seems to increase patients’ risk of contracting more severe pandemic illness. This occurred during the 2008 to 2009 flu season, when prior vaccination with the seasonal flu vaccine was associated with an increased risk of H1N1 “swine flu” during spring/summer 2009 in Canada.

A January 2020 study published in the journal Vaccine also found people were more likely to get some form of coronavirus infection if they had been vaccinated against influenza during the 2017 to 2018 flu season.

Again, in October 2020, another positive association was found between COVID-19 deaths and flu vaccination rates in the elderly, raising further questions about the potentially serious unintended side effects of annual flu shots.

Christian Wehenkel, a professor of forest genetics, forest ecosystem analysis, forestry, biometrics, forest growth and biodiversity with the Universidad Juarez del Estado de Durango, and a PeerJ editor, analyzed data sets from 39 countries with more than one-half million inhabitants. He expected to find that prior flu vaccination would be linked to lower COVID-19 death risk, but instead the data revealed the opposite.

Among people aged 65 years and older, flu vaccination was positively associated with COVID-19 deaths, meaning those who got a flu vaccine were more likely to die from COVID-19. “Contrary to expectations, the present worldwide analysis and European sub-analysis do not support the previously reported negative association between COVID-19 deaths (DPMI) and IVR [influenza vaccination rate] in elderly people,” Wehenkel wrote.

A May 2020 analysis by online news publication The Gateway Pundit similarly found that European countries with the highest COVID-19 death rates had high rates of flu vaccination — at least 50% — among the elderly. For instance, they wrote, “Denmark and Germany, with lower use of the flu vaccine, had considerably lower Covid-19 mortality.”

They attempted to update their figures for fall 2020, and were able to update COVID-19 mortality rates but did not obtain current vaccination data. Spikes in COVID-19 deaths were noted, which they suggested could be related to a sudden uptick in flu vaccination in countries that had previously lower vaccination rates:

“This [increase in COVID-19 deaths] could simply be due to the virus reaching endemic level later in east Europe, but another factor could be sudden increase in flu vaccination in counties of hitherto low uptake. Are they unwittingly endangering their seniors?

The World Health Organization is vigorously promoting flu vaccination in Europe, with posters warning ‘don’t bring home an unwanted visitor: protect your family by getting vaccinated.’ The Covid-19 pandemic has terrified the public and many people see a vaccine as the only means of escape.”

Wehenkel’s data, however, picks up where they left off, showing by scatterplot a clear association of COVID-19 deaths per million inhabitants with flu vaccination rate, up to July 25, 2020 (each dot represents a different European country): 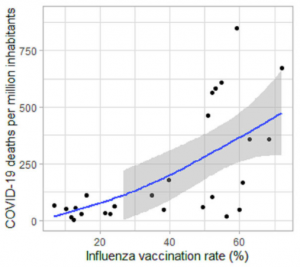 The problem with pathogenic priming

Given the PeerJ study’s highly controversial finding, which, if proven to be causative, would call into question annual flu vaccination, a publisher’s note at the top reminds readers that correlation does not necessarily mean causation.

“[T]his article should not be taken to suggest that receiving the influenza vaccination results in an increased risk of death for an individual with COVID-19 as there may be many confounding factors at play (including, for example, socioeconomic factors),” it reads.10 It also doesn’t rule out causation, however, and this is a potential link that must be urgently explored. The Gateway Pundit explained:

“It is right to ask the question: are patients who die of / with Covid-19 more likely to have received the flu vaccine? Given the clear correlation from Wehenkel’s data, an urgent investigation is needed to ascertain whether the large increase in Covid-19 deaths in eastern Europe in the autumn of 2020 correlates with an increase in flu jabs in autumn 2020 in those same countries.”

They didn’t stop there:

“This leads on to the further explosive question: are flu jabs not only correlative with Covid-19 mortality, but causative by way of pathogenic priming? If the data from autumn 2020 confirm correlation, causation should be investigated with rigor and urgency.”

What is pathogenic priming? It’s a scenario in which, rather than enhancing your immunity against the infection, exposure to a virus or vaccine enhances the virus’ ability to enter and infect your cells, resulting in more severe disease.

Research published in the Journal of Translational Autoimmunity confirmed that treatment with a vaccine may increase the risks associated with a wild type virus rather than protect against it, and concluded, as its title suggests, “Pathogenic priming likely contributes to serious and critical illness and mortality in COVID-19 via autoimmunity.”

Coronavirus vaccines have enhanced disease in the past

The Journal of Translational Autoimmunity article, written by James Lyons-Weiler with the Institute for Pure and Applied Knowledge, a nonprofit organization that performs scientific research in the public interest, explains how pathogenic priming occurred during previous trials of a SARS coronavirus vaccine:

“In SARS, a type of ‘priming’ of the immune system was observed during animal studies of SARS spike protein-based vaccines leading to increased morbidity and mortality in vaccinated animals who were subsequently exposed to wild SARS virus.

“The problem, highlighted in two studies, became obvious following post-vaccination challenge with the SARS virus … recombinant SARS spike-protein-based vaccines not only failed to provide protection from SARS-CoV infection, but also that the mice experienced increased immunopathology with eosinophilic infiltrates in their lungs.

“These types of unfortunate outcomes are sometimes referred to as ‘immune enhancement’; however, this nearly euphemistic phrase fails to convey the increased risk of illness and death due to prior exposure to the SARS spike protein. For this reason, I refer to the concept as ‘pathogen priming’.”

At the time, even long-time pro-vaccine advocate Dr. Peter Hotez, dean of the National School of Tropical Medicine and professor of pediatrics and molecular virology and microbiology at Baylor College of Medicine, was shaken. According to a feature published in PNAS:

“When SARS, also a coronavirus, appeared in China and spread globally nearly two decades ago, Hotez was among researchers who began investigating a potential vaccine.

In early tests of his candidate, he witnessed how immune cells of vaccinated animals attacked lung tissue, in much the same way that the RSV vaccine had resulted in immune cells attacking kids’ lungs. ‘I thought, ‘Oh crap,’’ he recalls, noting his initial fear that a safe vaccine may again not be possible.”

NBC News Chicago reported the death of an 18-year-old girl from Tinley Park, Ill., who died from COVID-19 in December 2020 just three days after being hospitalized. It’s the type of tragic story that strikes fear in millions, but it’s important to remember that this type of death is extremely rare.

The COVID-19 survival rate among newborns to age 19 is 99.997%, according to data from the U.S. Centers for Disease Control and Prevention, cited by Dr. Reid Sheftall.

What this heartbreaking loss should trigger, however, is increased investigation into why a previously healthy teenager died so unexpectedly from a virus that’s rarely dangerous in that age group.

In an interview, her mother stated that she had gotten a flu shot. Could this have been a factor in her body’s severe, and ultimately fatal, response to the virus? It’s impossible to know, but given the increasing research suggesting flu vaccination may worsen viral illness, it’s a connection that must be considered.

Research published in the Journal of Virology in 2011, for instance, found that seasonal flu vaccine may weaken children’s immune systems and increase their chances of getting sick from influenza viruses not included in the vaccine.

“[L]ong-term annual vaccination using inactivated vaccines may hamper the induction of cross-reactive CD8+ T cell responses by natural infections and thus may affect the induction of heterosubtypic immunity. This may render young children who have not previously been infected with an influenza virus more susceptible to infection with a pandemic influenza virus of a novel subtype,” the researchers noted.

Flu shots could be ‘potential contributors’ to pandemic

Dr. Allan S. Cunningham, a retired pediatrician, reiterated what the data bear out — that flu vaccines should be evaluated as potential causative agents or, at least, contributors to the COVID-19 pandemic. In a rapid response to an article published by The BMJ, he stated:

“A randomized placebo-controlled trial in children showed that flu shots increased fivefold the risk of acute respiratory infections caused by a group of noninfluenza viruses, including coronaviruses …

Such an observation may seem counterintuitive, but it is possible that influenza vaccines alter our immune systems non-specifically to increase susceptibility to other infections; this has been observed with DTP and other vaccines. There are other immune mechanisms that might also explain the observation.

To investigate this possibility, a case-control study is in order … Influenza vaccines have become sacred cows in some quarters, but they shouldn’t be.”

Meanwhile, in the U.S. the U.S. Centers for Disease Control and Prevention reported that the percentage of respiratory specimens submitted for influenza testing that test positive decreased from greater than 20% to 2.3% since the start of the pandemic. In short, flu has essentially disappeared, for reasons unknown. But even while stating that flu cases are next to nonexistent this season — they still want you to get your flu shot, “especially this season.”