Big Tech is looking to “disrupt” the highly lucrative U.S. healthcare market, according to an analyst focused on the tech industry, but the path forward isn’t without obstacles — including concerns about data collection and privacy protection. 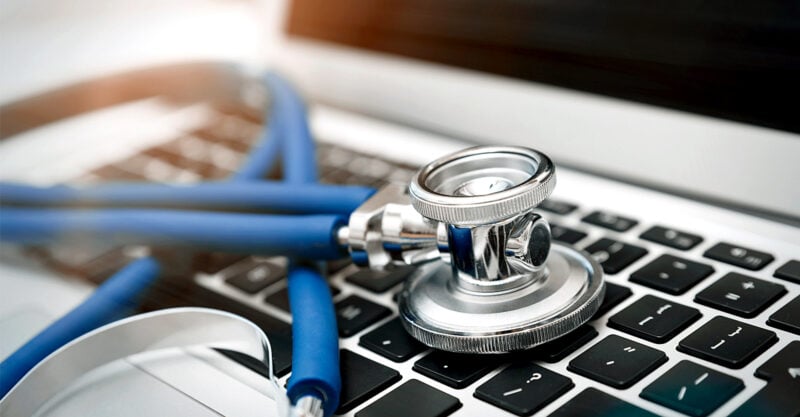 Big Tech is looking to “disrupt” the highly lucrative U.S. healthcare market, according to an analyst focused on the tech industry.

According to Pharmaphorum, a pharma industry news site, COVID-19 helped accelerate what was already a significant Big Tech push into healthcare “thanks to their expertise in data analytics and massive computing power.”

Artificial Intelligence (AI) is expected to drive this expansion — and Apple is one of the companies best positioned to benefit from this growth, the report said.

Analysts forecast a wide array of potential healthcare applications based on AI, AR and VR, including medical imaging, drug discovery and the use of “digital twins” — or digital avatars — of oneself.

One report, which focused on virtual reality (VR) and augmented reality (AR) in healthcare, predicts this segment of the market — now worth nearly $2.7 billion — will grow almost fourfold, to $9.7 billion, over the next five years.

A “Healthcare in Metaverse Market” analysis predicts this sector will be worth more than $5.3 billion by 2030.

Another indication of growth potential for tech companies? A 2021 survey found about 11% of U.S. adults already use social media for “reliable health information.”

However, a path toward “healthcare disruption” may not come without obstacles, including concerns about data collection and privacy protection.

For example, a 2019 internal meeting at Apple to discuss plans for developing in-house primary care services reportedly led to “questions about data,” leading some attendees “to conclude critical questions were unwelcome” — and to the departure of a mid-level manager from the company some weeks later.

A recent Forbes article on the growth of AR and VR technologies in healthcare pointed out that “increased reliance on technology always creates vulnerability” and raised questions about how developers will “ensure security and privacy as patient data is increasingly being transmitted digitally and in the cloud.”

The author of the article, a physician, wrote:

“Healthcare by definition is a humanistic profession,” he added, questioning if “by replacing reality with virtual and augmented reality … healthcare [is] doing itself a disservice with regards to eliminating the personal aspect of the patient-physician relationship.”

Similarly, a Pharmaphorum article on Apple questioned whether the company’s healthcare ambitions are “too broad,” pointing out that “a lot of consumers don’t trust big tech, so not every user is readily inputting all their health information into these devices.”

According to Pharmaphorum, “Although tech companies declare their platforms are patient-centric, patients not trusting what companies do with their data inevitably causes difficulties in the company’s ambitions to revamp the healthcare industry.”

And industry analyst Gene Munster raised the issue of antitrust violations. “The government will most likely not allow Big techs to take over” but “could allow these companies to participate” in the market, given its highly fragmented nature in the U.S. and the “maze of operational regulations” those active in the healthcare market face.

Apple outlined plans to expand its reach in the healthcare industry and step up “collaboration with medical researchers and public health authorities,” in a July report, “Empowering People to Live a Healthier Day.”

9to5Mac, a tech industry publication, last month speculated the company may choose to follow Amazon’s lead and double on its existing health-related offerings by acquiring other companies in the industry.

Apple has been active in health-related endeavors since 2014, when it released its Apple Health app, and a year later, its Apple Watch wearable device.

According to Apple, since releasing those products, the company “has introduced a wide array of innovative health and fitness features, with the goal to provide users with easy-to-understand, meaningful insights so they can be empowered to live a healthier life.”

Apple’s 60-page report argues the company is a force to be reckoned with in the healthcare realm, as a result of the “wide array of health apps and partnerships” it currently offers, its partnerships with medical and research institutions, and promises to “build on that foundation.”

Apple’s report states the company’s health-related work “primarily falls into two categories”: personal health and fitness features on devices such as the Apple Watch and the iPhone, and “the work we are doing with the medical community to support research and care.”

The company lists “four pillars” of its health and fitness features:

The company said its “users can now store more than 150 different types of health data from Apple Watch, iPhone and connected third-party apps and devices in one central view in the Health app,” offering “actionable, science-based insights that break down barriers between users and their health information.”

Users of these products can access “available health records data from connected institutions in the U.S., U.K. and Canada.” Specifically, “Health Records on iPhone … is now available to patients at over 800 institutions across over 12,000 locations,” according to the report.

Apple also said its health-related offerings are “all designed with privacy in mind.”

The report names several institutional collaborators, including the World Health Organization, the Harvard T.H. Chan School of Public Health, the University of Michigan, the American Heart Association, the National Institute of Environmental Health Sciences and Brigham and Women’s Hospital.

The report also describes Apple’s “Medications experience” as one that “helps users manage and track medications, vitamins, and supplements they take by allowing them to create a medications list, set up schedules and reminders, and view information on their medications in the Health app.”

As far back as 2016, Apple considered developing primary care clinics, via a “subscription health service that would combine virtual and in-person care provided by Apple doctors, enhanced with continuous health monitoring by the customer’s Apple Watch and iPhone.”

Apple paused the project. But Apple Magazine last month suggested the company hasn’t fully abandoned the idea, especially as it “has built a team of clinicians, engineers, and product designers to work on new health services” and has taken over health clinics near its headquarters.

Alphabet (Google): ‘using the power of data to change how healthcare is managed and delivered’

Alphabet, Google’s parent company, has faced some difficulties in the healthcare sector, shuttering its dedicated health unit in 2021 for instance.

But the setback hasn’t curtailed Alphabet’s investments in the healthcare realm.

Google also established Verily, a life sciences research organization “dedicated to using the power of data to change how healthcare is managed and delivered” as an independent subsidiary.

The Verily subsidiary “has a broad focus in healthcare and life sciences, with projects ranging from biomedical research to virtual care to wearables to even technology for mosquito eradication.”

It also has “steadily extended its reach into diverse areas to include care solutions for sleep apnea and diabetes to developing devices like miniaturized continuous glucose monitors,” while also broadening its focus to “COVID screening, testing and research programs.”

The Healthcare Technology Report recently ranked Verily no. 17 in its list of the top 100 healthcare technology companies of 2022.

As of June 2022, Alphabet had invested $1.7 billion on “futuristic health ideas” — far exceeding the $100 million in combined expenditures on such projects by the other “big tech” companies.

In the second quarter of this year, the company reported revenue growth of 16%, driven, at least in part, by its focus on consumer health and new partnerships with major healthcare systems.

One such partnership, announced in July, was with the Health Information Sharing and Analysis Center, where Alphabet will serve as an ambassador and will “share its intelligence, best practices and experts in the healthcare sector.”

Alphabet also made waves in the healthcare industry through its open-source AI program, AlphaFold, that “aids researchers in visualizing protein structures” and through its DeepMind AI division, credited with success in solving protein folding.

Alphabet is listed as a company poised to significantly influence the “Internet of Things”  healthcare market in the coming years, along with companies such as Microsoft.

Facebook’s parent company, Meta, hasn’t been as active in healthcare as Amazon, Apple or Alphabet, but it appears to be gearing up to increase its presence and activity in the market.

Earlier this year, the company posted new positions for health algorithm specialists, architects and communication managers who would be based in New York and California.

The company also hired John Rumsfeld, previously the chief science officer at the American College of Cardiology, to lead its health technology research.

In the realm of technological development, Meta has been working on developing smart glasses and the Oculus VR platform.

According to Forbes, these products have “significant potential applications in the realm of healthcare,” including possibilities such as “remote monitoring of patients that require critical care; better data and insights into clinical outcomes (e.g. blood sugar monitoring, heart rhythm tracking, etc.); [and] augmented tracking of physical health, virtually.”

But Meta and Facebook don’t inspire confidence when it comes to users’ privacy, especially in light of the recent news that Meta was served with a class action lawsuit alleging the company is “unlawfully collecting sensitive healthcare data about patients for targeted advertising.”

The suit specifically names a Meta product known as Meta Pixel, which is a “piece of code that can be injected into any website to aid with visitor profiling, data collection, and targeted advertising,” and which “takes up the space of a single pixel,” which provides it with “stealthiness.”

The suit alleges that the “tracking and data collection … takes place in medical portals beyond login walls, where patients enter highly sensitive information about themselves, their conditions, doctors, prescribed medication, and more,” and that “neither the hospitals nor Meta informs the patients about the data collection” or request consent.

Plaintiffs reportedly realized their privacy was being violated when Facebook “began targeting them with advertisements tailored explicitly for their medical condition.”

A recent investigation found Meta Pixel in use in 30% of the 80,000 most popular websites, including many healthcare-related sites.

The suit states that Meta’s tracking code is present on the websites of 33 of the top 100 hospitals in the U.S., which represented over 26 million patient and outpatient visits in 2020, while in seven instances “the code runs beyond password-protected patient portals.”

Meanwhile, ByteDance, another social media company (and owner of TikTok) is venturing into healthcare, through the $1.5 billion acquisition earlier this month of Chinese healthcare organization Amcare Healthcare. The acquisition was made by Xiaohe Health, ByteDance’s China-based healthcare unit.

Amcare, founded in Beijing in 2006, offers a range of medical services, including “maternity care, women’s health and pediatrics.” It also operates Amcare Women’s and Children’s Hospital in Beijing.