47% of New Drugs Come With Price Tag of $150,000 or More, Prompting Calls for Congress to Rein in Big Pharma

Research published Wednesday in JAMA estimates close to half of all new brand-name prescription drugs launched in the U.S. in 2020 and 2021 came with an original price tag of at least $150,000 a year. 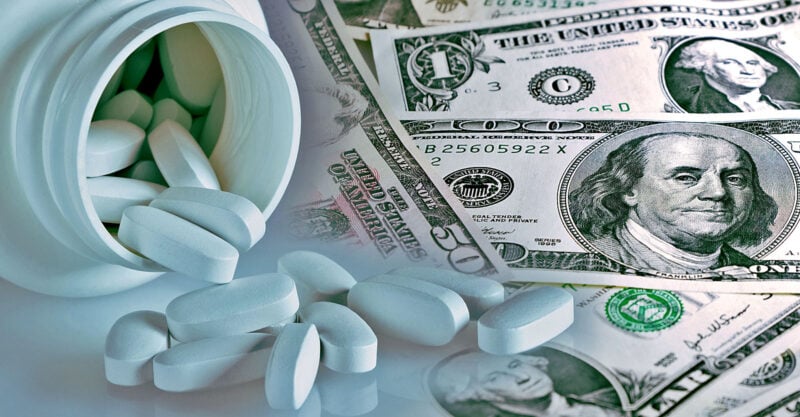 Research published Wednesday in the medical journal JAMA estimates that close to half of all new brand-name prescription drugs launched in the U.S. in 2020 and 2021 came with an original price tag of at least $150,000 a year, a finding that sparked fresh calls for Congress to rein in the pharmaceutical industry’s virtually unchecked power to drive up costs.

Authored by researchers with the Program on Regulation, Therapeutics and Law at Brigham and Women’s Hospital, the new analysis finds that “from 2008 to 2021, launch prices for new drugs increased exponentially by 20% per year.”

“In 2020-2021, 47% of new drugs were initially priced above $150,000 per year,” the researchers wrote. “The trend in prices for new drugs outpaces growth in prices for other healthcare services.”

“Unbelievable,” Nancy LeaMond, chief advocacy and engagement officer for the AARP, tweeted in response to the figures.

The authors of the new analysis stress that prescription medicine prices are rising so quickly in the U.S. because profit-seeking drug manufacturers are permitted to “freely set prices after approval,” resulting in far higher costs than those seen in Canada, Germany, France and other wealthy nations.

“Prescription drug spending in the U.S. exceeded half a trillion dollars in 2020,” the researchers wrote.

“In response to the current trends, the U.S. could stop allowing drug manufacturers to freely set prices and follow the example of other industrialized countries that negotiate drug prices at launch.”

Late last year, House Democrats passed Build Back Better legislation that contained a provision allowing Medicare to negotiate the prices of a subset of prescription drugs directly with pharmaceutical companies.

But even that modest reform — the result of a compromise with a group of pharma-friendly House Democrats — died in the Senate due to obstruction from Sens. Joe Manchin (D-W.Va.) and Kyrsten Sinema (D-Ariz.).

Advocates pointed to the new study as further evidence of the need for action from Congress as the pharmaceutical industry continues hiking drug prices in 2022.

Despite his role in blocking the Build Back Better legislation, Manchin claimed last week that he supports allowing Medicare to negotiate drug prices and other reforms to cut costs.

“You literally killed the bill to do this,” responded Rep. Ilhan Omar (D-Minn.).

Sen. Bernie Sanders (I-Vt.), the chair of the Senate Budget Committee, replied by pushing Manchin to drop his opposition to the Build Back Better package.

“Let’s cut drug prices in half by strengthening the provision in the House-passed Build Back Better legislation to allow Medicare to negotiate drug prices like the [Department of Veterans Affairs] has done for years, and pass the whole package with 50 votes,” Sanders wrote on Twitter. “It’s time to vote.”