After ordering an autopsy, Dr. Aseem Malhotra, a U.K. cardiologist, was convinced the mRNA COVID-19 vaccine caused the cardiac death of his previously healthy father. 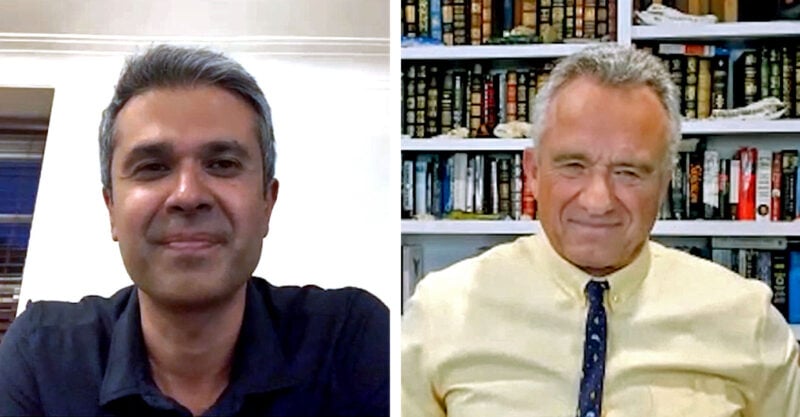 Dr. Aseem Malhotra, a consultant cardiologist trained by the U.K.’s National Health Service, believes Big Pharma and Big Food are enemies of democracy — that’s because the “corporate machine” is “suppressing free speech” and doing things that are “anti-human.”

In a recent episode of “RFK Jr. The Defender Podcast,” Maholtra told Robert F. Kennedy, Jr., that he routinely asks patients and members of the public this question: “Are you aware that the regulators who are approving drugs get most of their funding from the drug industry? How do you feel about that?”

“Nobody finds that acceptable,” Malhotra said.

“So what we’ve got is unjust, undemocratic, unethical laws that are perpetuating this problem,” he told Kennedy. “We need to change those laws.”

Malhotra recently published a two-part research paper, “Curing the pandemic of misinformation on mRNA COVID-19 vaccines through real evidence-based medicine” in the Journal of Insulin Resistance.

He also was featured in the new U.K. documentary, “Safe and Effective: A Second Opinion.”

In his interview with Kennedy, Malhotra shared how he was one of the first to take the Pfizer vaccine and how he publicly promoted the vaccines on TV. But that was before he thoroughly reviewed the scientific safety data, which convinced him the vaccines pose unprecedented harm.

Malhotra told Kennedy he was prompted to look into the safety data on the COVID-19 vaccine when his father — “a very eminent doctor in the U.K., considered one of the most prolific advocates for the National Health Service” — suffered an unexplained sudden cardiac death in July after getting an mRNA COVID-19 vaccine.

“He was a very fit guy,” Malhotra said. “I knew his cardiac history inside and out. Everybody was shocked in the community about it because he was considered amongst his peers as one of the fittest guys.”

Malhotra ordered an autopsy and the results were “shocking,” he said. The autopsy showed his father had experienced rapidly progressive heart disease, causing two severe stenoses, or blockages, in his arteries.

“It didn’t make any sense to me. I couldn’t explain it,” Malhotra said.

How did my father die?

Kennedy agreed and pointed out that Pfizer’s clinical trial data showed a higher “all-cause mortality” rate for those who got their vaccine than for those who did not. Malhotra further noted that the trial showed no statistically significant reduction in COVID-19 mortality.

“It makes you think,” Malhotra said, “because suddenly we’ve gone from that trial leading to the [governments’] approval, to coercion, to mandates, to suddenly it being gospel truth that the COVID vaccine has saved millions of lives. I don’t think the evidence is there to say that.”

“So that when you put all of this together it paints a very concerning, disturbing picture of what ultimately emerged in terms of the pandemic and misinformation on this.”

Malhotra and Kennedy discussed the “system failure” that occurred when Big Pharma captured governmental regulatory agencies, allowing them to fuel and exploit the COVID-19 pandemic and the scientific misinformation surrounding it.

But now many doctors, Malhotra said, are speaking out about the lack of scientific basis for the mRNA COVID-19 vaccines. “The data is strong and we need to pause this right now, investigate it and figure out what happened.”

“And then we need to reconstruct the system moving forward so it never happens again,” he added.