In the first study of its kind, Swedish researchers found 5G radiation causes typical symptoms indicative of “microwave syndrome.” The study, published in the journal Medicinsk Access, also confirmed that non-ionizing radiation — well below levels allowed by authorities — can cause health problems. 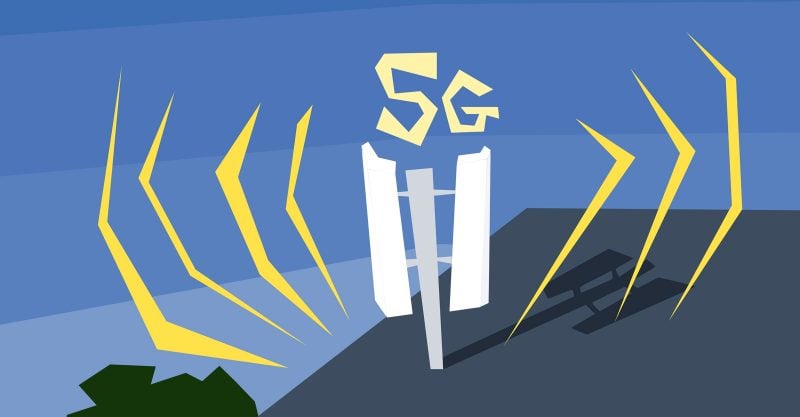 The study, published in the journal Medicinsk Access, also confirmed that non-ionizing radiation — well below levels allowed by authorities — can cause health problems.

According to the study, a 5G base station installed on the roof of an apartment building caused extremely high levels of non-ionizing radiation in the apartment of the two persons living just below the station.

Within a few days of exposure, the residents of the apartment developed symptoms of microwave syndrome. After moving to a place with lower radiation, the symptoms quickly decreased or disappeared.

Measurements before and after the installation of the 5G installation showed that switching to 5G led to an increase in radiation from 9 milliWatts/m2 to a maximum of 1,690 milliWatts/m2 — high enough for both acute and long-term health effects.

Measurements were taken both before 5G deployment and on several occasions afterward.

Before 5G was installed there were already base stations for 3G or 4G in the same location directly above the apartment. So even though the radiation level before switching to 5G was high, after switching on 5G, the levels increased 188 times.

This shows that non-ionizing radiation from a 5G base station placed on a roof close to a living space can be exceedingly high.

The highest radiation level was detected in the bedroom, located just 5 meters below the base station, prompting the authors of the study to call for further investigation into the effects on people exposed to 5G radiation levels.

“It is shocking that this is the first study performed on 5G health effects, three years after the roll-out of this technology started and after having already exposed the population to 5G high-intensity pulsed microwave radiation for several years,” Mona Nilsson, managing director of the Swedish Radiation Protection Foundation and co-author of the study, told The Defender.

“There are no studies that show that this technology and the increasing and common exposure to 5G and 4G base stations at levels allowed by the government is safe. On the contrary, studies have repeatedly and convincingly showed increased risk of the microwave syndrome and cancer, at levels that are far below the levels that the government and the telecom companies falsely claim are safe.”

Oncologist and researcher Dr. Lennart Hardell from the Environment and Cancer Research Foundation, co-authored the study with Nilsson.

In the study, a man and a woman, ages 63 and 62 years old, were exposed to 5G from the roof of their apartment building, beginning in November 2021. The individuals recorded their symptoms both before and after the exposure began.

The second column (Before 5G) displays the self-assessed symptoms before 5G was deployed in the apartment, the third column (With 5G) shows the self-assessment after 5G was installed, and the fourth column (After 5G) indicates the perceived symptoms after moving to the new apartment, which had much lower non-ionizing radiation levels.

All symptoms ceased or decreased within 24 hours (for the man) and 1-3 days (for the woman) of moving to the new apartment with low radiation levels.

Microwave syndrome was described in the 1970s by scientists in the former Soviet Union who were researching occupational risks due to exposure to non-ionizing radiation.

The researchers noted the symptoms subsided when exposure to non-ionizing radiation ceased or decreased.

The most common cause of microwave syndrome symptoms is non-ionizing radiation exposure from cell phones, base stations for wireless communication, WiFi and smart meters.

The exposed person usually experiences symptoms in several bodily organs, although most often the symptoms are related to the central nervous system and the heart.

The symptoms vary from person to person, as sensitivity to microwave radiation is individual.

Several studies during the last 20 years have shown increased risk of microwave syndrome symptoms among people living near mobile phone base stations.

Increased non-ionizing radiation due to 5G

The Swedish study not only showed that 5G causes microwave syndrome almost immediately, but it also found the levels of non-ionizing radiation increased massively.

The values measured ​​in the home of the man and woman in the study (maximum 1,690 milliWatts/m2) are significantly lower than those deemed safe (10,000 milliWatts/m2 as an average value over 6 minutes) ​​by the Swedish Radiation Safety Authority (SSM).

Because microwave radiation tends to fluctuate wildly, and SSM’s reference is an average value, this means the maximum value is allowed to be significantly higher than 10,000 milliWatts/m2, and it does not protect against large fluctuations which are in fact more biologically active.

Furthermore, SSM’s reference value ​​does not protect against long-term harmful effects, such as the microwave syndrome or cancer, that come with prolonged exposure from base stations, as is the case with exposure in homes, offices or schools.

The reference value applies only to protection against immediate effects as a result of radiation so intense that it heats up tissues within 30 minutes.

This means the general public is completely unprotected against effects other than acute thermal damage, despite the fact that such effects have been shown to cause nervous system harm, oxidative stress and DNA damage.

Prior to their study, the authors noted, there were no scientific studies showing no risk of harmful health effects from chronic exposure to non-ionizing radiation from base stations at levels corresponding to SSM’s reference value, or at the levels measured in this case study.

There are not even any studies of any long-term risks of combining the non-ionizing radiation from 4G and 5G.

Hardell and Nilsson concluded, “To claim that exposure to radiation does not entail risks because the exposure is lower than SSM’s reference value thus has no scientific basis at all.”

In 2016, a group of researchers and doctors recommended maximum exposure during the day should be 0.1 and at night 0.01 milliWatts/m2.

However, despite extensive evidence of health risks, microwave radiation in the environment is increasing sharply. Still, the outdated reference value is used despite the fact it is demonstrably lacking protection against microwave syndrome and many other health risks.

Lennart Hardell and Mona Nilsson called for in-depth investigations of persons complaining of microwave syndrome-related problems who may be exposed to elevated levels of microwave radiation.

“Careful [patient] history must be taken to investigate various sources of microwave radiation,” they wrote. “In addition, the investigation should be supplemented with measurement of the radiation both in the home and at the workplace.”

Such patients must be properly investigated and given a medical diagnosis, with careful consideration taken to eliminate or reduce the disease-causing factor — that is, reduce exposure to non-ionizing radiation, as being the most important. This should be done as early as possible to reduce the risk of irreversible damage or chronic disease.

Furthermore, it has to be emphasized that the measured values in the studied apartment after the installation of 5G make the home uninhabitable from a medical point of view, regardless of the fact that the radiation is below the current reference values.

Nilsson said the telecommunications industry is “trying its hardest” to keep any information about the health hazards of this technology from the public “with the help of their captured organizations, the World Health Organization, the International Commission on Non-Ionizing Radiation Protection and other governmental agencies.”

She added: “Major telecom companies know the radiation they force on the public is dangerous. They have known it for decades, but still they do all they can to hide the truth from the public and force the technology on us all.”