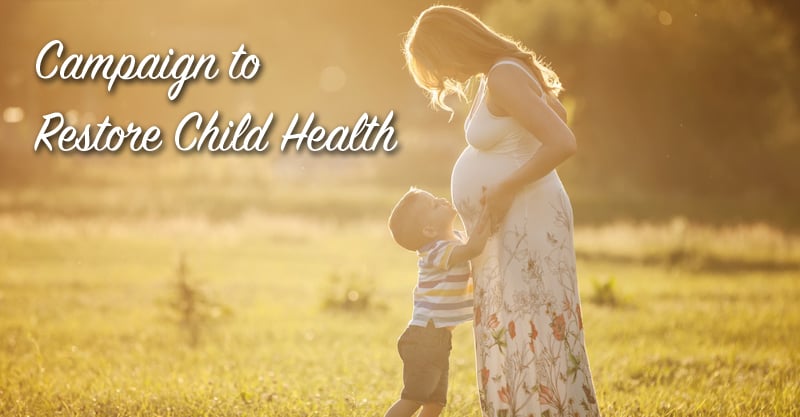 Washington, DC – Children’s Health Defense believes the health of American’s children is in crisis. We are facing epidemics of chronic health disorders that are crippling our children in far greater numbers than in any generation in history. It is time for action! We need to make our children healthy again! #restorechildhealth #childrenshealthdefense

In Robert F. Kennedy, Jr.’s article to kick off the Campaign to Restore Child Health, he highlights these facts: 54% of American children are chronically ill, 13% of America’s children are in special education, one in six children has a developmental disorder, millions suffer from allergies including deadly peanut allergies, almost 11% have attention deficit hyperactivity disorder (ADHD), 15,000 or more children were diagnosed with cancer this year alone, and one in 68 has autism. Our children are suffering from autoimmune illnesses, debilitating anxiety, Tourette’s, and sensory issues. Tragically, infant mortality including Sudden Infant Death Syndrome (SIDS) in America is much higher than in other high-income countries while infants receive more vaccines in their first year of life than anywhere in the world.

Children’s Health Defense is recognizing October 2017, Children’s Health Month, by launching a set of videos highlighting the chronic health issues plaguing our children.  In our Campaign to Restore Child Health, CHD is asking for everyone’s help to demand vaccine safety science. We can and must do better for our children!

Eye witness testimony has always been accepted in our judicial system. Even in today’s courts where DNA results can be used as evidence, eye witness testimony shares equal weight with the law, courts and juries. The Children’s Health Defense believes the testimonies of thousands of parents who are eye-witnesses to vaccine injury and subsequent sickness/disease.

Our government health leaders who should be protecting children’s health are urging parents to vaccinate all children without doing the necessary safety studies. Children’s Health Defense wants:

CHD is asking parents and doctors to join the movement to restore child health! Followers can make their own one to two minute videos of their children’s health conditions and how these illnesses have affected family life. CHD will archive these videos and make sure our government officials receive and consider this eye-witness testimony. Participants are asked to set their video to public and use the hashtags: #restorechildhealth #childrenshealthdefense