Type 1 Diabetes on the Rise in Young Children: Is Anyone Paying Attention? 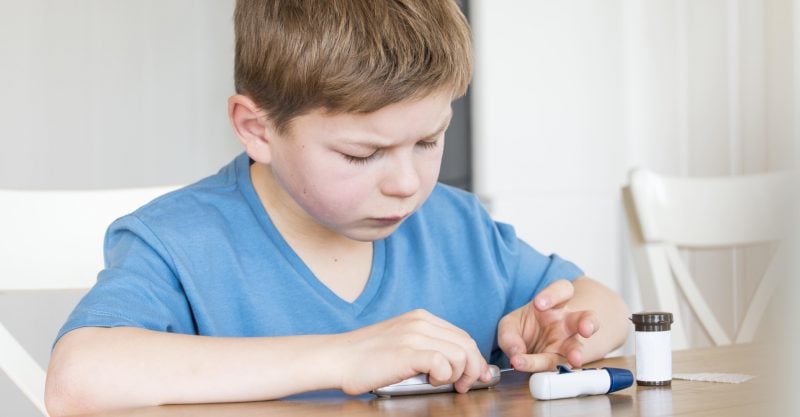 Chronic illness is at epidemic levels in the United States as well as other wealthy nations. Autoimmune diseases, though tending to receive less attention than headline-grabbing afflictions such as cancer and heart disease, have experienced some of the most rapid increases. Comprising more than 80 different diseases, autoimmune conditions arise when the immune system attacks the body’s own organs, tissues and cells.

Type 1 diabetes—also called insulin-dependent diabetes mellitus (IDDM) or juvenile diabetes— is one of the most common and rapidly increasing autoimmune diseases in children. The U.S. has more children with type 1 diabetes than any other country in the world, with a prevalence in children and adolescents that grew by 21% from 2001 to 2009. The U.S. also has the highest number of new cases annually, well ahead of India (with a population four times bigger). From 2001 to 2015, new cases of type 1 diabetes in the U.S. increased by roughly 2% to 4% annually in those age 19 or younger (depending on the region), especially among 10-14 year-olds. Meanwhile, the rate of new cases in adults fell. A study of type 1 diabetes in Colorado spanning the mid-1990s to 2010 reported an even more alarming rate of increase for new cases—5.7% annually—and particularly high rates in the 5-9 year age group. Europe has experienced similar rates of increase but with the most rapid increase reported in the 0-5 age group.

…life expectancy for individuals diagnosed at younger ages is about 10 years shorter than for those diagnosed at later ages.

Because of its often early age of onset and its potentially serious consequences, type 1 diabetes is not something to take lightly. A new study in The Lancet reports that about half of those with type 1 diabetes receive their diagnosis before age 14, and life expectancy for individuals diagnosed at younger ages is about 10 years shorter than for those diagnosed at later ages. In addition, individuals with earlier-onset diabetes (before the age of 10) “have a 30-times greater risk of serious cardiovascular outcomes…than those in the general population” (whereas the risk is only six times greater if the type 1 diabetes is diagnosed when the person is in their late 20s). Diabetes often co-occurs with other autoimmune conditions, including celiac disease, Crohn’s disease, thyroid and adrenal disorders, rheumatoid arthritis, systemic lupus erythematosus (SLE) and the neuromuscular disease myasthenia gravis. A childhood diagnosis of type 1 diabetes has also been shown to result in lower earnings and more unemployment in young adulthood compared to adults who are diabetes-free.

The substantial increase in the incidence of [type 1 diabetes] among children over recent decades cannot be the consequence only of enhanced genetic disease susceptibility in the population, but largely must be caused by changes in lifestyle and environment.

Puzzling over the dramatic rise of type 1 diabetes in young children over the past several decades, scientists are reaching consensus that environmental factors play a significant role. As early as 1997, a report on the “marked” rise of type 1 diabetes cases in under-five-year-olds in England suggested that “environmental influences encountered before birth or in early postnatal life are likely to be responsible.” Current researchers continue to make the same case, stating, “The substantial increase in the incidence of [type 1 diabetes] among children over recent decades cannot be the consequence only of enhanced genetic disease susceptibility in the population, but largely must be caused by changes in lifestyle and environment.”

Two of the most widely discussed environmental candidates are dietary factors and viral infections. In light of the hypothesis that viruses can be precipitating factors, it has appeared logical to at least some researchers to consider whether live virus vaccines also could be contributors, particularly given the temporal association between expansion of the childhood vaccine schedule and the escalating type 1 diabetes rates.

The question attracted heated debate in the late 1990s, when virologists in Finland stated that “only a few studies are available on the subject and therefore the possibility of a link between vaccination and diabetes mellitus cannot be excluded” but nevertheless concluded that “there is no clear evidence that any currently used vaccine can…induce diabetes in humans.” In response, an immunology researcher named JB Classen wrote to emphatically disagree, citing epidemiology and animal toxicology studies showing a link between vaccination and increased risk of type 1 diabetes for four vaccines: hepatitis B (if started at two months of age), Haemophilus influenzae type B (Hib), BCG (against tuberculosis) and measles-mumps-rubella (MMR). Regarding the latter, Classen described “a spike in the incidence of type 1 diabetes mellitus…in Finland in 1983 following the introduction of the MMR in both the 0 to 4 and 5 to 9 age groups who received the vaccine starting in late 1982, but not in the 10 to 14 age group who did not receive the vaccine.” In his subsequent work, he continued to identify statistically significant clusters of type 1 diabetes occurring two to four years after receipt of vaccines.

Perhaps most importantly, Classen encouraged researchers to take a careful look at the overall risk-benefit calculus:

“Research into immunisation has been based on the theory that the benefits of immunisation far outweigh the risks from delayed adverse events and so long-term safety studies do not need to be performed. When looking at diabetes—only one potential chronic adverse event—we found that the rise in the prevalence of diabetes may more than offset the expected decline in long-term complications of H influenzae meningitis. Thus diabetes induced by vaccine should not be considered a rare potential adverse event.”

In a 2001 article in Medical Hypotheses, Classen also outlined mechanisms “by which vaccines may affect the onset of [type 1 diabetes] or other immune-induced disorders” [emphasis added]. Numerous mechanisms are plausible, including: molecular mimicry (a phenomenon triggered by the foreign antigens in vaccines, which induce antibodies that cross-react to self-antigens); overstimulation of the immune system (prompting the release of proteins known to cause type 1 diabetes); skewing of the balance between cell-mediated Th1 immunity (the body’s first line of defense) and humoral-mediated Th2 immunity (responsible for the stimulation of antibodies); stimulation of macrophages (innate immune cells that are key players in both type 1 and type 2 diabetes); activation of “smoldering” (subclinical) autoimmunity through the action of powerful aluminum and other adjuvants; and replication and release of viruses (such as rubella) known to cause type 1 diabetes.

The need for long-term studies

Currently, attention is being brought to bear on the methodological flaws that characterize vaccine clinical trials, postlicensure monitoring and meta-analyses as well as the subtle and outright suppression of science that dares to question any aspect of vaccine safety. Illustrating the inappropriate design of some studies, a 2016 community-randomized controlled trial of the human papillomavirus (HPV) vaccine in adolescent boys and girls chose to assess safety and new-onset autoimmune disease (NOAD) by comparing an HPV group with a group receiving the hepatitis B virus (HBV) vaccine, rather than using a control group receiving an inert placebo. Roughly identical proportions of boys in both groups experienced “unsolicited” adverse events within 30 days and “medically significant conditions” by Month 12, allowing the investigators to blandly imply safety and conclude that “no increased NOAD incidences were observed” in HPV recipients compared to HBV recipients. This, despite the fact that type 1 diabetes was the most common NOAD and was one of three types of serious adverse events—all autoimmune—considered “possibly related to vaccination” by the investigators.

“Data linking vaccines to a rise in a wide variety of immunological diseases such as type I insulin-dependent diabetes mellitus…has outlined the pressing need for rigorous long-term vaccine safety studies.”

Classen chimed in on the topic of flawed study design years ago, calling for longer-term studies capable of detecting slower-to-emerge autoimmune diseases. Even so, one recent study that looked at 120 patients who had experienced adverse events with an autoimmune or inflammatory component after receiving adjuvant-containing vaccines found that “76% of the events occurred in the first 3 days post-vaccination,” including three patients diagnosed with Guillain-Barre syndrome within the three days. Another recent case report discussed a diagnosis of type 1 diabetes ascertained within a few weeks of a 14-year-old receiving a diphtheria-tetanus-acellular pertussis (DTaP) booster; a diagnosis of SLE followed more slowly, several years later.

Unfortunately, little has changed since Classen made the following remarks that are still well worth heeding:

“Vaccine studies have labelled a vaccine safe if it causes few adverse events in a usually small study group followed for no more than 30 days post-immunization. Data linking vaccines to a rise in a wide variety of immunological diseases such as type I insulin-dependent diabetes mellitus…has outlined the pressing need for rigorous long-term vaccine safety studies. It is becoming increasingly clear that the effect of vaccines on the immune system is much more complicated than originally believed, underlining the inadequacy of current safety studies, because vaccines differ from the infections they prevent and have different effects on the immune system.”