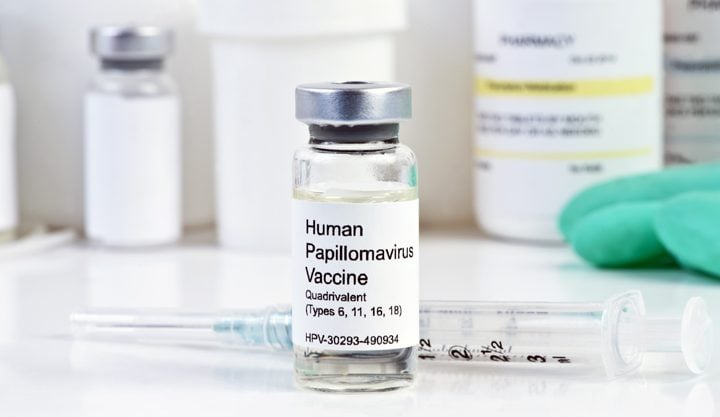 A new study published in Clinical Rheumatology exposes how vaccine manufacturers used phony placebos in clinical trials to conceal a wide range of devastating risks associated with HPV vaccines. Instead of using genuine inert placebos and comparing health impacts over a number of years, as is required for most new drug approvals, Merck and GlaxoSmithKline spiked their placebos with a neurotoxic aluminum adjuvant and cut observation periods to a matter of months.

Of the 16 HPV vaccine randomized trials, only two used an inert saline placebo. Ten of the sixteen compared the HPV vaccine against a neurotoxic aluminum adjuvant, and four trials used an already-approved aluminum-containing vaccine as the comparison.

Scientific researchers view double-blind placebo trials as the gold standard for testing new drugs. To minimize bias, investigators randomly assign patients to either a “treatment” group or a “control” (placebo) group and then compare health outcomes. The standard practice is to compare a new drug against a “pharmacologically inert” placebo. To minimize opportunities for bias, neither patients nor researchers know which individuals received the drug and which the placebo. However, in clinical trials of the various HPV vaccines, pharmaceutical researchers avoided this kind of rigor and instead employed sleight-of-hand flimflams to mask the seriousness of vaccine injuries.

Of the 16 HPV vaccine randomized trials, only two used an inert saline placebo. Ten of the sixteen compared the HPV vaccine against a neurotoxic aluminum adjuvant, and four trials used an already-approved aluminum-containing vaccine as the comparison. One does not have to be a scientist to understand that using aluminum-containing placebos is likely to muddy the comparison between the treatment and control groups. Critics of the HPV vaccine have pointed to the aluminum adjuvant as the most likely cause of adverse reactions, and some researchers have questioned the safety of using aluminum adjuvants in vaccines at all, due to their probable role as a contributor to chronic illness. The aluminum-containing placebos appeared to provoke numerous adverse reactions among the presumably unwitting patients who received them, allowing the pharma researchers to mask the cascade of similar adverse reactions among the groups that received the vaccines. Although both placebo and study groups suffered numerous adverse events in these studies, there were minimal differences between the two groups. The similar adverse outcomes in both groups allowed industry researchers and government regulators to claim that the vaccines were perfectly safe, despite manifold disturbing reactions. The Mexican researchers’ meta-review confirms the difficulty of ascertaining vaccine-attributable differences from this mess; the researchers identified only a few indications of “significantly increased systemic adverse events in the HPV vaccine group vs. the control group” across the 16 pre-licensure trials.

The HPV promoters found it more difficult to employ deceptive devices in the 12 post-marketing safety reviews, and the Mexican authors summarize some of the more noteworthy findings. In Spain, they found a ten-fold higher incidence of vaccine-related adverse events following HPV vaccination compared to “other types of vaccines.” In Canada, they found an astonishing one in ten rate of hospital emergency department visits among HPV-vaccinated individuals “within 42 days after immunization.” Still, the industry researchers did what they could to minimize these injuries. The Mexican reviewers criticize the authors of the various post-marketing studies for failing to ask essential questions, to evaluate the many serious adverse events, or to elaborate on their often-troubling findings.

Typically, FDA requires drug companies seeking approval for a new drug to observe health outcomes in both the placebo and study groups for 4-5 years. Vaccine manufacturers take advantage of FDA regulatory loopholes that allow fast-tracking of vaccines and cut that period down to a few weeks or even a few days. This means that injuries that manifest, or are diagnosed, later in life—most neurodevelopmental disorders, for example—will escape attention entirely.

Martínez-Lavin and Amezcua-Guerra point to clinical trial data posted on the FDA webpage for the quadrivalent Gardasil vaccine approved in 2006. Those clinical trials deployed a panoply of the kind of cunning deceptions used by industry and government researchers. Unlike many of the other HPV vaccine clinical trials, these clinical studies employed a true saline placebo.

Across the Gardasil clinical studies, a group of 15,706 females ages 9-45 and males ages 9-26 received the quadrivalent Gardasil vaccine. A control group of 594 individuals received an inert saline placebo. The industry researchers never explain the tiny relative size of the saline placebo group; it’s noteworthy that small size would have the effect of keeping unwanted signals weak. But a second control group of 13,023 received a so-called “spiked” placebo loaded with an aluminum adjuvant (amorphous aluminum hydroxyphosphate sulfate or AAHS). The large size of this “spiked placebo” group suggests that the decision to keep the saline placebo group small was strategic.

Putting aside the thorny ethical question of whether study participants were told that they were being injected with a neurotoxin with probable associations with Alzheimer’s, dementia and other forms of brain disease, the inclusion of both saline and aluminum placebos provided these researchers a chance to do some genuine science. But the FDA webpage shows the troubling gimmick that was then employed by the FDA and Merck, which seems deliberately designed to blur datasets in order to mask adverse effects during the clinical trials. The table showing relatively minor injection-site adverse reactions—one to five days post-vaccination—displays three distinct columns for the three groups: Gardasil recipients, the aluminum “placebo” recipients, and saline placebo recipients (see table below). In the table, “Intergroup differences are obvious,” in the words of the Mexican researchers. For example, roughly three and a half times more girls/women experienced injection site swelling in the Gardasil group compared to the saline group (25.4% vs. 7.3%). In fact, by all five measures, both the Gardasil recipients and the aluminum placebo recipients fared two to three times worse than the saline recipients. 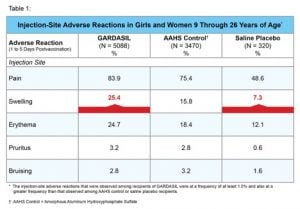 When it came time for Merck to report on the occurrence of more serious reactions, “Systemic Adverse Reactions” and “Systemic Autoimmune Disorders,” for example, the company scientists switched to a very different format. In these tables, the third column that reported results for the saline placebo recipients disappears. Instead, Merck combined the groups receiving the spiked aluminum placebo into a single column with the group receiving the genuine saline placebo (see example below). The merger of the two control groups makes it impossible to compare results for Gardasil versus the saline placebo or the aluminum placebo versus the saline placebo. In this way, Merck’s researchers obliterated any hope of creating a meaningful safety comparison. 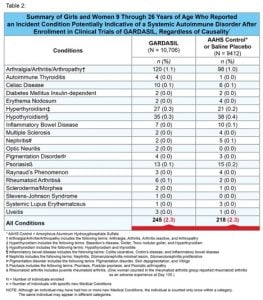 Given aluminum’s known neurotoxicity and its association with debilitating autoimmune conditions, it is unsurprising that there are no observable differences between the Gardasil and AAHS/saline groups. But, despite the researchers’ efforts to paper over adverse effects, they were not able to conceal the devastating health injuries to their human guinea pigs. The bottom line of these trials reveals a shocking truth: An alarming 2.3% of both their study and control groups had indicators of autoimmune diseases! These data are even more alarming when one considers that the observation period was curtailed after only six months. With this level of risk, it would seem that no loving parents would allow their daughter to receive this vaccine—particularly given the comparatively low risk posed by HPV in countries with appropriate cervical cancer screening tests. Even in countries such as India, where cervical cancer mortality is high due to late detection, leading Indian physicians argue that comprehensive screening should be the country’s top priority rather than the “panacea” of HPV vaccination.

Consider the math: According to the National Institutes of Health (NIH), an estimated 2.4 women per 100,000 die of cervical cancer in the US each year. On the other hand, the FDA’s Table 2 (above) shows that 2.3 per 100 girls and women developed an “incident condition potentially indicative of a systemic autoimmune disorder” after enrolling in the Gardasil clinical trial. It is difficult to understand how any rational regulator could allow more than two in 100 girls to run the risk of acquiring a lifelong autoimmune disorder, particularly when Pap smears are already doing an effective job of identifying cervical abnormalities. The NIH notes that the incidence and death rates for cervical cancer in the US declined by more than 60% after introducing Pap smear screening.

Based on the numerical outcomes of that study, the Mexican researchers calculated the likelihood of being actually “helped or harmed by the 9-valent HPV vaccine.” Their “worrisome” finding is that the “number needed to harm” is just 140, whereas 1757 women would need to receive the vaccine for a single one of them to enjoy its projected benefits.

Martínez-Lavin and Amezcua-Guerra make their own effort to illustrate the zany risk-benefit ratios associated with these vaccines when discussing the results of one of the 16 clinical trials. That study compared approximately 14,000 women who received either Gardasil 9 or the original quadrivalent Gardasil. Based on the numerical outcomes of that study, the Mexican researchers calculated the likelihood of being actually “helped or harmed by the 9-valent HPV vaccine.” Their “worrisome” finding is that the “number needed to harm” is just 140, whereas 1757 women would need to receive the vaccine for a single one of them to enjoy its projected benefits.

Merck found that astronomical casualty counts were equal among both Gardasil and aluminum “placebo” recipients. The inescapable implication is that aluminum adjuvants may be a principal culprit in the flood of injuries reported for the various HPV vaccines. This conclusion, if true, requires reevaluation of the use of aluminum adjuvants in several other vaccines, including some given to infants. Aluminum adjuvant levels have mushroomed since the 2003 removal of thimerosal from three pediatric vaccines. The following chart, prepared by Dr. Sherri Tenpenny, illustrates the stunning amount of aluminum in vaccines. 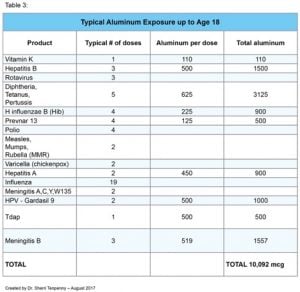 Multiple peer-reviewed studies have connected aluminum exposures to a range of autoimmune and neurological disorders, including dementia and Alzheimer’s disease, that have become epidemic coterminous with these aluminum exposures. A review in the European Journal of Clinical Nutrition warns of dangerous accumulation of aluminum in the brain when, as in the case of vaccination, “protective gastrointestinal mechanisms are bypassed.” It’s time to go back to the drawing board on HPV vaccines and aluminum adjuvants. More importantly, FDA needs to start requiring the same rigorous pre-licensing safety testing for vaccines that it has long required for other drugs. All existing vaccines, particularly those containing aluminum, should be safety-reviewed according to these more stringent standards.