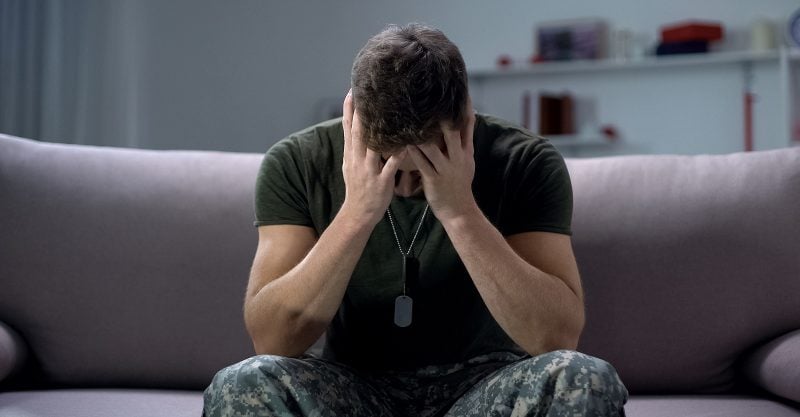 Since 2001, the modern combatant has endured numerous deployments overseas to Afghanistan and Iraq after a decade of relative peace following the Persian Gulf War in 1990. Across all services, members have engaged in traumatic combat situations with enemy, friendly, and civilian casualties resulting in 13% of veterans diagnosed with Post Traumatic Stress Disorder (PTSD). [Citations referenced in this article are contained in the full report.]

Military personnel have returned from dangerous deployments to face both public scrutiny about disputed wars and personal struggles with recollections of harrowing ordeals. Military encounter barriers to therapeutic interventions, with a priority given to drug therapy. US military members are routinely taking up to 19 prescription medications to enhance performance and reduce stress.The collateral damage is that, when current active duty, reserve members, and the National Guard are included, 20 veterans die by suicide every day in the US.

The 2018 Department of Defense Suicide Report (DoDSER 2018) details 325 active duty suicides with an additional 1,375 suicide attempts by 1,219 unique individuals. The reserve component reported 81 suicides and the National Guard reported 135 suicides. The 2019 National Veterans Suicide Prevention Annual Report summarizes 6,139 veteran suicides in 2019. Veteran suicides have been increasing annually since 2006. The number of veteran suicides has exceeded 6,000 annually from 2008 to 2017. Military members and veterans have a higher risk of suicide than their civilian counterparts. Veterans ages 18-34 having the highest suicide rate among all military subgroups with an increase of 76% from 2005 to 2017.

The two aforementioned reports have detailed the frequency, demographics, event characteristics, basic health information, contextual factors or stressors with each military suicide. These reports are intended for surveillance only and do not provide any analysis of causation.

Surprisingly, DoDSER 2018 reports that 47% of active duty suicides had zero deployments. The 2019 Veterans Suicide Prevention Annual Report indicates that 919 suicides were from never federally activated reserve units and National Guard. Hazardous duty is a co-factor in PTSD and suicides, but this high rate of military members who have never deployed indicates other potentially non-trauma factors are contributing to the suicide rate. What else is going on behind the numbers?

The goal, a participant in crafting the policy said, was to give SSRIs a ‘green light’ without saying so.

Veterans age 18-34 have the highest suicide rates at 45 per 100,000, while veterans age 55-74 had the lowest suicide rate at 27 per 100,000. Because younger veterans have a greater risk, other exposures should be investigated that older veterans do not have. One possibility is the increasing trend of military suicides in the US began in 2006 and is temporally correlated with the Pentagon’s 2006 policy that permitted and encouraged SSRI medications, discussed in America’s Medicated Army:

It wasn’t until November 2006 that the Pentagon set a uniform policy for all the services. But the curious thing about it was that it didn’t mention the new antidepressants. Instead, it simply barred troops from taking older drugs, including ‘lithium, anticonvulsants and antipsychotics.’ The goal, a participant in crafting the policy said, was to give SSRIs a ‘green light’ without saying so. Last July, a paper published by three military psychiatrists in Military Medicine, the independent journal of the Association of Military Surgeons of the United States, urged military doctors headed for Afghanistan and Iraq to ‘request a considerable quantity of the SSRI they are most comfortable prescribing’ for the ‘treatment of new-onset depressive disorders’ once in the war zones. The medications, the doctors concluded, help to ‘conserve the fighting strength,’ the motto of the Army Medical Corps.

Military members are at risk of cascading prescriptions due to treatment from numerous doctors over their careers. They are not likely to have one primary doctor reviewing their medical file for drug interaction or cumulative effect. Veterans are especially at risk of cascading prescriptions because as people get older, they become more sensitive to drugs. This is because medications stay in the body longer due to less muscle tissue and the liver and kidney do not process medications as effectively so medications become more concentrated.

Our findings suggest that stimulants may be a contributing factor for incident PTSD.

Risks of Stimulants in PTSD

Prescription Stimulants and PTSD Among U.S. Military Service Members reported the risk of PTSD was significantly higher in military personnel who were prescribed stimulants than those who did not. The risk of PTSD was significantly higher as the number of prescription stimulants increased and the cumulative days of use increased. Among 25,971 military personnel, with ‘incident PTSD’ defined as those who did not have a history of PTSD at baseline and developed new-onset PTSD, stimulants contribute to new-onset PTSD:

We found an association between prescription stimulant use and incident PTSD. Even though only a small percentage of our sample were prescribed stimulants, our findings suggest that stimulants may be a contributing factor for incident PTSD. The use of stimulants is known to increase norepinephrine levels in the brain and previous research has demonstrated that increased noradrenergic levels at the time of a traumatic event create more vivid, long-lasting memories and fear of the event, which increase the risk of developing PTSD (Debiec et al., 2011).

Blanchfield Army Community Hospital (BACH) Polypharmacy Clinic reports: “The increased use of central nervous system depressants (CNSD) and psychotropics are one of the many factors that contribute to suicidal behavior in soldiers.” Fort Campbell reported polypharmacy (chronic use of 5 or more drugs) ranged from 2.2% to 7.6% of soldiers for each brigade, after screening out soldiers using polypharmacy short-term for surgery medications:

895 soldiers were potentially saved from polypharmacy adverse reactions. Despite the Office of the Surgeon General directing this unprecedented polypharmacy screening pilot program at Fort Campbell, the extent to which this successful program was adopted by all military duty stations or continued beyond 2013 is unknown. The 2018 VA Office of Mental Health and Suicide Prevention Guidebook does not list polypharmacy screening as an intervention. The VA only targets one prescription drug, opioids, in the Substance Abuse Disorder program. The VA assisted 10,500 veterans in 2017 with opioid substitution.

The Army’s Health Promotion, Risk Reduction, and Suicide Prevention Report (2010) reports that 14% of the force is taking an opiate medication, often in addition to prescriptions for depression and anxiety. Research of pain medication and PTSD has found “Those with PTSD had significantly higher use of analgesic medication (both opiate and non-opiate), as compared with non-PTSD patients. PTSD symptoms, as measured by the Posttraumatic Symptom Scale, were significantly higher in subjects who were prescribed analgesics.”  Among veterans, suicide rates were highest in VHA patients diagnosed with opioid use disorder.

Physical Health as a Signal

48% of active duty soldiers had visited a Medical Treatment Facility in the 90 days prior to death for general health, not mental health and not substance abuse. Physical health deteriorates with PTSD and should be included as a signal for suicide risk screening. [Link to PDF -See the full report for research details.]

In conclusion, Military personnel are routinely prescribed numerous medications with Black Box warnings for suicidal ideation, mania, psychosis, violent behavior, delusions, hallucinations, and psychotic behaviors. Many of these drugs are addictive and prescribed without a plan to wean off dependency. Instead the needed therapeutic dose will increase over time. New soldiers anecdotally report being prescribed medications for the expected stress of Basic Training, which will begin the cascading prescriptions for deployment induced trauma and pain from injuries, and will cumulate with additional prescriptions later, for deteriorating physical health associated with unresolved PTSD symptoms. The total pharmaceutical load on the modern US soldier will continue to result in over 6,000 veteran suicides per year until polypharmacy screening and mitigation is implemented and prioritized at every Veterans Health Administration program.

[CHD Note: In Part 2 of this series, Pam Long will detail various treatments for PTSD, both how current treatments are working and risks of service inherent in the current medication-heavy approach. View the full report with citations and research details.]

Pam Long is a graduate of the United States Military Academy at West Point, a US Army Veteran of the Medical Service Corps, and a Board Certified Behavior Analyst.