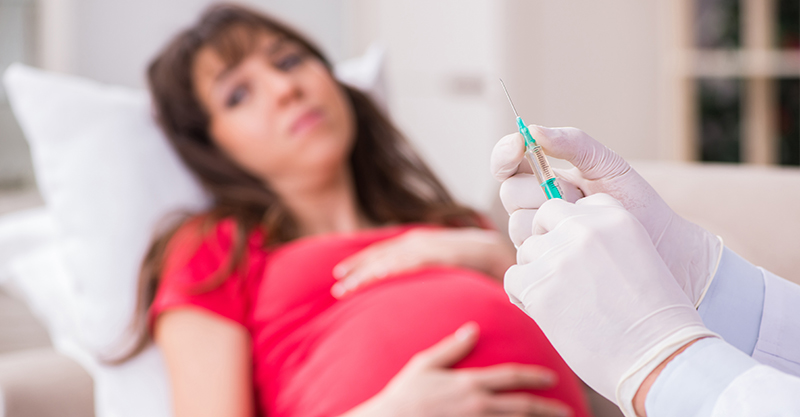 … and For Some Outcomes Infants of Unvaccinated Moms Fared Better

Public health officials and doctors, ever more insistent that pregnant women get flu shots, are frustrated that fewer than four in ten American moms-to-be avail themselves of the recommendation. Policy-makers’ disappointment stems not just from their zeal to achieve the Healthy People 2020 goal of 80% coverage of pregnant women but also from their recognition that women who go along with vaccine recommendations during pregnancy are more acquiescent about vaccinating their newborn infants as well.

In their surprisingly frank conclusions, not only do the researchers report that influenza vaccination during pregnancy was ineffective in lowering risk for the four outcomes, but—ever so cautiously—they also note that the vaccinated infants fared worse.

Yet maternal worries about vaccine-related harm to the fetus are widespread and operate as a principal barrier to higher pregnancy vaccine uptake. Envisioning a day when “even more vaccines” will be added to the maternal vaccine schedule, researchers are studying how to improve uptake and design more persuasive “communication interventions.” Their messaging generally emphasizes a twofold rationale for prenatal flu shots. The first and primary stated aim is to prevent influenza in mothers and babies—but researchers also assert that by preventing such infections, they may be able to prevent unwanted fetal outcomes thought to be linked to influenza infection during pregnancy.

A research team out of South Africa has just published a paper examining the second rationale, comparing four outcomes—fetal death, low birth weight, small for gestational age birth and preterm birth—for infants whose mothers received flu shots or a placebo. In their surprisingly frank conclusions, not only do the researchers report that influenza vaccination during pregnancy was ineffective in lowering risk for the four outcomes, but—ever so cautiously—they also note that the vaccinated infants fared worse.

Unexpectedly (to the researchers), they also found that the average gestational age at birth was lower in the vaccinated versus placebo group—a statistically significant result indicative of a greater risk of preterm birth.

The 2011–2012 South Africa study was one of three large double-blind, randomized, placebo-controlled trials of influenza vaccination during pregnancy funded by the Bill & Melinda Gates Foundation (BMGF). As originally described in 2014 in the New England Journal of Medicine, over 2,000 mothers received either trivalent inactivated influenza vaccines or placebo between 20 and 36 weeks of pregnancy—in other words, in their second or third (but not first) trimester of pregnancy. (In the U.S., which encourages flu shots during any trimester of pregnancy, studies have identified a heightened risk of autism in the children of women vaccinated during the first trimester.) The researchers followed up on fetal outcomes when the infants reached 24 weeks of age.

Overall, the investigators found “no significant vaccine efficacy” with respect to any of the fetal outcomes. Unexpectedly (to the researchers), they also found that the average gestational age at birth was lower in the vaccinated versus placebo group—a statistically significant result indicative of a greater risk of preterm birth.

Of note, the study used an inert saline placebo. This is unusual in the context of vaccine clinical trials, which nearly always compare one group that receives the vaccine of interest against another group that receives a different vaccine (called an “active comparator”). The use of active comparators can “increase the occurrence of harms in the comparator groups and thereby [mask] harms caused by the…vaccines” being studied. In contrast, an inert placebo enhances the likelihood of detecting differences between groups, if any are present.

Overall, the investigators found “no significant vaccine efficacy” with respect to any of the fetal outcomes. Unexpectedly (to the researchers), they also found that the average gestational age at birth was lower in the vaccinated versus placebo group—a statistically significant result indicative of a greater risk of preterm birth. Although most of the study’s other findings did not attain statistical significance, the pattern of results showed, in another writer’s words, tendencies that were “not reassuring.” Across all analyses, the percentages and rates of fetal death, preterm birth, low birth weight and small for gestational age birth were higher in the vaccine group than in the placebo group. Couching their conclusions with caveats, the authors explain:

[W]e found a slight, though non-significant decrease in the birth weight of infants in the vaccinated group…as well as a non-significant increase in fetal deaths among [influenza]-vaccinated mothers. […] We point this out only as a cautionary word and suggest this observation be explored carefully in larger studies of vaccine safety data bases.

… maternal hospitalizations for infections were “numerically higher” in the vaccinated group, as were severe neonatal infections.

In 2017, researchers who carried out a systematic review found that “comparative studies of adverse birth outcomes following maternal influenza disease are limited in quantity and have produced inconsistent findings.” In a 2019 paper, an Italian researcher agrees, arguing that it is inappropriate to recommend across-the-board influenza vaccination of all pregnant women in the absence of “strong and consistent” randomized clinical trial evidence—particularly if one also acknowledges that current evidence often exhibits bias. Making specific reference to the South Africa clinical trial, the author notes that the trial “was funded by BMGF and by public sponsors, with the principal investigator in financial relationships with the vaccine producer, and two authors with other influenza vaccine producers.”

The author describes other results from the South Africa trial that, while again not attaining statistical significance, “were not in the expected/hoped direction.” For example, maternal hospitalizations for infections were “numerically higher” in the vaccinated group, as were severe neonatal infections. Overall, the trial produced only “18 less influenza illnesses in vaccinated mothers and their children, to be weighted…against 9 more maternal hospitalization for any infection and 6 more neonatal hospitalization due to sepsis within 28 days of birth.”

A 2013 study that evaluated adverse pregnancy outcomes following influenza vaccination of pregnant women found that “low-risk” women (that is, women without medical complications or co-morbidity) who received the vaccine during the 2009–2011 influenza seasons had an increase in a composite measure of adverse outcomes (miscarriage, fetal demise, preterm birth and neonatal demise) compared to unvaccinated pregnant women—“even after adjusting for confounding factors.” Reluctant to accept the implications of their findings, the authors stated, “We do not believe that influenza vaccination causes adverse pregnancy outcomes in low-risk women; instead our findings likely represent the result of selection bias and residual confounding.”

The same kind of avoidance was apparent in a study that investigated risks for preterm delivery and birth defects following influenza vaccination in three consecutive seasons beginning in 2011. Although the researchers found that women in the vaccinated group had a shorter gestational duration and their infants had an elevated risk of a rare abdominal wall defect called omphalocele, the investigators concluded that their results were “generally reassuring” and that “[t]he few risks that were observed are compatible with chance.”

… no vaccines have ever been approved by the Food and Drug Administration (FDA) specifically for use during pregnancy to protect the infant.

Researchers have speculated that influenza infection during pregnancy could be associated with adverse birth outcomes due to “mechanisms such as maternal fever and inflammation,” and they note that “[i]mmunological responses, such as elevated pro-inflammatory cytokine levels…are recognised as an important pathway to preterm birth.” What they generally do not acknowledge is that prenatal vaccination also introduces immune activation risks—and these risks remain scandalously understudied. Instead of bemoaning pregnant women’s “suboptimal” flu shot uptake—or dismissing the risks to a developing fetus from vaccinating the mother during pregnancy as “theoretical”—researchers and policy-makers should be putting their poorly supported pregnancy vaccination recommendations on hold. And members of the public should remember that no vaccines have ever been approved by the Food and Drug Administration (FDA) “specifically for use during pregnancy to protect the infant.”