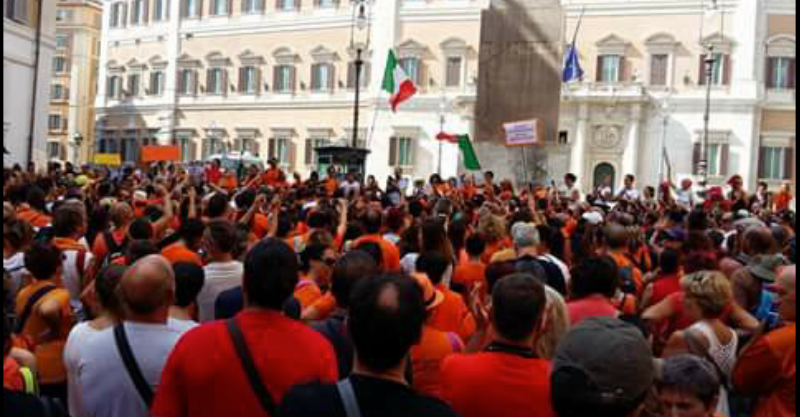 Turning their backs on the human rights principle of voluntary informed consent memorialized in the Nuremberg Code after World War II, health authorities in France and Italy are fast-tracking involuntary vaccine mandates for school-age children. In Italy, millions of Italians have been demonstrating since June, protesting the infringements to parental rights. On July 28, industry-beholden Italian legislators voted 296-92 to pass a one-size-fits-all law that mandates multiple doses of ten vaccines for preschoolers through teenagers, imposing steep fines for parents who do not comply. Mainstream media outlets in both Italy and the US ignored the record protests against medical coercion.

Vaccines are big business, and the new vaccine mandate ensures the continued flow of profits to the $32 billion industry despite steady erosion of public confidence in vaccine safety.

Why Italy? And why now? Italy’s pharmaceutical sector is one of the largest in the world. Vaccines are big business, and the new vaccine mandate ensures the continued flow of profits to the $32 billion industry despite steady erosion of public confidence in vaccine safety. A recent survey found widespread doubts among Italian and French citizens about the importance and safety of vaccines. A cascade of recent scientific studies have described the emergence of new vaccine-related autoimmune illnesses and the inferior health status of vaccinated compared to unvaccinated children. Furthermore, a slate of films, news reports and government investigations have exposed widespread corruption among vaccine regulators, government efforts to hide serious vaccine-related adverse reactions and intimidation of scientists who publish data contrary to the orthodoxy that all vaccines are always safe for all children.

One important study, published in early 2017 in the International Journal of Vaccines and Vaccination by two highly regarded Italian scientists, raises alarming new questions about quality control by vaccine manufacturers with implications for the vaccine safety debate. (The Children’s Health Defense previously summarized the study here.) Coauthored by physicist Antonietta Gatti and pharmacist Stefano Montanari, the study uncovered the nearly universal presence in vaccines of “micro-, sub-micro- and nanosized inorganic foreign bodies” and “debris”—ingredients not declared in the package inserts.

In every human vaccine, Gatti and Montanari found wide-ranging contamination, including minute particles of lead or stainless steel in all of the vaccine samples analyzed; chromium in over half (25/44); tungsten in almost a fifth (8/44); and many other varieties of metallic particles.

In a reasonable world, the startling finding that vaccines are widely contaminated with heavy metal particulates would be front-page news, and the two researchers who discovered the contamination would be hailed as diligent scientists dedicated to improving vaccine safety. Instead, Drs. Gatti and Montanari have become targets for violent threats on Facebook. Accusers denounce their meticulous laboratory work as “pseudoscience” and call for the two scientists to be “beaten until they bleed,” “punched,” “kicked” and “taken out of commission” so as to make them “understand that they need to remain silent.”

An army of pharmaceutical industry trolls and bloggers have pressured the badly shaken journal editor to “unpublish” the study, which was published after a rigorous peer review process. Although these tactics have succeeded in rattling the editor, the article stands. Gatti and Montanari believe so strongly in the integrity of their findings that they have made known that they will sue if the journal takes down the paper.

Despite the passion of their attacks, industry bloggers have been hard pressed to find substantive fault with Gatti/Montanari’s methodologies. An industry flack, Guido Silvestri, working at a vaccine center in Atlanta, took a bungling shot at the Gatti-Montanari study on Italian Facebook by misapplying a nineteenth-century law of chemistry called Avogadro’s number. Silvestri misinterpreted Avogadro’s law, which applies only to gases and cannot calculate nanoparticle concentrations. According to Drs. Gatti and Montanari, the medical doctor “erred by 13 orders of magnitude but did not even understand his own mistake.”

Gatti and Montanari believe that the immune system is permanently damaged by these composite particles, which constitute “a bigger-sized compound that is not biodegradable and can induce adverse effects,” including both immediate and deferred autoimmune problems.

Why the Vaccine Contaminant Study is Important

Gatti and Montanari work in the emerging fields of nanopathology and nanotoxicology. The two researchers coined the term “nanopathology” in the early 2000s after finding that nanoparticles (particles less than 100 nanometers in size) “induce far more severe [health] effects” than larger particles. As they explain, the minute size makes it “extremely easy” for the particles to infiltrate the body’s tissues.

Drs. Gatti and Montanari used cutting-edge electron microscope technology to physically examine inorganic, particulate contaminants in vaccines and identify their chemical composition. They assessed 44 vaccines manufactured in Italy and France (43 human vaccines and one veterinary vaccine), taking pains to include different types, batches and years of production. In every human vaccine, Gatti and Montanari found wide-ranging contamination, including minute particles of lead or stainless steel in all of the vaccine samples analyzed; chromium in over half (25/44); tungsten in almost a fifth (8/44); and many other varieties of metallic particles.

Ironically, the single veterinary vaccine tested as “clean,” proving that it is possible to manufacture a debris-free vaccine. Gatti and Montanari believe that the pristine hog vaccine is a homage to ham, a sacred culinary and agricultural product in Italy. Hog farmers, aware that aluminum adjuvants in vaccines harm their meat, had enough clout to successfully lobby for uncontaminated veterinary vaccines.

One of the study’s most sobering findings was the detection of “organic-inorganic composites” that represent a “nano-bio-interaction” between the inorganic particulate matter and the organic (protein) vaccine components. Gatti and Montanari believe that the immune system is permanently damaged by these composite particles, which constitute “a bigger-sized compound that is not biodegradable and can induce adverse effects,” including both immediate and deferred autoimmune problems.

The Questions We Should Be Asking

Dr. Gatti has considered several hypotheses about the origins of the vaccine contamination, including shoddy line protocols in the manufacturing process. According to Gatti, “The facilities need to be really clean to ensure that dust and pollutants do not find their way into the vaccines. If the labs do not have proper filtration, then this kind of contamination is very possible. And unfortunately, there are no regulations requiring manufacturers to do this kind of quality control, even though the manufacturers know that there is something wrong.” In short, the manufacturers “see no need to spend more money on quality control.”

Gatti and Montanari see an urgent need for more studies of the association between the debris and vaccine-related adverse events. “We still don’t know whether the kinds of adverse events that result from vaccines are the result of the aluminum adjuvants or the nano-bio interactions or something else. That is why it is so important to study the effects of the nano-bio materials inside the blood and body.”

Exposure via injection is known to induce toxicity reactions as compared to inhalation or ingestion. A study in mice found that exposure route was a crucial factor influencing toxicity and that orally administered compounds exhibited a “decrease of toxicity…as compared with injection route.” Scientists agree that “engineered metal-based nanoparticles can translocate to tissues,” and, in Gatti’s and Montanari’s view, when they enter the body via injection, “they stay there forever.”

Another point is that the barrage of toxic adjuvants and ingredients in vaccines (including aluminum and thimerosal, formaldehyde, antibiotics and “adjuvant systems” involving squalene and polysorbate 80) “have a synergistic action, thus…enhancing their aggressive potential.” Toxicologists know that, with toxins, one plus one rarely equals two but, in Dr. Gatti’s words, “always a higher number.”

Finally, Dr. Gatti observes that “the contaminants might not be homogenously distributed within a given batch of vaccines. For example, the bottom of the batch might be more contaminated than the top, which could explain why some people don’t have reactions and other people do.”

Drs. Gatti and Montanari outline a number of research topics that should form the basis of serious efforts to improve vaccine safety:

…the barrage of toxic adjuvants and ingredients in vaccines (including aluminum and thimerosal, formaldehyde, antibiotics and “adjuvant systems” involving squalene and polysorbate 80) “have a synergistic action, thus. . .enhancing their aggressive potential.”

Unfortunately, in Italy, as in the United States, serious studies of vaccine safety face practically insurmountable headwinds. Italy’s Minister of Health, Beatrice Lorenzin, has explicitly “forbidden” any research on nanoparticles in vaccines. Lorenzin aggressively pushed passage of the law mandating children’s vaccines. Lorenzin, a former journalist, has no formal education beyond ordinary high school. Gatti and Montanari point out that she has “no knowledge of chemistry or biology.” They add, “If you mention the nanoparticle research to her, she gets mad.” According to the two researchers, Lorenzin “does not understand science, but she understands money” and relies for guidance on Dr. Ranieri Guerra, the Ministry of Health’s Director General for Prevention. Guerra served on the board of Italy’s Smith Kline Foundation. The Smith Kline Foundation receives financial support from founding partner GlaxoSmithKline (GSK). Consumer advocacy organizations and legislators in Italy have harshly criticized Guerra for conflicts of interest.

A year before the passage of the new vaccine mandate, an April 2016 news report indicated that GSK-Italy was “doubling down” on its vaccine portfolio and “betting 1 billion euros on Italy.” The drug company is beefing up a vaccine research and development hub in Siena and a vaccine manufacturing plant in Rosia. The article quoted the global president of GSK Vaccines, who characterized GSK’s vaccine branch as a “motor of innovation” and guarantor of the company’s long-term sustainability. The same GSK executive described Italy’s pivotal role as a vaccine research and production hub as “a not insignificant step” toward further “progress” in the vaccine marketplace.

Italian officials have historically been important supporters of aggressive vaccine policies. In 2009–2010, the Italian government (via the taxpayers) purchased 24 million bird flu vaccines that were never used. The unused vaccines were thrown away but, says Dr. Montanari, “the companies made a lot of money.” Referring to this situation as a “flop,” the Italian newspaper La Repubblica reported that the country was left holding the bag for the cost of the unused vaccines while the apparent “pandemic” evaporated into thin air.

Dr. Montanari views the new vaccine law as both a social and medical experiment: “The government and the pharmaceutical industry want to see what happens when 60 million people are forced to be vaccinated.” 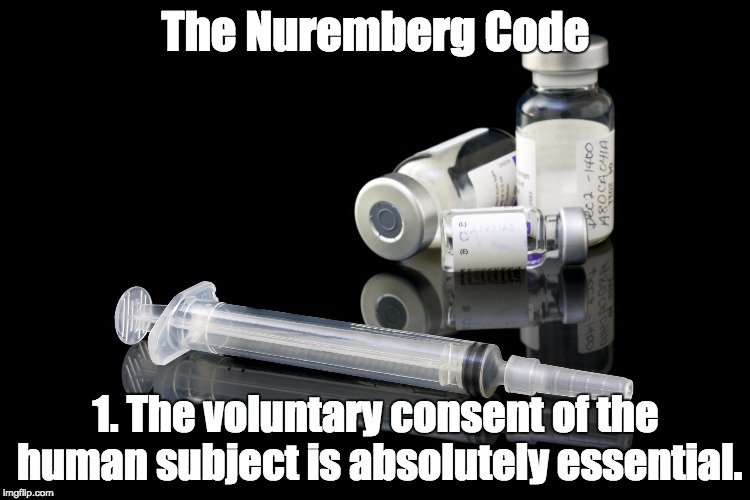