Declining IQ: A Race to the Bottom? 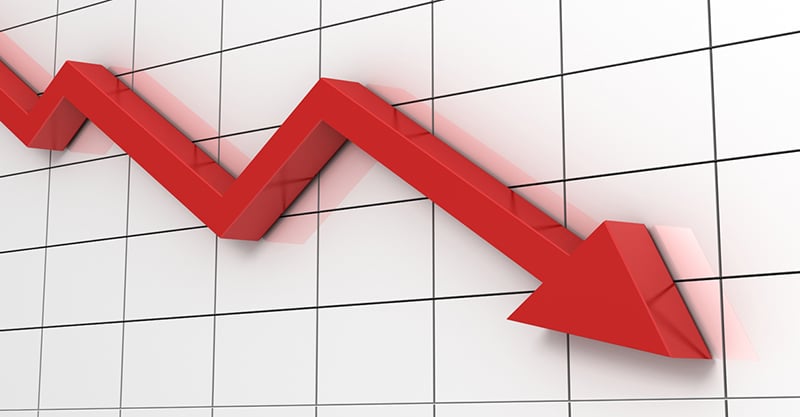 In the U.S., plummeting SAT scores are one proxy indicator of cognitive fallout; the scores have been falling for over a decade and are at historically low levels, reflecting an across-the-board worsening in critical reading, math and writing performance. A report in 2013 suggested that almost three-fifths (57%) of graduating high school seniors were not ready for college. And a new study that reports “large changes in average cohort intelligence” in recent years has the answer—the turnaround in IQ is due to environmental factors.

Over the past several decades, American children’s physical and mental well-being has steadily deteriorated. Over half (54%) of all U.S. children (as of 2007) had a chronic health condition—with developmental and behavioral problems, obesity, allergies, asthma and mental health conditions leading the pack—and the prevalence of many of these conditions doubled from 1988 to the mid-2000s. Federal reporting on pediatric health indicators in 2017 showed that one in five children (kindergarteners through adolescents) were obese, one in ten had activity limitations resulting from chronic health problems, and one in seventeen (more males than females) had, according to a parent, “serious difficulties with emotions, concentration, behavior or getting along with other people.” In addition, 12% of adolescents suffered a major depressive episode in the previous year, with the prevalence of teenage depression rising continuously since 2004 and suicide representing the second leading cause of death for both teens and young adults.

A converging body of evidence calls attention to a consistent decline in basic cognitive abilities and ‘mental speed,’ particularly in young males, beginning in the mid-to-late 1990s. 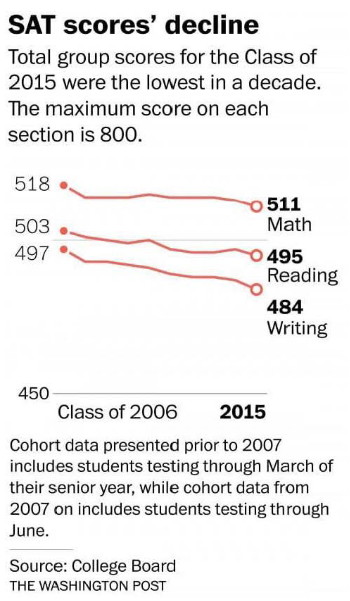 Mild and serious developmental disabilities are one of the most prominent faces of the health crisis affecting American children (and, increasingly, children in other countries as well). These disabilities have obvious and sobering implications for individual children’s learning trajectories and future cognitive achievements—but also for society as a whole. In the U.S., plummeting SAT scores are one proxy indicator of the cognitive fallout; the scores have been falling for over a decade and are at historically low levels, reflecting an across-the-board worsening in critical reading, math and writing performance. A news report in 2013 suggested that almost three-fifths (57%) of graduating high school seniors were not ready for college.

In Europe, researchers have been systematically assembling other types of cognitive data to examine intelligence quotient (IQ) trends over time. A converging body of evidence calls attention to a consistent decline in basic cognitive abilities and “mental speed,” particularly in young males, beginning in the mid-to-late 1990s. An article in the British popular press noted the falling IQ scores in 2014 and pointedly asked, “Are we becoming more STUPID?” Ignoring the belligerent tone of the journalist’s question, it seems logical to follow up with another question: what is causing the decline in measured intelligence? A new study that reports “large changes in average cohort intelligence” in recent years has the answer—the turnaround in IQ is due to environmental factors.

A new study that reports ‘large changes in average cohort intelligence’ in recent years has the answer—the turnaround in IQ is due to environmental factors.

In the mid-1980s, a New Zealand professor named James Flynn reported that Americans’ IQs rose by approximately three points per decade from the 1930s through the 1970s. This rise in standardized intelligence test scores—documented year after year and decade after decade in numerous countries—has come to be known as the Flynn effect. Since the early 2000s, however,  researchers in Scandinavia and Western Europe have been publishing accounts of a “negative” Flynn effect—or a Flynn effect “gone into reverse.” Five of the studies are worth summarizing due to their striking timeline similarities. (Note: Because short-term military service is compulsory for young able-bodied men in many of these countries, some researchers have taken advantage of data from cognitive tests administered to prospective conscripts.)

Norway: A 2004 study reviewed “general ability” (which included measures of language and math) in male conscripts tested from the mid-1950s to 2002. Following substantial gains over the first three decades, the gain rate began decreasing and then came to “a complete stop from the mid-1990s.”

Denmark: A Danish assessment in 2008 of 18-year-old males appearing before the draft board described falling cognitive test scores from 1998 to 2004, with the abrupt decline representing a loss of about 1.5 IQ points. This pattern held true in young men planning to pursue higher education and in those not continuing their education.

United Kingdom: In a British study published in 2009, the investigators compared test results for 13- and 14-year-olds in 2006-2007 with data collected from the same age group in 1976. The researchers discovered a “narrowing” in the young people’s range of performance, with “far fewer go[ing] on to develop the interpretative and evaluative level of thinking characteristic of formal operations” [emphasis in original]. (The researchers are referring to Piaget’s theory that describes a formal operational stage of cognitive development from about age 12 that allows adolescents “do mathematical calculations, think creatively, use abstract reasoning, and imagine the outcome of particular actions.”)

Austria and Germany: A 2015 meta-analysis of dozens of studies involving over 13,000 subjects from schools, universities and the general population (with an average age of 22 years) pulled together data collected from the late 1970s until 2014. Examining one domain of IQ (spatial perception), the researchers documented a “robust” pattern of “initial increases, followed by stagnation (with performance peaking around the mid-1990s), and subsequent decreases of task performance.”

It goes without saying that these general population studies of intelligence trends do not begin to capture the tragic circumstances of children with specific intellectual disabilities such as, in some cases, autism spectrum disorder (ASD) or fragile X syndrome (FXS). A recent study by neuroscientists at the University of California-Davis rhetorically posed the parental question, “What will my child’s future hold?” After assessing the IQs of children with ASD at ages two and eight, the Davis researchers found that IQ declined in about 25% of the children over the six years. Studies of children with FXS also have shown that IQ may decline over a relatively short period of time.

And the possible causes of falling IQ are…

Although researchers have speculated on possible contributors to the disquieting IQ trends, few have come up with any meaningful answers. The puzzled investigators of the 2008 Danish study stated, “the declines…seem to be real,” but “it is not easy to account for them.” Another group of authors vaguely discussed four causes ranging from the “cultural-environmental,” to statistical, biological or “hybrid” explanations.

In addition to prevalent toxins such as flame-retardant chemicals, heavy metals such as mercury and aluminum represent another category with documented detrimental effects on intelligence.

There is another far more concrete possibility, which is the impact of environmental toxins on IQ. In addition to prevalent toxins such as PBDEs (flame-retardant chemicals), heavy metals such as mercury and aluminum represent a category with documented detrimental effects on intelligence. Vaccines are one of the most widespread and ongoing sources of prenatal and childhood exposure to these metals. Prenatal exposure—as occurs with the mercury-containing flu shots and aluminum-containing pertussis vaccines now routinely administered to pregnant women—is particularly dangerous as early exposure can impair subsequent growth and development of neurons. The U.S. requires the largest number of vaccines for school entry of any developed nation, although compulsory vaccination has been trending upward in Europe as well.

Childhood brain disorders can have subclinical effects at the individual level that translate into large population-level effects.

Childhood brain disorders can have subclinical effects at the individual level that translate into large population-level effects. Harvard researcher David Bellinger believes (as quoted previously by Children’s Health Defense) that “Even a modest impact that does not push a child’s neurodevelopment into the range of clinical concern cannot be dismissed as benign because, if the exposure is prevalent, the total number of IQ points lost in the population as a whole might be large, and the reduction in the intellectual resources available to a society substantial.” Researchers already are openly expressing concern about the potential for a mismatch between available cognitive abilities and “the expected larger demand for non-routine analytical-cognitive jobs,” noting that “cognitive tasks at the workplace as well as in daily life and in organization, maintenance and especially innovation are rising.” Predictions that the U.S. is “on the decline” may come true unless decisive action is taken to ensure safe vaccines and eliminate children’s cradle-to-adulthood exposure to the intelligence-harming toxins contained in vaccines.