Bill Gates, are vaccines a “miracle” over disease and a “fantastic investment”… 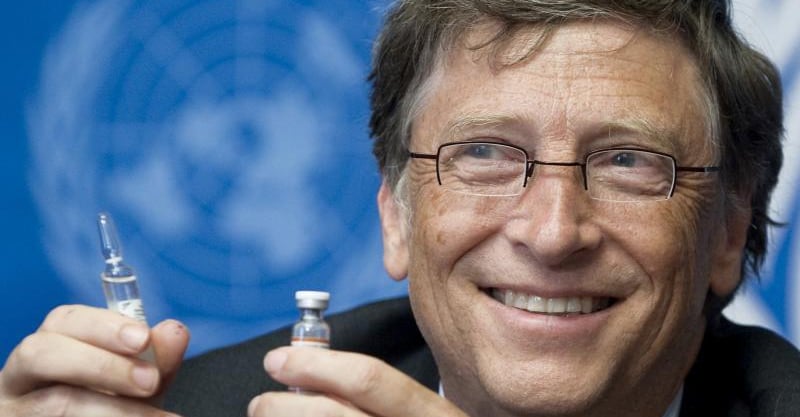 — or a disaster for child health that may break the bank?

Bill Gates is fond of using his bully pulpit to talk about “miracles” and “magic.” Gates has featured one or both words in nearly all of his annual wrap-up letters for the Bill & Melinda Gates Foundation (2009, 2010, 2011, 2012, 2014, 2016 and 2017), most often in reference to the Gates Foundation’s outsized financial and ideological support for global vaccine programs. As Gates says, “In the same way that during my Microsoft career I talked about the magic of software, I now spend my time talking about the magic of vaccines.”

Gates’s words give us an immediate clue that he is engaging in his own brand of magical thinking—which social scientists define as “illogical causal reasoning.” How else to explain his simplistic endorsement of vaccines as a miraculous intervention with unmitigated benefits and no down side? The Gates Foundation’s global spreadsheet appears to have no room to tally the massive flood of vaccine injuries afflicting children worldwide, despite abundant evidence that this damage is standing the vaccine risk-benefit calculus on its head and turning childhood into an extended round of Russian roulette.

In a widely cited 2014 blog post on the “miracle of vaccines,” Gates expressed enthusiasm about the “inspiring” data on vaccines and the “fantastic” and “phenomenal” progress being made to expand vaccine coverage. There is one major problem with Gates’ professed reliance on “data,” which is that the philanthropist ignores fundamental historical facts governing infectious disease and vaccine timelines.

There is one major problem with Gates’ professed reliance on “data,” which is that the philanthropist ignores fundamental historical facts governing infectious disease and vaccine timelines.

Vital statistics data reveal that in the U.S. and elsewhere, fatalities from diseases such as scarlet fever—in the absence of any vaccine—had become quite rare by the mid-20th century. Mortality from infectious diseases such as measles and whooping cough (pertussis) also had declined rapidly, well before the introduction of the corresponding vaccines (see Figure 1). A meticulous review of U.S. mortality data from 1900–1973 concluded:

“Medical measures [such as vaccines] contributed little to the overall decline in mortality in the United States since about 1900—having in many instances been introduced several decades after a marked decline had already set in.”

The same researchers, in another article, chastised the medical establishment for its misplaced confidence in “magic bullets” (there is that word “magic” again!). Instead, if the decline in infectious disease incidence and mortality in the last century represented any kind of “miracle,” the phenomenon was, by all honest accounts, attributable to classic and long-term public health measures such as better sanitation and, especially, improved nutrition. A study of 20th-century mortality trends in Italy found a significant association between increased caloric intake and declining mortality, reflecting “progress in average nutritional status, lifestyle quality, socioeconomic level and hygienic conditions.” Moreover, mortality dropped most sharply in Italy’s youngest age groups—who were “probably the most sensible to the changes in nutrition and wellness.” Even early 20th-century epidemiologists who were inclined to give some credit to vaccines recognized that other factors were at play, including changes in “human resistance and bacterial quality” as well as factors yet to be determined. 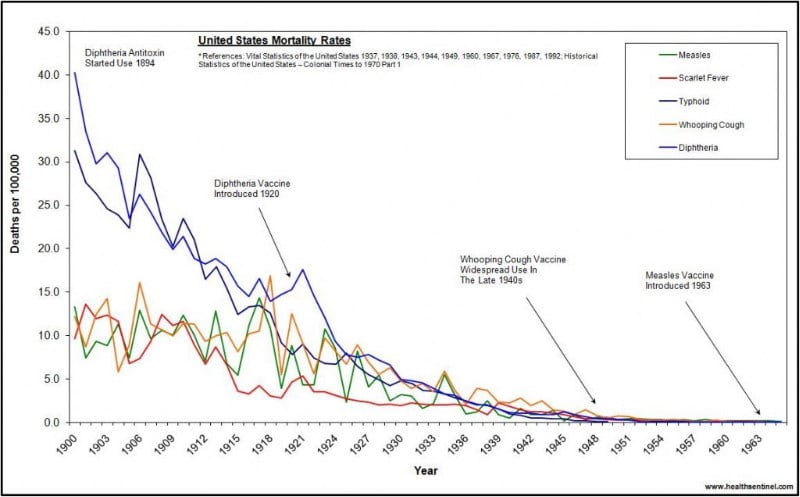 Source: Data compiled from the National Office of Statistics.

Oh miracle, where art thou?

Even if one leaves 20th-century vital statistics behind, there is a glaring piece of evidence that gives the lie to Bill Gates’ disingenuous assertions about vaccine miracles: vaccines are not actually making or keeping children healthy. Instead, in the U.S. (where children are the most highly vaccinated in the world), over half of all young people have a chronic illness—a trend that coincides with the expansion of the nation’s vaccine schedule. Similar patterns of chronic illness are emerging worldwide, including for potentially life-threatening conditions such as food allergies and asthma.

…there is a glaring piece of evidence that gives the lie to Bill Gates’ disingenuous assertions about vaccine miracles: vaccines are not actually making or keeping children healthy.

The Children’s Health Defense’s Campaign to Restore Child Health has been documenting parents’ first-hand accounts of serious adverse outcomes experienced by their children following vaccination. These testimonials, which represent the tip of the iceberg, cover a panoply of disorders that were rare or even unheard of a few decades ago:

…large foundations such as the Bill & Melinda Gates Foundation exert influence not just through their “enormous resources” but also “by shaping development concepts and policies.”

A recent German report on global philanthropy observes that modern philanthropy has its roots, first and foremost, in business tycoons’ self-interested desire to shield income from taxation while “garner[ing] prestige and influence in the U.S. and world affairs.” The report’s authors note that large foundations such as the Bill & Melinda Gates Foundation exert influence not just through their “enormous resources” but also “by shaping development concepts and policies.” The Gates Foundation—established in 2000 with an initial endowment of $42.9 billion and amplified by an additional $30 billion from Warren Buffet in 2006—has become the world’s leading global health player as well as the largest non-state funder of the World Health Organization (WHO). As a result of the Gates Foundation’s “tremendous agenda-setting power,” the global health community designated 2010–2020 as the Decade of Vaccines; developed a Global Vaccine Action Plan; and created the public-private Global Alliance for Vaccines and Immunization (GAVI Alliance), which receives almost one-fourth of its funding from the Gates Foundation.

While Gates has rhapsodized that vaccines are a fantastic investment, the vaccine industry, in fact, is a primary beneficiary of Gates Foundation largesse. According to the German analysts, for example, the Gates Foundation’s support of the GAVI Alliance has incentivized manufacturers to increase production of specific vaccines. These incentives have resulted in payments of over $1 billion to Pfizer and GlaxoSmithKline (GSK). Some reporters have described this arrangement as “a leg-up for pharmaceutical companies ‘seeking to expand into faster-growing, lower-income countries.’” However, as the German report notes, the non-governmental organization Doctors without Borders (MSF) has questioned the GAVI Alliance’s overall impact on vaccine affordability, stating that “the cost to fully immunize a child was 68 times more expensive in 2014 than it was in 2001.”

The German analysts and others have outlined key features of the Gates Foundation’s close partnership with the pharmaceutical industry, including the revolving door between the staff of the Foundation and pharmaceutical companies such as Merck and GSK…

The German analysts and others have outlined key features of the Gates Foundation’s close partnership with the pharmaceutical industry, including the revolving door between the staff of the Foundation and pharmaceutical companies such as Merck and GSK; the preponderant focus of the Foundation’s largest global health awards (20/50 or 40%) on research and development of new vaccines and drugs; and the Foundation’s $52 million equity stake in CureVac (a German pharmaceutical company) to speed up development of mRNA-vaccines. The Gates Foundation also has increased its direct support for the biotechnology industry, which is of considerable relevance to the vaccine industry due to the rapidly increasing use of biotech in modern vaccine manufacturing. Recent articles have pointed out, moreover, that the Gates Foundation routinely pays public relations firms to manipulate scientific decision-making in favor of the risky genetic engineering technologies that the Foundation supports.

What these observations make apparent is that  Bill Gates’s vaccine philanthropy indeed represents a “miracle”—but the miracle’s beneficiaries are the corporations and stockholders who are laughing all the way to the bank, and certainly not the children and adults around the world who are bearing the brunt of unsafe vaccines. Dr. Arata Kochi, the WHO’s former director of malaria research, chose to call a spade a spade in 2008 when he described the Gates Foundation as a cartel that suppresses diversity of scientific opinion and is “accountable to no one other than itself.”