Learn what people are saying upon reading The Real Anthony Fauci.

[The book] makes the case that rather than a secret grab for power, a web of corruption is involved that has been polluting medical science internationally for decades, fueled by massive misuse of public funds. An unholy alliance has arisen between big state spenders, including the National Institute for Allergy and Infectious Disease (NIAID) headed by Fauci, and tax-exempt, purportedly philanthropic trusts, notably the US-based Bill and Melinda Gates Foundation and the Wellcome Foundation in the UK….Everyone with an interest in how we entered these dystopian times should read Kennedy’s book.

It is quite something when a 450-page book with more footnotes than a volume of the Encyclopedia Britannica is this spellbinding. Anthony Fauci is what Hannah Arendt termed a Schreibtischtäter or “desk killer.” I thought I already had a good sense of the harm Fauci has done as director of the National Institute of Allergy and Infectious Diseases (NIAID) since 1984. However, watching one of Kennedy’s video presentations on Fauci’s record as Kennedy was working on the book was astonishing. Just when you think you appreciate the extent of the corruption and regulatory capture of the U.S. pharmaceutical-industrial complex, you learn it is even worse.

“Dr. Joseph Goebbels wrote that ‘A lie told once remains a lie, but a lie told a thousand times becomes the truth.’ Tragically for humanity, there are many, many untruths emanating from Fauciand his minions. RFK Jr exposes the decades of lies.” 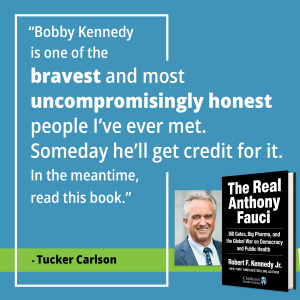 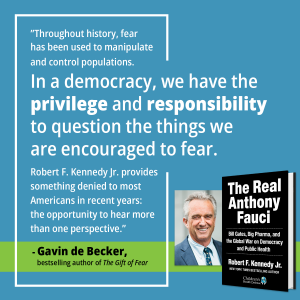 “If you’ve ever wondered why so many good scientists and doctors have been silenced for discoveries that don’t fit the mainstream Big Pharma narrative, look no further than Robert F. Kennedy Jr.’s tour de force exposé of Anthony Fauci. This book reads like a John Grisham legal thriller. Except that it is not fiction. Read it with your eyes wide open. It’s time the world woke up to the truth.” 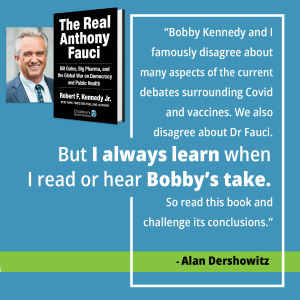 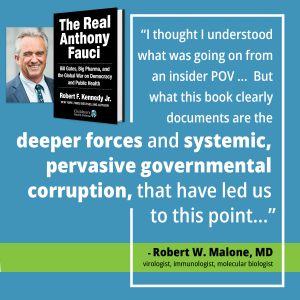 “As a trial lawyer, Robert F. Kennedy Jr. has taken on the world’s most powerful corporations and held them accountable for harming people and the environment. Those companies denied any wrongdoing—but time and again, judges and juries were persuaded that Kennedy’s position was the right one. Kennedy’s information should always be considered, and agree or disagree, we all learn from listening.” 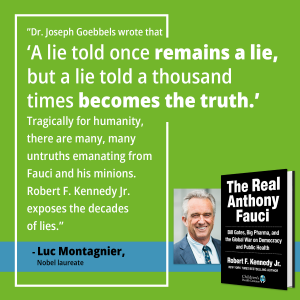 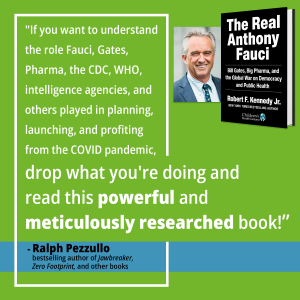 —Dr. Vandana Shiva, director of Nadvanya and author of Oneness vs. the 1% 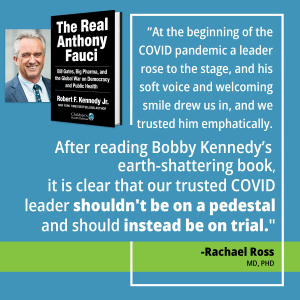 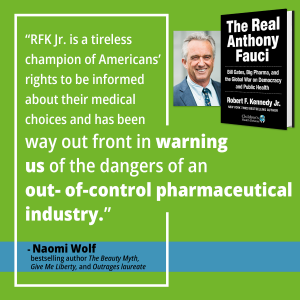 “Standing as a pivotal work for the history of science and medicine, this book unveils the astonishing, twisted truth about a man (Fauci) and a corrupt institution (NIH) that has betrayed humanity at every turn in order to achieve profits and power. If the American people knew the truth that’s documented here, they would be marching by the millions, demanding criminal prosecutions of all those who are complicit in these outrageous betrayals of humanity. RFK Jr’s book closes the loop on one of the most disastrous and truly evil schemes in the history of medicine and science. If humanity does not now demand investigations and prosecutions across this vast landscape of science fraud and pathological “authority,” we are truly beyond hope.”

—Mike Adams, a.k.a. the “Health Ranger,” founder of NaturalNews.com

“If you have any interest in doing a deep dive into the more than 100-year history of what led up to the COVID-19 pandemic, then the Real Anthony Fauci is an absolute must-read. In addition to exposing Fauci, the book reveals the complex web of connections between Gates and Big Pharma and many of the most important players that were responsible for seeking to implement global tyranny and profit enormously from the propaganda behind the COVID injections, masks, and lockdowns.”

“Who—or what—is the real Anthony Fauci? That may be the most important question facing us today, as We the People struggle to survive the lethal care of ‘America’s Doctor.’ This essential book reveals—at last!—that Dr. Fauci is, on the one hand, a severely twisted person, in his fiendish cunning, vindictiveness, and ruthlessness, a covert blend of Stalin and Iago; and yet, far more importantly, the story of Dr. Fauci’s rise and reign is really all about the absolute corruption of our major institutions—government, medicine, academia, and (above all) the press—by Big Pharma(and the Gates Foundation). Those of us who really do believe in science and democracy, now have this book to help us break his fatal spell on everybody else, and start to rid the world of that corruption.”

“As I read Bobby Kennedy Jr.’s book I thought a discreet and thorough criminal investigation into Fauci should occur. Having observed Fauci’s flip flops on his statements on the COVID pandemic, coupled with the book’s descriptions by former coworkers as ‘neither a competent manager . . . nor skilled or devoted scientist . . . with a domineering nature toward subordinates and rivals that discouraged dissent’ a foundation for an investigation exists. The conduct cited, involving the CDC’s Advisory Committee on Immunization Practices approval of a vaccine and how Fauci and his Pharma partners use their PIs to control the key FDA and CDC panels that license and ‘recommend’ new vaccines, is a red flag that warrants this investigation. The book cites an approval of a vaccine, whereby there was no testing of a vaccine against a placebo in pre-approval trials that is a standard scientific process to ‘predict’ and/or determine risks if the vaccines would avert more injuries than they would cause—and the vaccine was approved. This appears to be similar to what happened with the Covid vaccines. The Covid clinical trials were not in accordance with prescribed regulations. It brought back memories of criminal bid-rigging schemes conducted by Organized Crime in New York City. If an investigation identified intentional rampant fraud, vaccine deaths could be considered murders and the federal forfeitures would be billions of dollars.”

“State Farm Insurance advises us to do a ‘discount double check’ on our auto and homeowners insurance, and that’s good advice. Surely it’s time that we did a discount double check on Dr. Fauci. As American citizens, we are entitled to ‘informed consent’ with respect to medical decisions, and whether you agree with Kennedy or not, this book will increase your knowledge regarding Dr. Fauci and his leadership.”