A Virginia pharmacy wrongly administered COVID vaccines to 112 children under age 12, using a smaller amount of the vaccine formulated for people 12 and older. Last month, two children in Texas were given adult doses of the COVID vaccine, and in Indiana, two young children got COVID vaccines instead of flu vaccines. 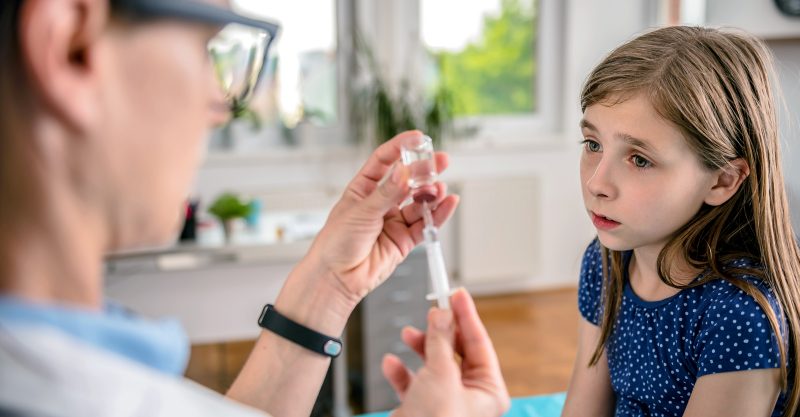 A pharmacy in Loudoun County, Virginia, was ordered to stop administering COVID vaccines after giving 112 children between the ages of 5 and 11 a smaller amount of a vaccine formulated for people 12 and older, The Washington Post reported.

“The pharmacy who administered the Pfizer COVID-19 vaccination to your child last week has been removed from both state and federal COVID-19 vaccination programs,” Loudoun County Department of Health Director David Goodfriend said in the letter to parents whose children were affected.

Ted Pharmacy administered the shots on Nov. 3 and 4.

Kids in the 5 to 11 age group are supposed to receive a two-dose, 10 microgram COVID vaccine regimen, compared to the 30 microgram shots for those 12 and older.

“Because they did not have the children’s formulation they used the adult formulation but only gave a third of the amount to the children,” Goodfriend said. “Our understanding from Ted Pharmacy is they were trying to do a workaround, which is not authorized.”

The problem with the workaround is that when the volume of vaccine given is reduced, it becomes difficult to ensure it’s the correct amount, Goodfriend said.

“If it doesn’t all go in, or if it goes into the body but doesn’t go into the muscle, or you didn’t draw it up exactly to the 0.1 milliliter line, there’s a chance you might get too little vaccine,” he said. “There’s also a chance it could have given too much.”

Dasha Hermosilla said a pharmacist gave her 7-year-old daughter a diluted dose of the vaccine for people 12 and older — which comes in a vial with a purple cap, not the orange cap on the vaccine meant for younger children, News4 reported.

Hermosilla said the “pharmacist told them it was OK,” but a Google search later confirmed her fear that it was not.

“Nothing says that you can change a purple to an orange,” Hermosilla said. “I had this pit in my stomach that, like, what did they just do to my daughter?”

Other parents were also asking questions. Another mom sent News4 a screenshot of a Facebook conversation in which the pharmacy admitted the mistake and apologized for the “inconvenience.”

“The way they have dealt with individuals is really, like, ‘Oh, it’s no big deal,'” Hermosilla said. “There are dozens and dozens of families out there that don’t even know this is an issue.”

The parents said state health officials told them the Virginia Board of Pharmacy had opened an investigation, but the agency, by law, could neither confirm nor deny an investigation was taking place, News4 reported.

Officials instructed the pharmacy to notify parents to discuss next steps — whether their children needed to restart the vaccine series or receive a second dose.

The health department told parents of affected children they should first consult with their child’s pediatrician to decide the best course of action.

In a letter sent to affected families, Goodfriend included guidance from the Centers for Disease Control and Prevention (CDC), which said kids given the wrong dose could proceed with a second dose of the correct amount in 21 days, or restart the two-shot series after 21 days, ensuring it is the correct vaccine with the orange cap, the county health department said.

Health officials also said parents should watch for vaccine side effects such as fever, chills, fatigue and pain or redness at the injection site and call their pediatrician if their child has prolonged or more serious side effects.

Health officials in Garland, Texas, are investigating how two children under the age of 12 received adult doses of a COVID vaccine.

Dorothy White, Garland’s public and media relations director, confirmed the children were both given Pfizer’s vaccine on Oct. 31, two days before the CDC approved shots for children ages 5 to 11.

The parents of one of the children told KTVT a nurse at a pop-up clinic run by the health department assured them their 6-year-old child was eligible to receive the vaccine.

“They asked us our kids’ ages, and so we told them 4 and 6, and they said ‘the 6-year-old can obviously get it if you’d like to go ahead and do that,’” Julian Gonzalez said. “Going off their confidence and what we read [on the form] we were all for it.”

Gonzalez said his child and a 7-year-old neighbor boy both got shots at the clinic. On Monday, health officials reached out to the families to inform them of the mistake.

According to the CDC, children ages 5 to 11 are supposed to receive a dose one third the size of an adult’s. The needle used to administer the vaccine to children in that age group is smaller and specially designed.

White said in a statement that Garland health officials “are in communication with the parents of the children involved, who are monitoring the children for side effects.”

White said the health department reported the incident to the state and continues to investigate the circumstances resulting in the error.

“We’re just on edge completely until we see this through,” Gonzalez said. Apart from some initial side effects, Gonzalez said his son is doing well.

As The Defender reported Oct. 15, Joshua and Alexandra Price took their 4-year-old son and 5-year-old daughter to a Walgreens in Indiana for the flu shot, but the children and parents were all mistakenly given Pfizer’s COVID vaccine.

“Walgreens called me to say there was a mix-up, we did not receive the flu shot,” said Alexandra. “And I’m like well what did we get? And he was like we got the COVID-19 shot, and instantly I was like, well what does this mean for my kids…?”

The parents said their children, Sophia and Lukas, experienced side effects from the vaccine — which was approved only for ages 12 and older. The side effects included fever, body aches, cough, headache and nausea.

The children received a dose three times higher than what was used for testing for children in clinical trials.

“[The cardiologist] said our daughter was having higher blood pressure than she would like,” said Alexandra. “And Lukas, our son was having tachycardia …”

“Their prognosis is uncertain at this point in time, and their medical treatment providers continue to monitor their conditions,” Tuley said.

“It is disturbing to note that product administered to patients of inappropriate age was filed 5,510 times in this age group,” Rose said. “Two children were inappropriately injected, presumably by a trained medical professional, and subsequently died. This is malfeasance.”