In this latest episode of “RFK Jr. The Defender Podcast,” attorney Rob Bilott discusses his role in the landmark case that exposed how DuPont poisoned a community with the toxic chemicals used to make Teflon. 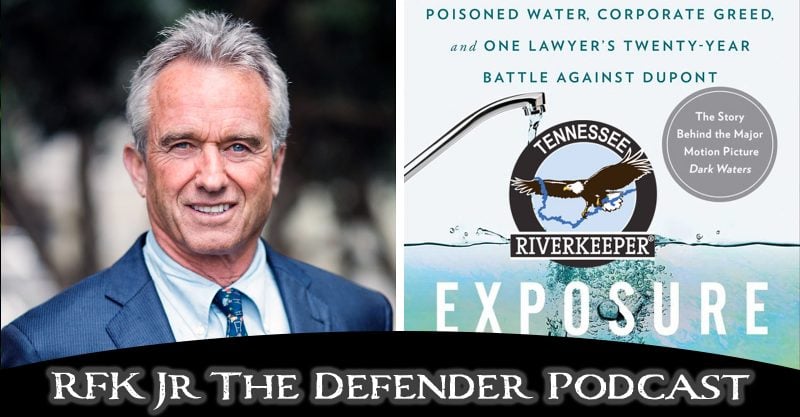 Rob Bilott was a longtime pro-corporate lawyer who represented big chemical companies — until one day he received a letter from a farmer in Parkersburg, West Virginia, whose  cows were dying.

Bilott, played by actor Mark Ruffalo in the film “Dark Waters,” took on DuPont in what would become a landmark case exposing the harm caused by perfluorooctanoic acid (PFOA) or C8, a highly toxic man-made chemical used to make Teflon.

PFOA, classified by the World Health Organization’s International Agency for Research on Cancer as “possibly carcinogenic to humans,” is best known for its use in non-stick cookware. But it’s also widely used in a variety of other consumer products, including waterproof clothing and furniture, food packaging, self-cleaning ovens, airplanes, cars and firefighting foam.

Bilbott told Children’s Health Defense Chairman Robert F. Kennedy, Jr. on the “RFK Jr The Defender Podcast” that he soon learned Parkersburg had a massive DuPont plant and the dying cows, which belonged to Wilbur Tennant, were exposed to chemicals coming from a landfill owned by DuPont.

“When you looked at these videotapes, you could see white foaming water coming out of this landfill owned by DuPont. It had the big DuPont label on the discharge pipe. You could see cows standing in the white foaming water with tumors. Their teeth were black. There were pictures of dead animals. And it wasn’t just the cows. It was the fish. It was the deer and other wildlife in the area.”

The damage C8 caused to the cows was nothing short of a horror movie. When Tennant examined his dead cows, he found deformed organs, discolored organs and stillborn calves.

And cows were not the only victims, notes Kennedy:

“DuPont had poisoned an entire community of 70,000 people and multiple water districts, and they had known for years that their PFOAs were in the water. They were in the dust that was in people’s homes. It was literally everywhere. And it was in the bodies and the blood supply. This is what they call a forever chemical. It’s caused testicular cancer, kidney cancer and a whole lot of other diseases. And DuPont knew it.”