The U.S. Supreme Court, which takes only a small number of cases each year, declined to take up the appeal of 55 families challenging the 2019 removal of New York’s vaccine religious exemption. 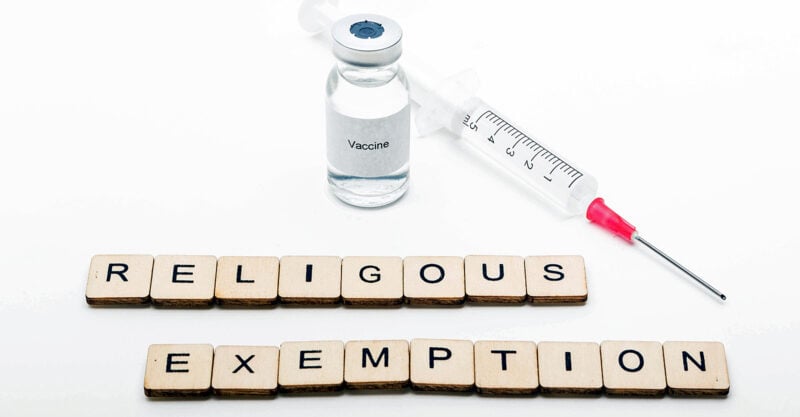 The U.S. Supreme Court this week decided not to take up an appeal by parents seeking to challenge New York lawmakers’ 2019 removal of the religious exemption to vaccination requirements for schoolchildren.

The court’s May 23 order announcing its decision not to hear arguments in the case F.F. v. New York allows a lower court decision to stand. The lower court concluded the parents’ arguments lacked merit and the state was not targeting religion when it eliminated the religious exemption.

“Today we learned that the U.S Supreme Court will not hear the religious repeal case we have argued for the last almost three years,” lead attorney Michael Sussman told Autism Action Network (AAN).

Sussman said in an AAN email to members:

“As those who have followed the case know, the legislature in NY repealed the 50-year-old religious exemption for students in June 2019. It did so with hateful rhetoric accusing religious people of being fraudsters.

“I believe this violated the first amendment which this court explicitly has held does not suffer any state action smitten with religious intolerance. I had expected this court to reaffirm this principle, but four justices did not vote to hear our case.

“So, we have lost. The only hope now is in the state legislature and hope is hard to find there.”

Every year, the Supreme Court receives about 10,000 petitions for certiorari but hears only about 80 of them. If the case pertains to state law, or is comprised of parties from only one state, the chance that the Supreme Court will hear the appeal is small.

The lawsuit originated after former Gov. Andrew Cuomo on June 13, 2019, signed into law a bill that repealed the religious vaccine exemption for children whose parents or guardians hold genuine religious beliefs that do not permit the child to receive vaccinations.

The state law applies to students under 18 in both public and private schools and prohibits unvaccinated children from attending school or daycare in the state unless they have a medical exemption.

“The science is crystal clear: Vaccines are safe, effective and the best way to keep our children safe,” Cuomo said after signing the bill. “While I understand and respect freedom of religion, our first job is to protect public health.”

The appeal stemmed from a lawsuit filed on July 10, 2019, by attorneys Sussman and Children’s Health Defense chairman and chief legal counsel Robert F. Kennedy, Jr. on behalf of 55 families in the New York State Supreme Court challenging the constitutionality of the legislature’s repeal of the religious exemption to vaccination.

The families who brought the case included those from the Jewish, Christian and Muslim faiths. They argued the repeal of the exemption violated their First Amendment rights, exhibited hostility toward religion and breached protections under the U.S. Constitution’s Equal Protection Clause, among other issues.

The families claimed the policy forced them to either violate their beliefs or homeschool their children.

“In lobbying for its passage, numerous legislators publicly mocked and ridiculed those seeking religious exemptions for their children, and the legislature left intact a medical exemption,” the parents’ brief stated.

“There is no dispute the repeal [of the religious exemption] has put tens of thousands of students to the Hobson’s choice of violating their sincerely held religious beliefs or being denied the right to attend any manner of in-person schooling.”

Sussman said there was ample evidence leading up to the passing of the bill that state legislators had shown open hospitality toward faith and people of faith.

“Comments of leaders of the New York legislature spoke of profound religious intolerance, which motivated the repeal of the religious exemptions,” Sussman told AAN.

For example, Senate Majority Leader Andrea Stewart-Cousins was quoted in a newspaper referring to the repeal by saying, “We have chosen science over rhetoric.”

Assembly sponsor Jeffrey Dinowitz said in a television interview, “There is nothing, nothing in the Jewish religion, in the Christian religion, in the Muslim religion … that suggests that you can’t get vaccinated. It is just utter garbage.”

State Sen. Brad Hoylman, Senate sponsor, deprecated those who hold religious exemptions, stating, “Let’s face it. Non-medical exemptions are essentially religious loopholes, where people often pay for a consultant to try to worm their way out of public health requirements that the rest of us are following.”

Skoufis failed to mention that neither the Senate nor the Assembly convened even a single hearing on the topic.

“Short of some cataclysmic political upheaval, there is no future for ‘religious exemption’ in New York,” John Gilmore, executive director of AAN, said in an email.

But, he said, “that does not mean there is no hope that the power of the state to make vaccinations mandatory for our children and adults cannot be taken away from our overlords in Albany.”