126 Species of Fish Contaminated With Cocktail of Big Pharma Drugs

A study in Florida found 126 species of fish contaminated with a cocktail of pharmaceuticals, including blood pressure medications, antidepressants, antibiotics and pain relievers. 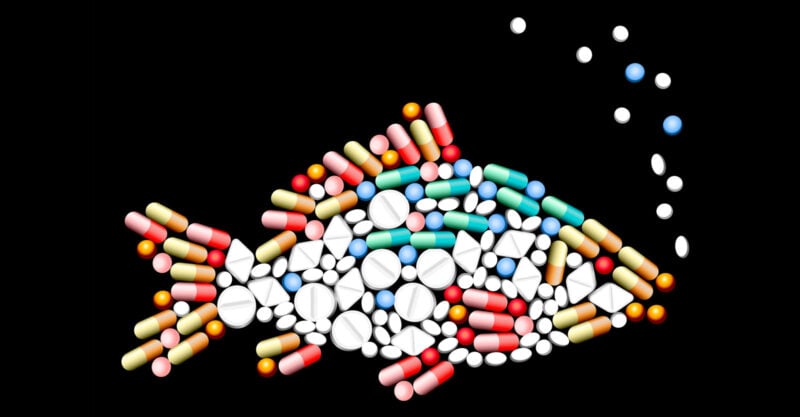 Researchers who found high levels of pharmaceuticals in the blood and tissues of bonefish believe the contamination may be contributing to the decline of not only bonefish, but also more than 125 other species that bonefish feed on.

The researchers said their findings raise concerns for Florida’s commercial fisheries and for the health of humans who eat fish.

Rehage, a coastal and fish ecologist and associate professor at FIU’s Institute of Environment and the Earth, added:

“Pharmaceuticals are an invisible threat, unlike algal blooms or turbid waters. Yet these results tell us that they are a formidable threat to our fisheries, and highlight the pressing need to address our longstanding wastewater infrastructure issues.”

Bonefish are “nicknamed ‘grey ghosts’ for their lustrous silver scales” and “remarkable stealth and speed,” according to The Guardian. They can swim up to 40 mph, and anglers come from around the world to fish for them in Florida.

But the population of bonefish off the coast of Florida has dropped 56% over the last 40 years.

One possible cause for the decline in bonefish is pharmaceutical pollution in the ocean. The “Bonefish Pharmaceutical Contaminants Study” was a three-year research project commissioned by Bonefish & Tarpon Trust, a Miami-based nonprofit. The research was conducted by FIU.

The researchers could detect up to 104 commonly prescribed pharmaceuticals, and 58 of these were found in the bonefish.

In just over half of the fish (56%), the levels of the pharmaceuticals in their system were “above which we expect negative effects,” according to the study.

Bonefish might be exposed to pharmaceuticals by inhaling contaminated water or sediment through their gills, or from the food they eat.

The researchers also studied 125 animals that bonefish eat, such as shrimp, crabs and small fish. On average, these prey species contained 11 pharmaceutical contaminants each — the same types of pharmaceuticals found in the bonefish.

This provides evidence the pharmaceuticals are bioaccumulating, meaning that toxins tend to become more concentrated in predators. It also shows contamination in other species that are important to Florida’s valuable fisheries.

The study has not yet been published. Rehage said she and her co-authors plan to submit their study to a peer-reviewed journal. The results were presented at a Bonefish & Tarpon Trust panel event held in Tallahassee, Florida, on Feb. 2.

“No legal limits exist for the control of pollution from pharmaceuticals during manufacture, use nor disposal,” according to the study.

Pharmaceutical contaminants come mainly from human wastewater and are not removed completely by conventional water treatment.

These contaminants pose a significant threat to the flats fishery, “an important part of Florida’s recreational saltwater fishery,” which has an annual economic impact of $9.2 billion and directly supports 88,500 jobs, according to McDuffie.

The problem is extensive, in both the ocean and fresh water. Pollution of the world’s rivers from pharmaceuticals poses a “threat to environmental and global health,” according to a recent study from the Global Monitoring of Pharmaceuticals Project.

The researchers took samples from 258 rivers in 104 countries on all continents. This represents the pharmaceutical fingerprint of 471.4 million people.

The study showed the presence of pharmaceutical contaminants in surface water at levels that are a threat to environmental and human health in more than a quarter of the locations.

The impact of pharmaceutical contamination on fish, humans

Pharmaceuticals remain active at low doses and exposure can affect all aspects of the life of fish, including their feeding, activity, sociability and migratory behavior.

Dr. Bob Wong, co-author of a 2021 paper about the impact of Prozac on fish behavior, said, “Pharmaceuticals are specifically designed to elicit biological effects at low concentrations, so it’s no surprise that their impact spreads to non-target species.”

Bonefish are protected by catch-and-release laws due to the decline in their numbers. However, humans do eat some of the 125 other species researchers assessed for pharmaceutical contamination.

In 56% of the bonefish sampled, the levels of the drugs detected were more than a third of the dose humans take.

What impact could high levels of pharmaceuticals in the tissues of fish have on people who eat fish? Similar to mercury contamination, this is a threat consumers can’t see, smell or taste.

What can be done?

Rachel Silverstein, director of Miami Waterkeeper, told The Guardian there are three main ways wastewater gets in the ocean: sewage spills, discharge of treated wastewater and malfunctioning septic systems.

Rehage said implementing an additional step in wastewater management, known as “ozonation,” could help. Adding ozone to the water helps remove the contaminants that are often missed by traditional wastewater treatment, including pharmaceuticals and pesticides.

According to Rehage, only Switzerland, Sweden, Germany and a few other countries have retrofitted treatment plants to incorporate this step.

Elena Fabbri, a researcher and professor at the University of Bologna in Italy, agreed that improved wastewater management is important, but argued the pharmaceutical industry itself should also take responsibility.

“We cannot ban these substances because we need them, but we could favor or push pharmaceutical industries to find greener alternatives,” she told The Guardian.