Sen. Grassley: ‘We the People Have an Absolute Right to Know Everything the U.S. Government Knows About the Origin of the Virus’

Iowa Senator Chuck Grassley said research on coronaviruses conducted at the Wuhan Institute of Virology “could have strengthened the virus to the version that caused the global pandemic.” 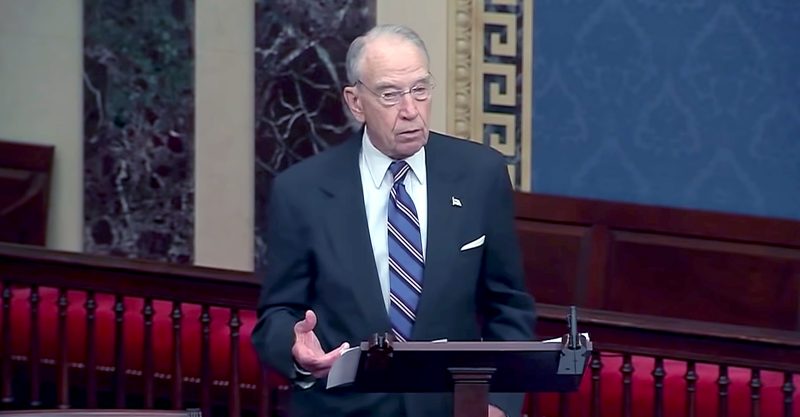 Sen. Chuck Grassley (R-Iowa) criticized Dr. Anthony Fauci on the Senate floor for mishandling taxpayer money used to fund “risky and deadly virus research” at China’s Wuhan Institute of Virology as shown in the video below.

Grassley said the focus has rightly shifted to understanding the origins of the virus.

“We the people have an absolute right to know everything the U.S. government knows about the origin of the virus.”

Grassley on May 8 wrote to the director of National Intelligence and Xavier Becerra, secretary of the U.S. Department of Health and Human Services, requesting information relating to what the government knew about the origins of COVID-19.

Grassley said he received intelligence that sparked “very serious concern” further supporting his belief that investigations into the origin of COVID “cannot leave any stone unturned.”

In response to the letter, Grassley said the National Institutes of Health claimed it had not funded gain-of-function research on coronaviruses. However, new evidence casts doubt on those claims, said Grassley.

Fauci and his unit provided $3.4 million to the EcoHealth Alliance, which issued subgrants ranging from $600,000 to $826,000 to the Wuhan Lab to fund research on bat coronaviruses, Grassley said.

“That research could have strengthened the virus to the version that caused the global pandemic,” Grassley said.

Grassley said Fauci’s claims about not being able to guarantee what research was taking place in Wuhan is “complete nonsense.”