Russell Brand Brand points out the ludicracy of glamorizing people like Jeffrey Epstein and Bill Gates and their so-called philanthropic work, which Brand calls “a shield for corruption.” 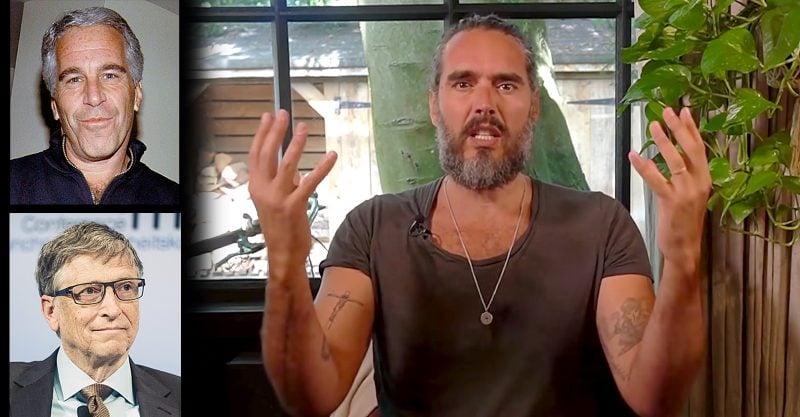 When it comes to sex offender Jeffrey Epstein and his contacts with powerful people, it’s clear this kind of corruption cannot exist in isolation, Russell Brand said in a recent video segment.

“It’s an institution, it’s cultural,” said Brand. The Epstein scandal “cannot go on for as long as it did and involve as many people as it did without it being accepted” and considered “ordinary and normal.”

Brand highlights a “CBS This Morning” interview with Miami Herald investigative journalist Julie Brown, who broke the story on Epstein when the mainstream refused to touch it.

Brown, widely known as the woman who took down Epstein, authored “Perversion of Justice,” a book that “recounts her uncompromising and risky investigation of Epstein’s underage sex trafficking operation, and the explosive reporting for the Miami Herald that finally brought him to justice while exposing the powerful people and broken system that protected him.”

The Epstein scandal exposes “corruption and the way information can be controlled,” said Brand. The crimes committed by Epstein are “not a problem in the eyes of the powerful,” said Brand. “It’s a problem that it’s being discovered.”

An article published in May by the Daily Beast reveals that Gates met Epstein “dozens of times starting in 2011 and continuing through 2014 at the financier’s Manhattan home — a substantially higher number than has been previously reported.”

Epstein is reported to have given Gates advice on how to end his “toxic” marriage to Melinda Gates.

“Gates, in turn, encouraged Epstein to rehabilitate his image in the media following his 2008 guilty plea for soliciting a minor for prostitution, and discussed Epstein becoming involved with the Bill & Melinda Gates Foundation.”

Brand points out the ludicracy of glamorizing people like Gates and their so-called philanthropic work, which Brand calls “a shield for corruption.”

“How long can Bill Gates be positioned as a potential savior of the planet when it seems he has these peculiar relationships, bizarre interests, and many of the decisions that he makes appear to be extremely beneficial to one person in particular: Bill Gates. Whether it’s agriculture or vaccines or dabbling in tech or buying farmland — Bill Gates has got his finger in a lot of pies.”

The public might never know the truth about Epstein, his life, his death or his contacts, said Brand.

But one thing is clear, he said: You “can’t concentrate that much power, influence and political bias” in one area and expect people to “behave responsibly.”

And just because Epstein is dead, said Brand, doesn’t mean information about his crimes or with whom he associated with should die, too.

“Powerful people operating in clandestine circles, exploiting people,” said Brand, “needs to be addressed at a large and significant level.”