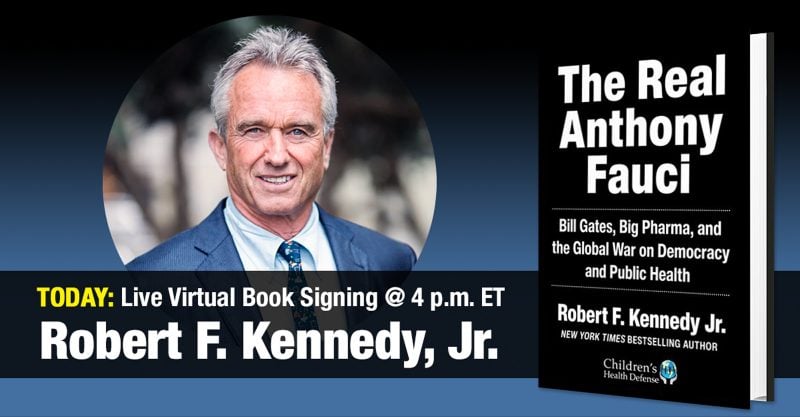 “Kennedy’s book proves beyond a shadow of doubt what many Americans have come to learn about Fauci that he has stifled open debate to the point of stagnation of biomedical science.” — James-Lyons Weiler, Ph.D., biomedical research scientist

CLICK HERE to pre-order your autographed copy of “The Real Anthony Fauci.” Autographed copies will be available while supplies last.

CLICK HERE to watch today’s live virtual book signing at 1 p.m. PT / 4 p.m. ET here. Also, consider submitting a question on this page that Kennedy might answer during the event.

As director of the National Institute of Allergy and Infectious Diseases (NIAID), Dr. Anthony Fauci dispenses $6.1 billion in annual taxpayer-provided funding for scientific research. Fauci’s gargantuan yearly disbursements allow him to dictate the subject, content and outcome of scientific health research across the globe.

These annual disbursements also allow Fauci to exercise dictatorial control over the army of “knowledge-and-innovation” leaders who populate the “independent” federal panels that approve and mandate drugs and vaccines — including the committees that allowed the Emergency Use Authorization of COVID-19 vaccines — recently, for children as young as 5 years old.

Fauci uses the financial clout at his disposal to wield extraordinary influence over hospitals, universities, journals and thousands of influential doctors and scientists — whose careers and institutions he has the power to ruin, advance or reward.

These are the same doctors who appear on network news shows, publish on the op-ed pages of influential media, and craft and defend the pharmaceutical cartel’s official narratives.

The authors of an op-ed published Nov. 2 in Newsweek pointed out just some of the failures Kennedy addresses in his book. Martin Kulldorff, Ph.D., an epidemiologist at Harvard Medical School, wrote in the op-ed that in private conversations, most of his scientific colleagues agree that Fauci’s COVID policies have done more harm than good, but few have spoken up out of fear of “financial censorship.”

“Many are afraid of losing positions or research grants, aware that Dr. Fauci sits on top of the largest pile of infectious disease research money in the world,” Kulldorff and his co-author Jay Bhattacharya, M.D., Ph.D., professor of Health Policy at Stanford University School of Medicine, wrote.

Kennedy’s book — which will be released Nov. 16 — goes into detail, not only on Fauci’s COVID-related failures, but also on his history of failures and unethical behaviors, including inhumane, unnecessary experiments on children and animals.

As Kennedy writes in his book:

“In 1965, my father kicked down the door of the Willowbrook State School on Staten Island, where pharmaceutical companies were conducting cruel and often-deadly vaccine experiments on incarcerated children.

“Robert Kennedy declared Willowbrook a ‘snake pit’ and promoted legislation to close the institution and end the exploitation of children.

“Fifty-five years later, national media and Democratic Party sachems have beatified a man who presided over similar atrocities, somehow elevating him to a kind of secular sainthood.

“What dark flaw in Anthony Fauci’s character allowed him to oversee — and then cover up — the atrocities at Incarnation Children’s Center?”

CLICK HERE to pre-order your autographed copy of “The Real Anthony Fauci.”