Before COVID Vaccine, Her Son Was a Healthy Athlete — Now He Can ‘Barely Walk,’ Mom Says

In an interview with Children’s Health Defense Chairman Robert F. Kennedy, Jr., on the “RFK Jr. The Defender Podcast,” Cherie Romney says both her husband and 17-year-old son suffered serious blood clots and were hospitalized after receiving COVID mRNA vaccines. 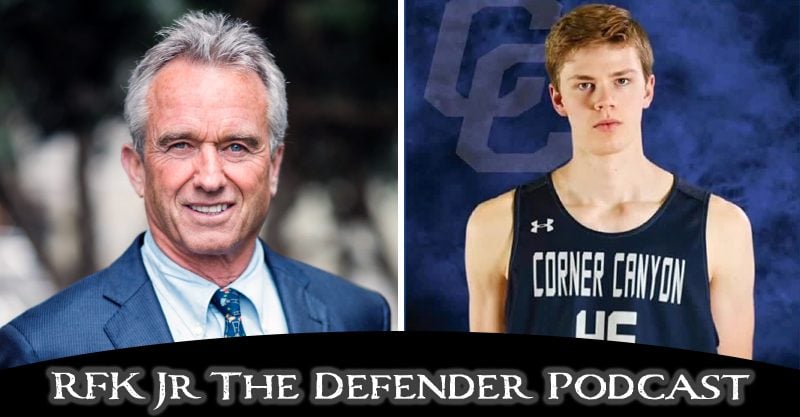 One day after getting the Pfizer-BioNTech COVID vaccine, Everest Romney became sick. Five days after being vaccinated, the 17-year-old was hospitalized when doctors discovered two blood clots in his brain.

Everest’s mother, Cherie Romney, told Children’s Health Defense Chairman Robert F. Kennedy, Jr. on the “RFK Jr. The Defender Podcast” her son, a varsity basketball player at Corner Canyon High School in Draper, Utah, was a very healthy athletic child who was in the middle of recruiting season for his school basketball team.

Now, the teen can barely walk.

Within 24 hours of getting the vaccine, Everest began experiencing an “exorbitant amount” of pain and swelling in his neck that originated on the same side he received the vaccine. Cherie took her son to the pediatrician, who diagnosed the teen with a pulled muscle and placed him in a neck brace.

The doctor was “pretty dismissive,” said Cherie. “We were sent home.”

But within 24 hours of the doctor’s visit, Everest got “one of the worst migraines he’s ever had.” It lasted nonstop for several days before Cherie took her son to the emergency room.

Everest, who has since been released and is in stable condition, was diagnosed with having two cases of cerebral venous sinus thrombosis, a rare type of blood clot that prevents blood from draining out of the brain.

Cherie’s husband, who received the Moderna vaccine, had a similar severe adverse reaction. He was hospitalized with a pulmonary infarction and lost about a fourth of his lung, permanently, said Cherie. An x-ray revealed he had over 100 blood clots in his lungs, she said. He has also since been released and is in stable condition.

Cherie told Kennedy she is not anti-vaccine, However, she encourages others to weigh the rewards against the potential risks when deciding whether or not to get the COVID vaccine.

“I think there are some people who would be tempted to think I’m a massive anti-vaxxer or to dismiss my message. It really is just that we have to gather all the information. You may not know enough right now. We may not be distributing it safely right now, especially if they’re distributing it to children.”