Sen. Rand Paul (R-Ky.) on Monday criticized the media and Dr. Anthony Fauci for spreading mistruths about COVID, and for their role in causing unnecessary deaths by politicizing the science around COVID vaccines and treatments. 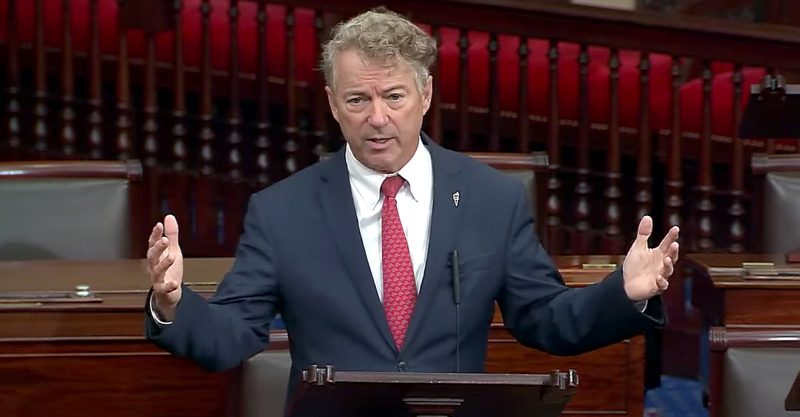 Sen. Rand Paul (R-Ky.) on Monday took to the podium on Capitol Hill to criticize the media and Dr. Anthony Fauci for spreading mistruths about COVID, and for their role in causing unnecessary deaths by politicizing the science around COVID vaccines and treatments.

“We’ve got Dr. Fauci spreading mistruths across the country, saying we’ve got to forcibly vaccinate the kids,” Paul said. “There’s no science behind any of that.”

Paul accused CNN and others of misleading the public on a host of COVID-related of issues, including the need to vaccinate children:

“For example, the one truth you won’t be told is an 85-year-old has a 10,000 times greater chance of dying [from COVID] than a 10-year-old. Now you think we should treat them the same. If you were their doctor, do you think a 10-year-old should get the same healthcare and the same prescriptions for what they need to do as an 85-year-old? Makes no sense at all.”

NY Times corrected article that said nearly 900,000 children have been hospitalized w/COVID in US when actual number is 63,000 + op-ed cited data showing unvaccinated child has less risk of being infected w/virus than a fully vaccinated 70-year-old.https://t.co/xXWqNBxyLe

Paul, who said he refused to get the COVID vaccine because he already had the virus, and has natural immunity, has been an outspoken critic of Fauci and the Biden administration for their handling of the pandemic.

In July, he accused Fauci of lying to Congress about approving funding for gain-of-function research at the Wuhan Institute of Virology, and called on the U.S. Department of Justice to investigate.

Paul told the U.S. Senate on Monday it’s time to stop censoring people just for asking questions about COVID policies, and get back to the ideas of classical liberalism, where “we debated things.”

“But if you’re a collectivist and you believe that from the very top down, all medical decisions come from Dr. Fauci and if he doesn’t want you to fly, you don’t get to fly … if an airline has a policy I don’t like, maybe I’d choose not to fly. But the idea that we’re going to restrict everyone’s behavior based on what they decide to do, what’s next?

“People eat too many cheeseburgers. We’re not going to give them a heart stent because we think they haven’t behaved and they haven’t listened to the doctors on what they should be eating. There is no end to this.”