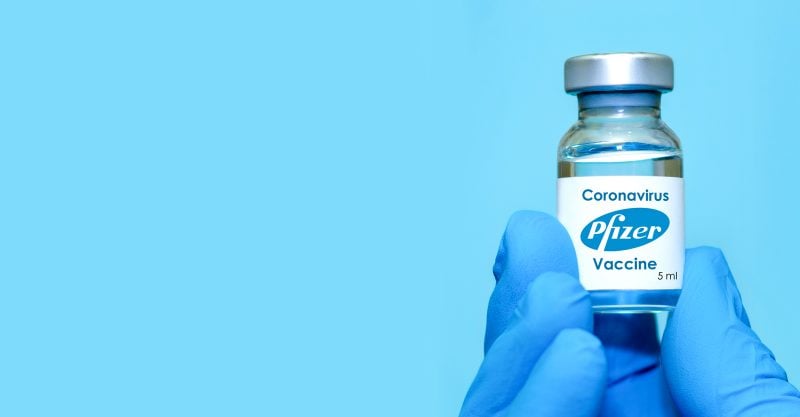 A recent study published in the journal Rheumatology found six women out of 491 patients who developed a skin rash known as herpes zoster (HZ) infection — or shingles — within three to 14 days of receiving either the first or second dose of the Pfizer’s COVID vaccine.

Out of 491 patients, six people — or 1.2% — experienced the infection, researchers said. Five of them developed the shingles infection after the first dose and one after the second.

Shingles occurs when the varicella zoster virus, which causes chickenpox, is reactivated after lying dormant in the cranial and spinal nerves in the body. It then travels along affected nerves to the area of the skin served by those nerves, where it causes a distinctive, stripe-like rash on one side of the face or body.

Shingles is a painful and itchy condition consisting of blisters that scab over in seven to 10 days and take two to four weeks to fully resolve. The most common complication is postherpetic neuralgia — severe and debilitating nerve pain that can take months or years to clear up, according to the Centers for Disease Control and Prevention (CDC).

Lead researcher Dr. Victoria Furer said five of the six patients who developed HZ were young, had mild cases of autoimmune disease and were taking little if any medications for it — which means they should not have been at increased risk for developing the infection. HZ tends to develop more in people over the age of 50.

“That is why we reported on it,” Furer said.

Furer said that since her peer-reviewed article was published April 12, she has received emails from patients around the world who developed HZ after the vaccine. “It seems that the reason is that there is some association,” she told The Jerusalem Post.

“We cannot say the vaccine is the cause at this point,” Furer said. “We can say it might be a trigger in some patients.” She said further research, including a larger epidemiological study, would be needed to prove cause and effect.

A 27-year-old developed shingles two-and-a-half weeks after receiving the first COVID vaccine. “Anybody else have a similar experience?” the person asked in the post. “My doctor said there are anecdotes out there similar to mine.”

Another user responded that it was probably not a coincidence and entirely possible to awaken a shingles case after a vaccine. But infectious disease specialists disagreed.

“There is no scientific evidence of this [association],” said Dr. Aaron Glatt, chief of infectious diseases at Mount Sinai South Nassau in Oceanside, New York, and a spokesperson for the Infectious Diseases Society of America (IDSA).

Dr. William Schaffner, professor of medicine at Vanderbilt University Medical Center and spokesperson for IDSA, agreed there was no evidence of a link between shingles and the COVID vaccine.

“Other than the people who had serious prior allergic reactions, to date no other incidents of other medical events that exceed the normal background rate of those events in the community have been found,” said Schaffner, citing CDC data.

Both doctors said they weren’t surprised by the appearance of shingles cases, but explained that it was due to shingles occurring in one in three adults — mostly older.

“Almost 1 out of 3 people in the U.S. will develop shingles in their lifetime,” Glatt said. “With millions of older Americans getting their COVID vaccine, the risk of getting shingles increases with age.”

“Things happen, particularly with older adults,” Schaffner said. “We have to identify medical events that might be causal from coincidence. So far we don’t have any other events other than allergic reactions [linked to the vaccine].”

But according to the CDC’s Vaccine Adverse Events Reporting System (VAERS), 293 cases of HZ infection been reported in people who received COVID vaccines, with almost 30% of cases occurring in people 17 to 44 years old –– a demographic that is not the at-risk age group for shingles. Only 11% of cases occurred in people over 65. 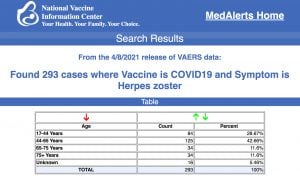 The VAERS data  is consistent with the findings of the study in Rheumatology, which showed that five of the six patients who developed HZ were young.

According to experts and the lead author of the study, the solution is not to forgo the COVID vaccine, but to get the shingles vaccine, a live attenuated vaccine associated with a risk of side effects, including Guillain-Barré syndrome, shingles, acute disseminated encephalomyelitis, transverse myelitis, meningitis, facial paralysis, vision problems and other injuries.