Peter Parada, drummer for the California-based band, Offspring, was dropped from the band’s upcoming tour because — on the recommendation of his doctor — he refused to get the COVID vaccine, since he has a history of Guillain–Barré syndrome and already has natural immunity to COVID. 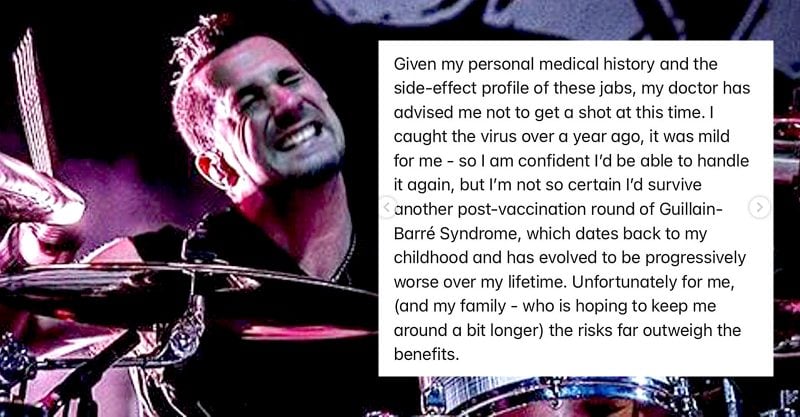 Parada said he was confident he could handle the virus again, but could not handle another round of post-vaccination GBS, which dates back to his childhood and has become progressively worse over his lifetime.

“The risks far outweigh the benefits,” he said.

Parada said he has no negative feelings towards the band. “They’re doing what they believe is best for them,” he said, “while I am doing the same.”

“There are countless folks (like me) for whom these shots carry a greater risk than the virus. Most of us don’t publicly share a private medical decision we made with careful consideration with our doctor. We know it’s not an easy conversation to unfold.

“If it looks like half the population is having a shockingly different reaction to these jabs than what was expected –– it’s probably because their life experiences have have actually been shockingly different, and their reasons range from a conscientious risk/benefit analysis, to the financial inability to take time off work/lack of healthcare in the event of potential side effects to an understandable distrust in the system that has never prioritized the health and well-being of their communities.”

In a series of tweets, Parada said he unequivocally supports informed consent — “which necessitates choice unburdened by coercion” –– and does not find it “ethical or wise” to allow those with the most power, including government, corporations, organizations or employers to “dictate medical procedures to those with the least power.”

I do not find it ethical or wise to allow those with the most power (government, corporations, organizations, employers) to dictate medical procedures to those with the least power. 10/17

Parada encouraged others to make room for all perspectives and to refrain from dehumanizing, dominating or shutting down the voices of the vaccine-hesitant.

Offspring has not commented on Parada’s statement. Parada has played with the group since 2007, and is featured on their four most recent albums.

Parada joins a number of vaccine-hesitant celebrities in the music world, including Eric Clapton — who suffered an adverse reaction to AstraZeneca’s vaccine — Ian Brown, Richard Ashcroft, Van Morrison and Noel Gallagher, who have all voiced concerns over COVID vaccines.

.@EricClapton shares details about his painful reaction to the COVID vaccine, and how he felt alienated from friends after mainstream media blasted him for speaking out.

For those with long-lasting natural immunity, vaccines provide no benefit

Since the first COVID vaccine received Emergency Use Authorization in the U.S., some physicians and scientists have challenged the Centers for Disease Controls and Prevention’s (CDC) vaccine recommendations, citing the lack of science to support vaccinating those who’ve acquired natural immunity.

According to a Cleveland Clinic study released in June, individuals who have had SARS-CoV-2 infection are unlikely to benefit from COVID vaccination.

The study’s conclusion supports what others, including Dr. Anthony Fauci, have said about immunity in those previously infected with the virus — that it is unlikely people can get COVID more than once.

During a May 24 interview with John Catsimatidis on his radio show WABC 770 AM, Sen. Rand Paul (R-Ky.), a physician, said he was making the personal decision not to get vaccinated because he already had COVID and had acquired natural immunity. Paul said there was no evidence to support vaccinating people who’ve already had the disease.

Paul said people are getting re-infected in large numbers after being vaccinated, but people are not getting reinfected after having the disease naturally.

According to a recent CDC study, 74% of people infected in a recent COVID outbreak in Barnstable County, Massachusetts were fully vaccinated.

According to Paul, vaccines are created to attempt to replicate the immunity we get from having been infected with a disease. “Vaccines are a replacement for natural immunity,” he said. “They aren’t necessarily better. In fact, natural immunity from measles confers lifelong immunity and the vaccine immunity wanes over a few decades.”

“The amount of (immune) memory (gained from natural infection) would likely prevent the vast majority of people from getting … severe disease, for many years.”

During a meeting June 23 with members of a CDC’s advisory committee Dr. Leslie Moore, physician and mother, challenged the data on COVID vaccines saying it is atrocious and frightening.

“Natural immunity is always better than vaccine immunity — anyone who says otherwise needs to go back to medical school,” Moore told committee members.

“In the case of SARS-CoV-2, we know that the virus naturally infects the heart, the inner lining of blood vessels, the lungs and the brain. So, these are likely to be some of the critical organs that will contain persistent viral antigens in the recently infected — and, following reactivation of the immune system by a vaccine, these tissues can be expected to be targeted and damaged.”