The Occupational Safety and Health Administration today issued an emergency temporary standard giving employers with more than 100 employees, which affects 84 million workers, until Jan. 4 to comply with President Biden's COVID vaccine mandate or employers face fines up to $136,532. 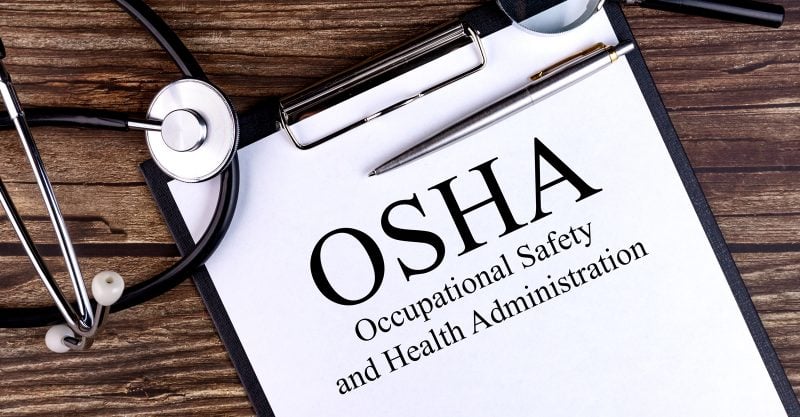 The mandate covers more than 84 million workers and two-thirds of the nation’s private-sector workforce.The 490-page rule, which will be published in the Federal Register on Nov. 5, says:

“covered employers must develop, implement and enforce a mandatory COVID-19 vaccination policy, with an exception for employers that instead adopt a policy requiring employees to either get vaccinated or elect to undergo regular COVID-19 testing and wear a face covering at work in lieu of vaccination.”

However, employees who choose not to get vaccinated must foot the bill for tests, officials said. There is also no exception to the vaccine mandate for those who have natural immunity from previous Sars-CoV-2 infection.

There is no requirement under the rule that employers report COVID vaccine injuries that result from the mandate.

If you haven’t watched this yet, watch it now!https://t.co/ORu6QokREr

The ETS applies only to non-federal employees who report to the workplace. It does “not apply to employees while they are working from home, or employees who work exclusively outdoors.”

OSHA plans to send agents into the workplace to ensure employers are in compliance with the rule. If a company commits a willful violation, it can be fined up to $136,532, a White House official said during a Nov. 4 press briefing.

The standard penalty is $13,653 for a single violation but could increase with subsequent violations.

According to OSHA, the ETS is intended to preempt all state and local laws. “In particular, OSHA intends to preempt any state or local requirements that ban or limit an employer from requiring vaccination, face-covering or testing,” a summary of the ETS states.

“Keep in mind that the OSHA rule coming out is not a mandate for a vaccine,” a White House official said. “Employers can put in a mandatory vaccination program, or there’s the other route of vaccination for those who choose to and testing and masks for those other employees that don’t.”

Companies with more than 100 employees will have until Jan. 4 to have their staff fully vaccinated with two doses of an mRNA vaccine (Pfizer or Moderna) or one dose of Johnson & Johnson (J&J), after the White House said today it would push back its federal contractor vaccine mandate deadline from Dec. 8 to Jan 4.

On July 30, Biden ordered federal workers and contractors to be vaccinated, with no testing option. Federal workers have until Nov. 22 to get the shots, NPR reported.

OSHA said it will help employers develop their vaccine-or-testing requirement by providing sample plans, fact sheets and answers to frequently asked questions, and will begin outreach to businesses.

The CMS rule will also go into effect on Jan. 4 and applies to more than 17 million clinical and non-clinical workers at 76,000 healthcare facilities nationwide that receive federal funding from Medicare and Medicaid. Unlike the OSHA Rule, there will be no option for weekly testing in place of vaccination.

The Office of Management and Budget completed its review of the emergency temporary standard on Monday.

“Bottom line is vaccination requirements work,” a Whlte House official said Wednesay, in anticipation of today’s announcement by OSHA. “The actions we’re taking tomorrow will lead to millions of Americans being vaccinated, protecting workers, saving lives, strengthening our economy and helping to accelerate our path out of this pandemic.”

States and lawmakers vow to sue Biden over vaccine mandates

After OSHA released its ETS today, a group of lawmakers said they plan to introduce a resolution to strike down the vaccine mandate.

In a statement issued today, Rep. Virginia Fox (R-N.C.), House Education and Labor Committee leader, confirmed GOP lawmakers on her committee will “introduce immediately a Congressional Review Act resolution to nullify OSHA’s ‘emergency’ rule when it is received by Congress.”

More than three dozen Senate republicans are moving to formally nullify Biden’s vaccine mandate on private employees under the Congressional Review Act — the official process for Congress to eliminate an executive branch rule.

​​”Now, when we’re finally at kind of an equilibrium, you’re putting an ultimatum on them,” Sen. Mike Braun (R-Ind.), a businessman and member of the Senate Subcommittee on Employment and Workplace Safety, told Fox News. “Either get the vaccine or lose your job.”

The mandate would be “the single biggest disruptor in one fell swoop” to the business community, Braun said.

In response to OSHA’s announcement, the Texas Attorney General Ken Paxton announced plans in a tweet to sue Biden once this “illegal, unconstitutional regulation hits the Federal Register.”

Biden just announced his plan to wield OSHA to mandate vaccines on private businesses. And I’m announcing my plan to sue him once this illegal, unconstitutional regulation hits the Federal Register.

This morning, the Biden Administration released their guidance through OSHA that affects over 100 million Americans.

I am announcing that today, we are joining a lawsuit against the Biden Administration’s unconstitutional vaccine mandates.@JoeBiden, see you in court. pic.twitter.com/sA3xnEIYuQ

Missouri Attorney General Eric Schmitt announced today he will file a lawsuit against the Biden administration over the vaccine mandate as soon as it hits the Federal Register on Friday.

“We will be on file first thing tomorrow morning to halt this illegal, unconstitutional attempt by the Biden Administration and the federal government to impose their will on thousands of Missouri businesses and millions of Missourians,” Schmitt said. “Missouri will not roll over, we will not back down — we will file suit imminently.”

The OSHA rule reads like the manifesto of a mad tyrant.

We’ve always known forced masking isn’t about science — it’s about power & control & now the Biden Administration wants it to be a federal punishment for choosing to not get vaccinated. #NoVaccineMandates #NoMaskMandates pic.twitter.com/9nckWuuqNz

In a series of tweets, Ben Shapiro, New York Times best-selling author and editor of The Daily Wire, said:

1. Forcing it on employers with under 100 employees.
2. Forcing fully vaccinated people to be masked.
3. No exceptions for prior immunity.
4. Getting rid of testing as an alternative to vaccination.
5. Testing more than weekly.
6. Higher standards for masks.

In other words, this is only the beginning of authoritarianism, according to Shapiro. If made permanent, the OSHA rule would be far more onerous. “They could push a national vaccination and mask mandate,” he said.

If Biden’s OSHA & Fed contractor vax mandates are strictly applied to truckers, there will be a supply chain disaster.

37% of truckers say they’ll quit, retire, or switch jobs if the mandate hits them. Some can switch to smaller companies, but if 5% quit or retire, it’ll be BAD!