“This isn’t even about vaccination, it’s about fundamental rights,” said New York teacher, founder of Teachers for Choice and protest organizer, Michael Kane. Kane announced Wednesday he is leaving the United Federation of Teachers because the union won’t back teachers who are opposed to the mandates. 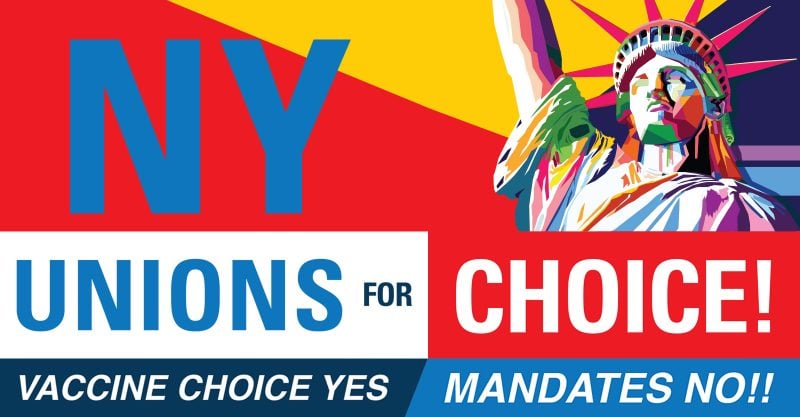 Some, including New York City teacher Michael Kane, announced they are quitting unions that won’t stand up for their members who support freedom of choice.

“The United Federation of Teachers is no longer a union,” said Kane, founder of Teachers for Choice. “What union in history has ever actively worked to have their members placed on unpaid leave or fired?”

“This is one of the saddest days of my life. I’ve been a progressive unionist since before I was ever in a union. My father was a bricklayer, my mother a letter carrier, I have a dozen teachers in my family. But I refuse to continue to give one more dime to a corrupt union that represents the interests of a political party over the interests of its membership.”

Kane made the announcement in response to Mayor Bill de Blasio requiring all New York teachers and Department of Education employees to get the COVID vaccine, and de Blasio’s announcement earlier this month that New York City residents will now be required to show proof of vaccination in order to enter indoor dining facilities, gyms, bars, Broadway shows and more.

“This isn’t even about vaccination, it’s about fundamental rights,” said Kane, who urged other union members to also resign their membership in protest.

CHD President Mary Holland, who spoke at the protest, said the group wasn’t protesting the vaccines, it was protesting the city’s failure to recognize freedom of choice.

“Mandating any medical procedure to the citizens of this country for any reason is unconstitutional and violates the Nuremberg Code. Even if the procedure or product has a good safety profile — which these vaccines definitely do not — it would be a mockery of the democratic principles upon which our country was founded to declare vaccination a requirement for employment or patronage of businesses.”

Holland and others told the crowd that growing numbers of people throughout the U.S. are expressing concern over mandates in general and of the safety of COVID vaccines in particular.

They pointed to the Vaccine Adverse Event Reporting System (VAERS), the database of the U.S. Department of Health and Human Services. VAERS data show that between between Dec. 14, 2020 and Aug. 13, 2021, a total of 595,622 total adverse events were reported to VAERS, including 13,068 deaths.

In comparison, after approximately 50 deaths following swine flu vaccination in 1976, that vaccine campaign was immediately aborted.

“In this case, what happens in New York won’t stay in New York,” Kane said. “America cannot afford to allow such dangerous precedents to be set. These authoritarian restrictions will be picked up and duplicated at all levels of government throughout the country, severely impacting our freedom to move about freely, congregate and to determine our own healthcare preferences.”

Kane added: “The time for people who care about freedom and liberty to fight back against tyranny is now.”