‘A Letter to Liberals’: Why I Wrote It and Why I Hope You’ll Read It

Robert F. Kennedy, Jr.’s latest book, “A Letter to Liberals — Censorship and COVID: An Attack on Science and American Ideals,” is available now to download free, or buy from Amazon and other retailers. 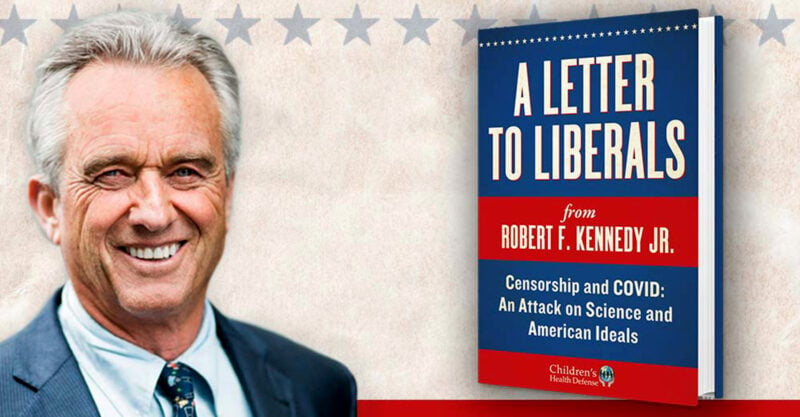 “Attacks on me, quite frankly, are attacks on science. … So if you are trying to, you know, get at me as a public health official and scientist, you’re really attacking not only Dr. Anthony Fauci, you’re attacking science … You have to be asleep not to see that.” — National Institute of Allergy and Infectious Diseases Director Dr. Anthony Fauci, “Meet the Press,” June 9, 2021

It is troubling enough that Dr. Anthony Fauci, our country’s leading public health technocrat and the fiat leader of the National Institutes of Health (NIH) — the world’s principal funder of scientific research — would make such a narcissistic and scientifically absurd statement.

The more serious concern is that the majority of my political party — the Democrats — and the mainstream media generally accept Fauci’s assertion as gospel.

Journalists — even science journalists — act as if they believe any pronouncement by Fauci (or the U.S. Food and Drug Administration, Centers for Disease Control and Prevention or World Health Organization) should mark the end of scientific inquiry.

My latest book, “A Letter to Liberals — Censorship and COVID: An Attack on Science and American Ideals,” emerged from a congenial and ongoing conversation during the COVID-19 pandemic between myself and my longtime friend and former law partner, John Morgan, a lifelong champion of the Democratic Party and liberal values.

I invited John, who reveres Fauci and accepts the scientific validity of the government’s COVID-19 countermeasures, to reengage his critical thinking skills and accept my challenge to a science-based debate — and he did.

I hope this free book will encourage other liberal Democrats to do the same — because that’s the kind of dialogue we need in order for democracy to function.

In what was arguably one of the most important speeches in American history, President Dwight D. Eisenhower — a Republican — warned our citizenry against the type of misplaced faith in federal scientific bureaucrats we are witnessing today.

“The potential for the disastrous rise of misplaced power exists and will persist. … We must never let the weight of this combination endanger our liberties or democratic processes. …

“In this revolution, research has become central; it also becomes more formalized, complex, and costly. A steadily increasing share is conducted for, by, or at the direction of, the Federal government. … The prospect of domination of the nation’s scholars by Federal employment, project allocations, and the power of money is ever present — and is gravely to be regarded. …

“We must … be alert to the … danger that public policy could itself become the captive of a scientific-technological elite.”

It is my hope that “A Letter to Liberals” will remind all Americans that blind faith in authority is a feature of religion and autocracy — not of science or democracy.

To that end, this letter is a challenge to my fellow liberals to reexamine the scientific assertions upon which rest the oppressive policies that have savaged the presumptions of classical liberalism and the U.S. Constitution.

It is past time our nation had an open conversation about the strategies supposedly enacted for ending the pandemic, and the best measures for avoiding future crises.

Download my free book — “A Letter to Liberals” — here.