Why Ivermectin Is Superior to Pfizer’s Antiviral Pill

Comedian and political commentator Jimmy Dore discusses a video by John Campbell, Ph.D. where he explains the similarities between Pfizer’s expensive new antiviral drug for COVID and ivermectin, and why ivermectin is better. 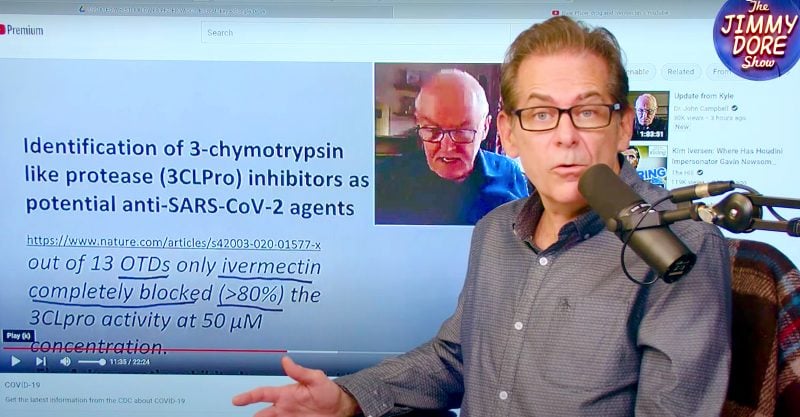 On the latest episode of “The Jimmy Dore Show,” comedian and political commentator Jimmy Dore highlighted the similarities between Pfizer’s expensive new antiviral drug for COVID and ivermectin, a generic drug used to treat the virus.

“I’ve never seen the propaganda machine so hard at work as it’s been against ivermectin,” said Dore. “Ivermectin won a Nobel Prize for human medicine in 2015, but the media really has everyone believing it’s for horses.”

Dore suggested the motivation behind the propaganda is profits.

“But there’s another drug, which is generic, called ivermectin, which works in the exact same way as the Pfizer antiviral,” Campbell said. “And there is conclusive proof from the scientific literature that the modality of action of the two drugs is the same. Both of these drugs inhibit viral replication.”

Campbell showed the molecular structure of Pfizer’s new drug and compared it to the molecular shape of ivermectin. He conceded the two “are completely different looking molecules” which led him to conclude “it’s absolutely fine to patent” the Pfizer drug.

“So they’re going to be able to make a lot of money out of it for the next 20 years,” he said.

Campbell cited a number of scientific papers which highlighted ivermectin’s effectiveness as an antiviral against COVID, including:

Campbell also pointed to a paper from Frontiers in Microbiology, which he said showed ivermectin not only attacked and bound to COVID’s spike protein which stopped it from infecting the cell, but also bound to the cell receptor.

“So it doesn’t just work one way, but two different ways,” explained Dore. “It double screws it up so you can’t get COVID.”

Campbell put it this way: “Not only does ivermectin bend the COVID key, but it also ruins the lock.”

“Why don’t you know this?” Dore asked. “Because ivermectin is cheap, and we live in a world that is made up of corporate propaganda.”