In an interview with The Defender, 18-year-old Isaiah Harris and his father described how Isaiah had to be hospitalized within 48 hours of his second dose of the Pfizer vaccine and subsequently had a heart attack. 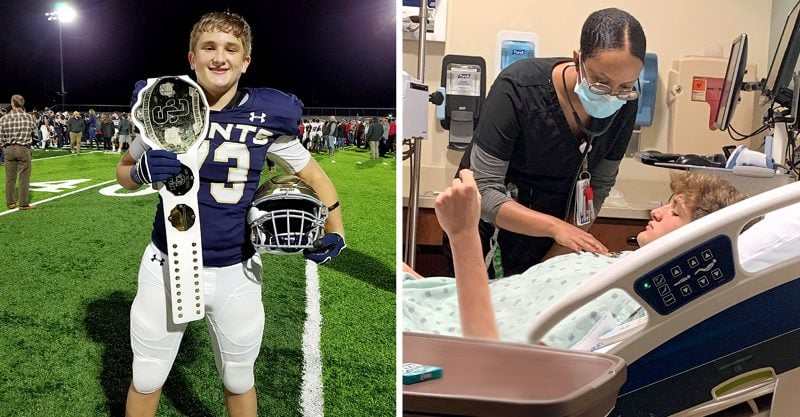 An 18-year-old from Springdale, Arkansas, who had a heart attack after receiving his second dose of Pfizer’s COVID vaccine said he’d rather get COVID than have a heart attack.

In an interview with The Defender, Isaiah Harris said he received his first dose of Pfizer on April 8 and second dose on April 30. Within 12 hours of the second dose, the teen developed a fever and chills. His father, Justin Harris, initially didn’t think much about it because he got sick after both doses of the Moderna vaccine, although his symptoms weren’t serious.

Harris said it wasn’t until his wife — who was the only one allowed with Isaiah in the hallway due to COVID restrictions — told the staff multiple times her son was having a heart attack that they put him in a room and ran the EKG.

Isaiah’s EKG was abnormal and his numbers kept getting worse. At one point, 80% of Isaiah’s heart was inflamed and only 40% was functioning. Isaiah’s troponin levels were so high doctors said he had suffered a heart attack.

“Doctors kept denying it was the vaccine,” Harris said. “They didn’t want to say it was that. Then a nurse brought in a study showing the vaccine could cause myocarditis.”

Isaiah was hospitalized for four days for “acute myocarditis,” Harris said. “Doctors were saying six months of total bed rest with medications to numb his heart. That’s when I got a hold of the surgeon general of Arkansas and he gave us the link to VAERS because the hospital didn’t do anything.”

Harris said he is bothered that the CDC is “passing this off” and “isn’t doing thorough research into this.”

“The doctor at Cleveland is doing research on myocarditis. He’s seen 100 patients personally with myocarditis from the vaccine, and did early research on this when there were just 77 cases,” Harris said.

Isaiah, who graduated from community college as a senior in high school, said his condition right now is better than it was but he’s still in a little bit of pain.

“The swelling has gone down,” Isaiah said. “I used to lift every day but for three to six  months I cannot do any physical activity. The most I can do is walk my dog. If I get my heart rate up, it can reoccur and I could have another heart attack.”

Isaiah said he had no pre-existing conditions prior to suffering a heart attack. “I was fairly healthy. I lift quite a bit. I’m active. I used to play football. No history of viruses or myocarditis.”

When asked if he would recommend the vaccine to other teens, Isaiah said, “I am not anti-vaccine, but I do not think anyone should get this vaccine. Even in Canada I was talking to someone and it was being lowered to one dose for teens and they’re still having issues.”

“I’ll be honest with you. I used to think anti-vaxxers were different and my wife had already decided she wasn’t going to get the vaccine. For my other two boys, it was an option for them, but they opted out. Isaiah decided because he’s more social to get the vaccine and now I’m totally against it. The doctors said Isaiah cannot get the booster and vaccines are out for him.”

Harris said he’s totally against the vaccine, even though he got the Moderna shot, because the vaccines are causing myocarditis in older people, too. It’s just too dangerous and there aren’t enough studies, he said.

“Isaiah would have been better off to have COVID and be healthy than have a possible life-long issue with his heart, and now another possible heart attack if he over extends himself in the next three to six months,” Harris said.

“To look at Isaiah on the outside, he looks normal, but once you look at his numbers and the heart scans, it shows the inflammation — it shows a true case of myocarditis,” Harris said.

Harris said he thought he was doing the right thing and has an overwhelming feeling of guilt.

“I think you know, I feel as a parent — there were two sides of it. My wife didn’t want him to get vaccinated and as a dad, I wanted him to because Isaiah is very outgoing and he’s getting ready to enter pharmaceutical school at UAMS and I wanted him to be safe.

“Hearing the government push it — no matter if it was a republican or democrat president — this is what you need to do. I had hesitation but I did okay with Moderna. But I have an overwhelming guilt that I set up the appointment for Isaiah and encouraged him to go get it, even though he made his own choice. I helped him get the vaccine. I think as parents, maybe we need to step back and help educate ourselves and others. That’s why we finally shared his story — to educate people.”

Isaiah said, “I believe President Biden said in a recent statement that if you aren’t vaccinated, you’ll end up paying the price or you’ll have to wear a mask, but I’d rather have COVID than a heart attack.”

According to the latest data from VAERS, there have been 1,117 cases of myocarditis and pericarditis (heart inflammation) in all age groups reported in the U.S. following COVID vaccination between Dec.14, 2020 and June 11, 2021. Of the 1,117 cases reported, 686 cases were attributed to Pfizer, 391 cases to Moderna and 36 cases to Johnson & Johnson’s COVID vaccine.