"Today's Colorado River projections are … a dire warning for the American West to eliminate rampant corporate water abuse before it's too late," said Amanda Starbuck, Food & Water Watch research director, following news the U.S. Department of the Interior ordered Arizona, Nevada and Mexico to draw less water from the river, on which 40 million people rely. 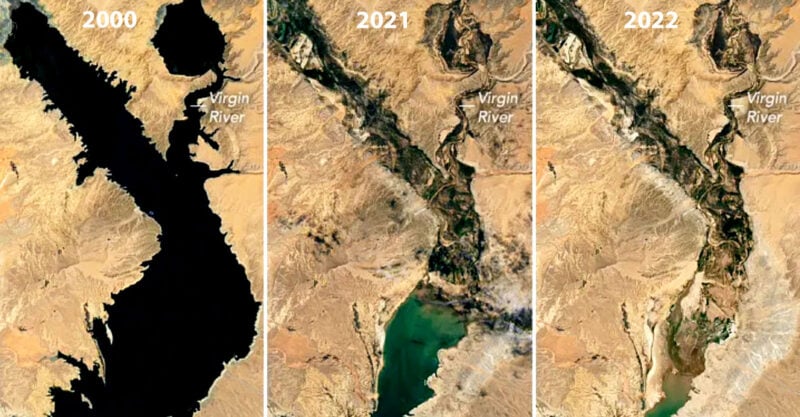 Amid extreme drought driven by the climate emergency and warnings of a possible “catastrophic collapse” of the dwindling Colorado River, the U.S. Department of the Interior on Tuesday announced the first-ever tier 2 shortage for the overdrawn vital waterway, triggering water use cuts in two Southwestern states and Mexico for 2023.

Based on projected water levels for 2023, the tier 2 shortage will force drought-ravaged Arizona, Nevada and Mexico to draw less from the Colorado River, upon which 40 million people in seven states and Mexico rely.

Arizona will face the biggest cut — 592,000 acre-feet, or about one-fifth of the state’s annual allocation, while an 8% reduction in Nevada is expected to have little impact in a state that recycles most of its indoor-use water and does not use its full allotment. Mexico’s allotment will be cut by approximately 7%.

The move came after Colorado River Basin states failed to meet a federal deadline at the end of Monday to come up with a plan to achieve a 15% reduction in water use, an amount scientists say is needed to prevent water stored in dangerously depleted reservoirs from dropping even further.

“Every sector in every state has a responsibility to ensure that water is used with maximum efficiency. In order to avoid a catastrophic collapse of the Colorado River System and a future of uncertainty and conflict, water use in the basin must be reduced,” Assistant U.S. Secretary for Water and Science Tanya Trujillo said in a statement.

“The Interior Department is employing prompt and responsive actions and investments to ensure the entire Colorado River Basin can function and support all who rely on it,” she added.

NEWS: Colorado River Basin states fail to meet federal deadline to submit plans to get to 2-4 maf in conservation.
Absent state agreement, the federal government is also not detailing how it plans to achieve that unprecedented level of conservation needed to protect reservoirs.

U.S. Bureau of Reclamation Commissioner Camille Touton said in June that in order to stabilize the Colorado River Basin, states and water districts must devise a plan by mid-August to cut 2 to 4 million acre-feet of water usage by next year.

One acre-foot equals the quantity of water needed to flood one acre a foot deep — approximately 326,000 gallons. Touton warned that the federal government would intervene if states could not come up with a plan on their own.

“Instead of singing ‘Kumbaya,’ it appears they’re sharpening their knives,” Kyle Roerink, executive director of the Great Basin Water Network, said of the riparian states in an interview with Marketplace.

“Instead of singing ‘Kumbaya,’ it appears they’re sharpening their knives.” https://t.co/LPXffE5e52

In a separate statement, Roerink alleged that “certain Upper Basin interests are holding the Bureau of Reclamation hostage at this point. They have called the Bureau’s bluff time and again. Nothing has changed with today’s news — except for the fact that the Colorado River system keeps crashing.”

“By switching to renewable energy sources like solar and wind, California could save 98% of the water currently needed for its fossil fuel production,” she continued.

“And by transitioning away from industrial mega-dairies, thirsty crops like almonds and pistachios, and engaging in regenerative farming, California will gain enormous water savings that could serve small farmers and domestic households.”

We must stop treating water like it’s a commodity to be traded, sold or squeezed from everyday people for the highest bidder, and we need to start holding Big Ag and Big Oil accountable for exploiting this resource that people need to live. https://t.co/8qHeN6ZLHJ

Historically, the Colorado River ran 1,450 miles from its headwaters high in the Rocky Mountains of northern Colorado into Utah, through the Grand Canyon in Arizona and along Nevada and California’s southeastern borders before flowing into the northernmost tip of the Gulf of California in Mexico.

An oasis in the desert that surrounds it for much of its course, the river sustained numerous Indigenous peoples both before and after the genocidal colonization of the Southwest, and since the U.S. conquered the region from Mexico it has been a lifeline for American settlers.

Around a century ago, Western states began dividing the Colorado’s water among them, building massive dams and channeling water hundreds of miles to sprawling farms on previously desert-like lands and to rapidly expanding arid cities including Los Angeles, Phoenix, San Diego and Las Vegas.

Every policymaker trying to solve the Colorado River problem needs to understand this simple fact: 80% of water used for human purposes in Western states is for agriculture. Just 20% is for cities. https://t.co/N1YzTFu1N2

Under the Colorado River Compact, states — without consulting Indigenous tribes — agreed to annual water allocations that they must use in full or face usage-based cuts the following year. This “use it or lose it” system has created what critics call absurd incentives for farmers to grow water-intensive crops in the desert.

Today, around three-quarters of the river’s flow is siphoned off to irrigate more than five million acres of farmland, according to the U.S. Bureau of Reclamation. Hydroelectric plants along the Colorado also generate more than 12 billion kilowatt hours of electricity annually.

In recent decades, the river has been running especially low as worsening droughts driven by the climate emergency have gripped the Southwest and as the population of the nation’s driest region explodes. The Colorado no longer empties into the sea; models predict that by the year 2100 its flow could be further reduced by more than half.

A year ago, the U.S. Department of the Interior declared the first-ever tier 1 water shortage for the Colorado River, prompting cuts to Arizona farmers amid historic drought.

Inadequate rain and snowfall over the past year have exacerbated the crisis, with Lake Mead — the largest U.S. reservoir and a product of damming the river — now at just 27% of its full capacity and Lake Powell expected to come within 5 feet of losing hydropower by early 2023.

John Entsminger, general manager of the Southern Nevada Water Authority and the state’s lead Colorado River negotiator, warned Monday in a letter to U.S. Interior Secretary Deb Haaland that the “unreasonable expectations of water users, including the prices and drought profiteering proposals, only further divide common goals and interests.”

“Through our collective inaction, the federal government, the basin states, and every water user on the Colorado River is complicit in allowing the situation to reach this point,” he continued.

“We are at the stage where basin-wide every drop counts, and every single drop we are short of achieving two to four million acre-feet in permanent reductions draws us a step closer to the catastrophic collapse of the system,” added Entsminger, “as well as draconian water management practices to protect health and human safety that we have successfully staved off in the past through cooperation.”