Gates told CBS News we might need a third shot of a currently available vaccine, or a “modified” vaccine as the virus mutates, but CHD’s RFK, Jr. asks why we haven’t focused instead on non-vaccine strategies, including therapeutic drugs. 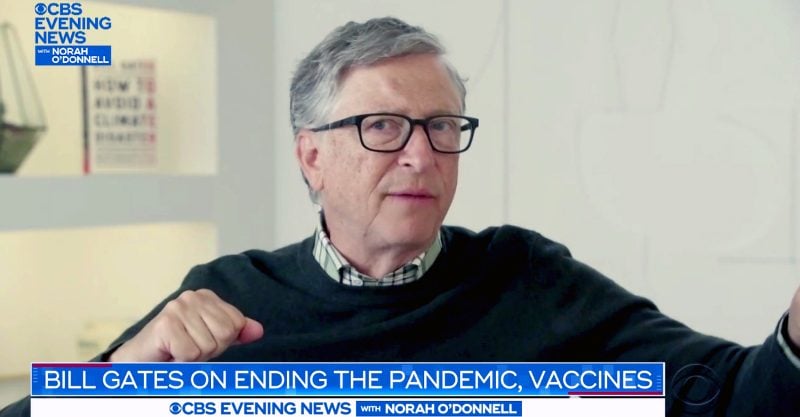 With more than 40 million Americans having received at least the first dose of the Pfizer or Moderna vaccine, a third dose may be needed to prevent the spread of new variants of the disease, Bill Gates told CBS News Tuesday.

Gates’ comments come amid growing concern that the current vaccines are not effective against the more contagious Brazilian and South African variants.

Pfizer and Moderna have stated that their vaccines are 95% and 99% effective, respectively, against the initial strain of COVID. However, some scientists have questioned those statements. Additionally, the World Health Organization and vaccine companies have conceded that the vaccines do not prevent people from being infected with COVID or from transmitting it, but are only effective at reducing symptoms.

U.S. vaccine companies are looking at making modifications, which Gates refers to as “tuning.”

People who have had two shots may need to get a third shot and people who have not yet been vaccinated would need the modified vaccine, explained Gates. When asked whether the coronavirus vaccine would be similar to the flu vaccine, which requires yearly boosters, Gates couldn’t rule that out. Until the virus is eradicated from all humans, Gates said, additional shots may be needed in the future.

“AstraZeneca in particular has a challenge with the variant,” Gates explained. “And the other two, Johnson & Johnson and Novavax, are slightly less effective, but still effective enough that we absolutely should get them out as fast as we can while we study this idea of tuning the vaccine.”

The Bill & Melinda Gates Foundation is funding the studies being conducted in Brazil and South Africa, CBS News said. The foundation has also invested in the AstraZeneca, Johnson & Johnson and the Novavax vaccines, which are being tested against new variants. Once the AstraZeneca vaccine is approved, the Global Alliance for Vaccine Initiative or GAVI, founded by Gates, will distribute it globally.

“Gates continues to move the goalposts,” said Robert F. Kennedy, Jr., chairman and chief legal counsel of Children’s Health Defense. “Meanwhile the strategies he and others have promoted are obliterating the global economy, demolishing the middle class, making the rich richer and censoring vaccine safety advocates, like me.”

Kennedy said that the exclusive focus on vaccines has prevented the kind of progress required to actually address and recover from the pandemic:

“From the pandemic’s outset, clear-headed people familiar with the challenges inherent in the vaccine model have understood that the path out of crisis would require multiple steps. Those steps would need to include the development and/or identification of therapeutic drugs, the sharing of information among doctors to hone improved treatment models that reduce infection mortality rates below those for flu, and the kind of broad-spectrum long-term herd immunity that protects against mutant strains and that only derives from natural infection.”

Instead, Gates and vaccine makers are proposing a lifetime of boosters, supporting insufficient testing to determine safety and failing to address the inadequate monitoring of vaccine injuries, Kennedy said.