Philanthrocapitalism has emerged over the last 30 years as a major force with the potential to “push the future of our planet towards extinction and ecological collapse,” ... 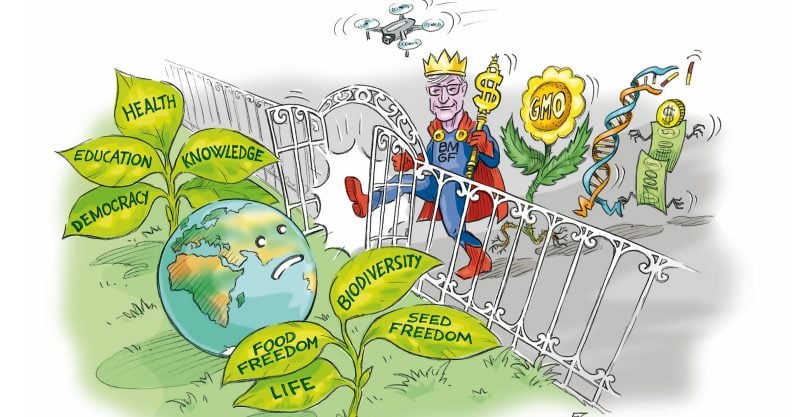 Philanthrocapitalism — epitomized by the Bill & Melinda Gates Foundation — has emerged over the last 30 years as a major force with the potential to “push the future of our planet towards extinction and ecological collapse,” according to a report launched Wednesday by Navdanya International.

“Gates to a Global Empire” sheds light on how philanthrocapitalism accelerates the corporate takeover of our seed, agriculture, food, knowledge and global health systems, and how it manipulates information and erodes democracies — all in the name of corporate profits.

The report explores how the Gates Foundation, powered by an “unholy alliance” between big capital, science and technology institutions and states, has established a global empire over life, through monocultures, patents and monopolies designed to destroy the natural world of diversity, self-organization and freedom.

In her introduction to the report, Navdanya International’s founder, Vandana Shiva, said:

“The European Court of Justice has ruled that gene-edited organisms are GMOs. However, Gates is hastily pushing for deregulation with no regard for caution or potentially dangerous consequences. His ‘Gates AgOne’ … initiative is a clear declaration of his intent to create an Empire over life and biodiversity, over food and farming, and over our daily bread.”

With a net worth of nearly $117 billion, Gates is now the most powerful philanthropist in modern history, according to a synthesis of the report. After making technology available to the masses through his popularization of the at-home personal computer, the founder of Microsoft has “taken to reinventing himself as a benevolent philanthropist who uses his technologic influence and private market savvy to solve the world’s most pressing problems through his and his wife’s foundation: The Bill & Melinda Gates Foundation.”

Through its various initiatives, sub-organizations, development schemes and funding  mechanisms, Gates weaves, according to the report, “an intricate web of wide-ranging power and influence.”